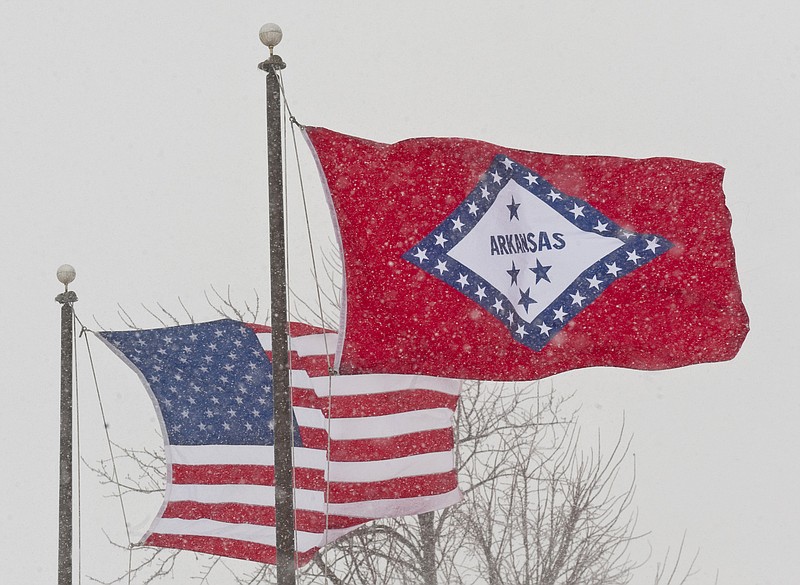 FILE - In this Feb. 1, 2011 file photo, an American and Arkansas flag blow in the wind as snow falls in Fayetteville, Ark. (AP Photo/Beth Hall, File)

Arkansas' seasonably adjusted unemployment rate ticked upward in November, increasing one-tenth of a percent to 3.7% from 3.6% in October, according to the Arkansas Division of Workforce Services.

Mervin Jebaraj, director of the Center for Business and Economic Research at the Sam M. Walton College of Business at the University of Arkansas said while Arkansas' month-over-month increase wasn't statistically significant, the year-over-year comparison shows the labor market is slowing down. He said the increase in the unemployment rate was expected with interest rate increases pumping the breaks on the broader economy, compared with the lower unemployment rates and hotter job market earlier this year and even as recently as the summer.

"This is by design," he Jebaraj said.

Earlier this week, the Federal Reserve raised its benchmark interest rate by half a percentage point to a 4.25% to 4.5% target range. The move comes after four 75 basis point increases in a row, the fastest pace of increases since the 1980s.

Utah posted the lowest unemployment rate nationally for November at 2.2%, followed closely by Minnesota and North Dakota each with 2.3%. Nevada had the highest rate for the month with 4.9%, followed by Illinois with 4.7%.

Michael Pakko, chief economist at the Arkansas Economic Development Institute said Arkansas was one of the few states that reported significant increase in unemployment when compared to the year ago. He noted the state still is sitting below 4% unemployment, a rate typically considered full-employment.

He said the Arkansas' job market is starting to show weakness, with negative numbers in this month's report including eight of the 10 sectors showing job losses. Pakko noted the number of the state's unemployed has ticked up for eight months in a row and this month nearly every sector saw job losses.

"It's starting to look more like a trend," Pakko said.

In Arkansas, the state's nonfarm payroll jobs were down by 5,400 in November when compared to the previous month, totaling 1,329,200. Eight major industry sectors lost workers for the period. The trade, transportation and utilities and the education and health services sectors were the only ones to post gains month over month.

When compared to November of last year, nonfarm payroll jobs in Arkansas were up by 18,000. Eight major industry sectors reported job growth, with the manufacturing sector leading the way with 4,600. For the year, the construction sector lost 1,400 jobs and professional and business services dropped 1,000.