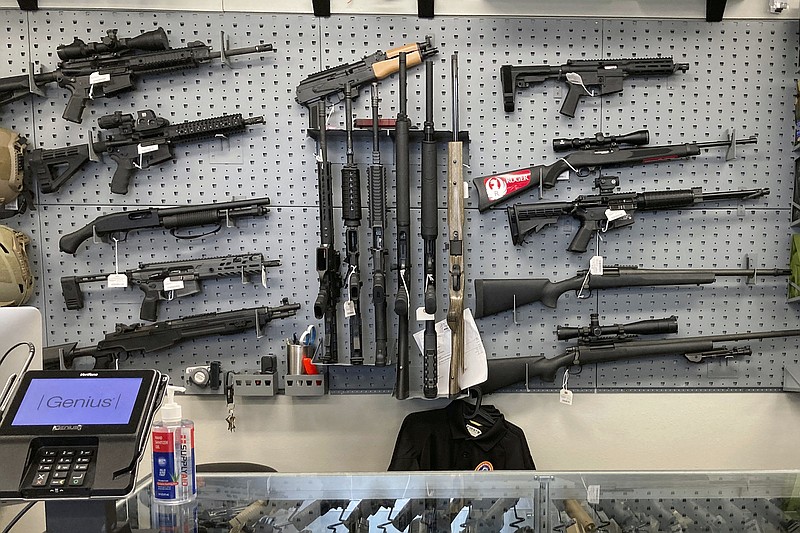 FILE - Firearms are displayed at a gun shop in Salem, Ore., on Feb. 19, 2021. A federal judge in Portland, Ore., ruled Tuesday, Dec. 6, 2022, that a new voter-passed ban on high-capacity gun magazines can go into effect Thursday, Dec. 8, but placed a 30-day hold on a permit-to-purchase requirement after local and state law enforcement agencies said they could not have a permitting system ready in time. (AP Photo/Andrew Selsky, File)

PORTLAND, Ore. -- A ruling by a state court judge placed Oregon's tough new voter-approved gun law on hold late Tuesday, just hours after a federal court judge allowed the ban on the sale and transfer of high-capacity magazines to take effect this week.

The ruling by Harney County Judge Robert Raschio threw the implementation of Measure 114 -- set for Thursday -- into limbo and Oregon Attorney General Ellen Rosenblum said on Twitter that her office will urgently appeal to the Oregon Supreme Court. That filing is likely to come this morning.

"It's been a busy day for Measure 114, Oregon's new gun safety law, which is supposed to go into effect Thursday. A federal and a state judge both issued rulings today," the Twitter thread said. "As of now, the law cannot go into effect on Thursday."

The lawsuit in Harney County, filed by Gun Owners of America Inc., the Gun Owners Foundation and several individual gun owners, sought to have the entire law placed on hold while its constitutionality is decided. The state lawsuit specifically makes the claims under the Oregon Constitution, not the U.S. Constitution -- and that means for now, Raschio's ruling is binding in the entire state.

Earlier Tuesday, a federal judge in Portland had delivered an initial victory to proponents of the sweeping gun-control measure narrowly approved by Oregon voters last month.

U.S. District Judge Karin Immergut allowed the ban on the sale and transfer of new high-capacity magazines to take effect Thursday. She also granted a 30-day delay before the law's permit-to-purchase mandate takes effect, but did not quash it entirely as gun rights advocates had wanted.

Measure 114 requires a permit, criminal background check, fingerprinting and hands-on training course for new firearms buyers. It also bans the sale, transfer or import of gun magazines over 10 rounds unless they are owned by law enforcement or a military member or were owned before the measure's passage. Those who already own high-capacity magazines can only possess them in their homes or use them at a firing range, in shooting competitions or for hunting as allowed by state law after the measure takes effect.

Gun sales and requests for background checks soared in the weeks since the measure was approved because of fears the new law would prevent or significantly delay the purchase of new firearms under the permitting system.

Multiple gun rights groups, local sheriffs and gun store owners have sued, saying the law violates Americans' constitutional right to bear arms. All of those lawsuits were filed in federal courts except for the one in Harney County, a gun rights group said late Tuesday.

"We are, of course, deeply troubled by the ruling that came out of the Federal Court today. We are also grateful for the opposing ruling from the Harney County Judge this afternoon," the Oregon Firearms Federation wrote. "But no matter what, there is a long way to go."

The interfaith coalition that placed Measure 114 on the ballot said earlier Tuesday it appreciated the federal judge's ruling and understood the need for a delay in the permit-to-purchase provision to sort out the process.

"We'd like to see the permitting in place this week because that would save lives, but at the same time we understand that it will take longer to do it well," said Mark Knutson, chairman of the Lift Every Voice Oregon campaign and pastor at Portland's Augustana Lutheran Church. "For us, it's all about saving lives and safety."

Knutson did not return a call late Tuesday about the state ruling.

Amid the uncertainty, gun sales spiked in Oregon in the past month.

The Oregon State Police reported more than 35,000 pending background check transactions for gun purchases as of last week and was averaging 3,000 requests a day compared to less than 900 a day the week before Measure 114 passed, according to agency data. On Black Friday, the agency received 6,000 background check requests alone, OSP Capt. Kyle Kennedy said in an email.

Gun store owners also reported a run on guns, with sales in some stores increasing four- or five-fold in recent weeks.

Measure 114's fate is being carefully watched by both gun rights advocates and those who want stricter limits on gun ownership because it is one of the first to take effect after a U.S. Supreme Court ruling in June that struck down a New York law that placed limits on carrying guns outside the home.

Information for this article was contributed by Lindsay Whitehurst of The Associated Press.