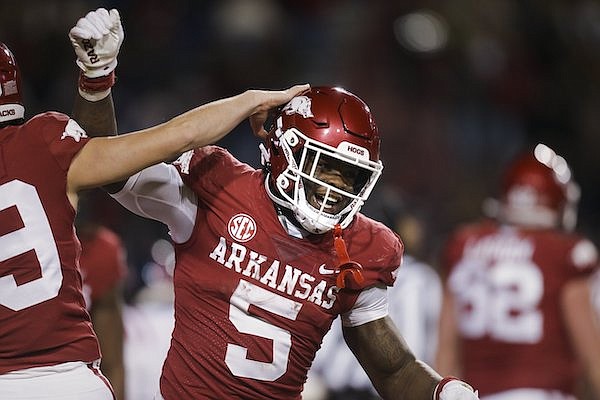 Arkansas running back Raheim Sanders (5) celebrates a touchdown during a game against Ole Miss on Saturday, Nov. 19, 2022, in Fayetteville.

FAYETTEVILLE — Five Arkansas football players were voted All-SEC on Monday by members of The Associated Press.

Drew Sanders, who transferred from Alabama prior to the season, ranked second in the SEC with 9.5 sacks and led the Razorbacks with 103 tackles and 13.5 tackles for loss. Sanders also intercepted a pass and forced three fumbles.

His sack total narrowly trailed his former teammate Anderson, who led the league with 10 sacks. Sanders is one of five finalists for the Butkus Award as the nation’s best linebacker.

Stromberg was Arkansas’ highest-rated offensive lineman by Pro Football Focus and finished the season with a grade of 82.0. He declared for the NFL Draft last week and will not play in the Razorbacks’ game against Kansas at the Liberty Bowl on Dec. 28.

PFF gave Limmer and Wagner similar grades of 79.8 and 79.7, respectively. Those were the fourth- and fifth-best offensive grades for Arkansas offensive players this season, behind Raheim Sanders, Stromberg and quarterback KJ Jefferson.