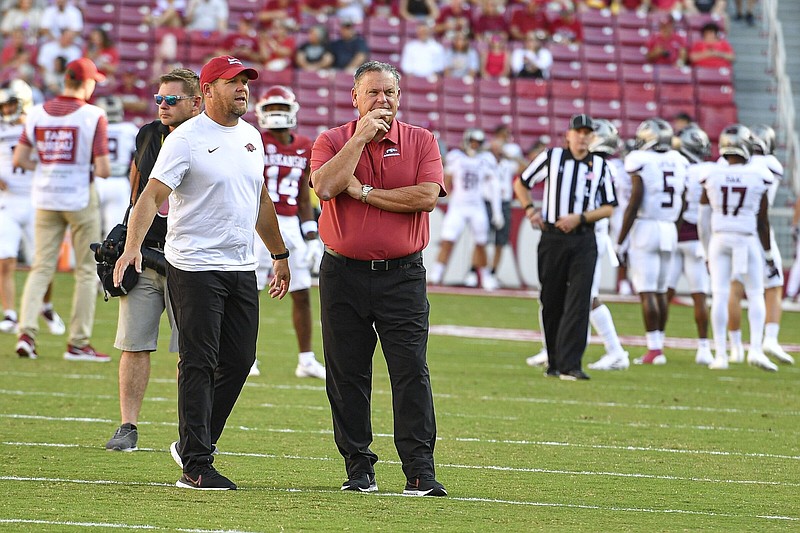 FAYETTEVILLE -- The opposing coaches for the upcoming Liberty Bowl between the University of Arkansas and Kansas took a few minutes on a Sunday evening teleconference to talk about the game before walking into the homes of recruits.

Arkansas Coach Sam Pittman said he was sitting in a car in Texas next to defensive coordinator Barry Odom, who had been considered a leading candidate for the vacant head coaching position at Tulsa by media outlets in Oklahoma, and Kansas Coach Lance Leipold was headed to the home of a recruit in Missouri.

Pittman, asked if he expected all of his coordinators to be available for the game on Dec. 28, replied "I do, yes," before adding that Odom was on the recruiting trip with him.

"Here's all I'm saying. I'm in Texas trying to walk into a home visit, and the ol' boy sitting next to me is named Barry Odom."

Multiple media reports surfaced on Sunday that Odom and Tulsa could not reach an agreement on terms.

"He had been the favorite this morning, now appears to be out," wrote Jonathan Huskey, a reporter for CBS affiliates in Tulsa and Oklahoma City of Odom on Twitter.

Pittman also said he expected a new strength and conditioning coach to be in place early this week to work with the players while the coaches continue to recruit leading up to the first bowl practice, scheduled for Friday.

"We'll have a formal announcement some time here early next week," Pittman said. "He will be working our team out over the next two weeks and we'll go from there. But we're looking good in that position and we'll be able to announce that position here shortly."

Former Razorback fullback Kiero Small, an assistant strength and conditioning coach at Michigan, is one of at least three who has interviewed for the position. Current Louisville head strength and conditioning coach Ben Sowders is also thought to be a candidate for the post. Sowders, a native of Bowling Green, Ky., spent the 2017-20 seasons on staff at Georgia, overlapping with Pittman, then the Bulldogs' offensive line coach, the first three of those years.

The Razorbacks (6-6) have been invited to a bowl game for a third straight season, allowing Pittman to join Lou Holtz, Ken Hatfield and Houston Nutt as the only coaches to start their Arkansas tenures with three consecutive bowl berths.

The Razorbacks will actually play in a bowl game in consecutive years for the first time since 2015-16 under Bret Bielema.

"We're so excited to play a team like Kansas University, who had such a wonderful year and turned their program around," Pittman said. "Coach Leipold is such a fine coach. The way they play, how hard they play.

"We're just excited to be bowl eligible for the third year in a row, and specifically the Liberty Bowl ... is a wonderful bowl."

Pittman said he felt good about the roster the Razorbacks will bring to Memphis for the game, particularly quarterback KJ Jefferson, who announced he would return for his senior season last week.

"Obviously, the opt-out of bowls has been something now that's been going on for quite a little while, and we'll certainly have our share of guys that do that as well," he said.

Leipold's Jayhawks (6-6) earned bowl eligibility in his second season at the helm, the program's first bowl bid since 2008.

The Jayhawks got off to a 5-0 start, earned a national ranking and drew the "College GameDay" crew to Lawrence, Kan., for the first time ever for an Oct. 8 game against TCU before injuries slowed their momentum.

Kansas lost standout quarterback Jalon Daniels to a shoulder injury during the 38-31 loss to the Horned Frogs, who went on to qualify for the College Football Playoff, and top tailback Daniel Hishaw was lost to injury the week before that.

"We got off to a fast start, the fastest start we've had here in a long time," Leipold said. "Really proud of the way we got off, especially two road wins where we fell behind and battled back to get road victories against two good opponents in West Virginia and Houston."

Daniels returned on Nov. 19 for a 55-14 home loss to Texas, then played in the season finale, a 47-27 loss at Kansas State, which beat TCU in the Big 12 Championship Game on Saturday.

After three consecutive losses to TCU, Oklahoma and Baylor, the Jayhawks crunched Oklahoma State 37-16 to gain bowl eligibility. That win over the No. 18 Cowboys broke Kansas' 44-game losing streak against ranked opponents that dated to 2010.

The Jayhawks finished the season with consecutive losses to Texas Tech, Texas and rival Kansas State.

However, they appear to be on the mend.

"I think as we prepare for this bowl game I think we'll be the healthiest we've been since probably that early October period," Leipold said. "We're excited to take on a quality opponent in the Arkansas Razorbacks."

Arkansas has squared off against Kansas just twice and it has been more than 100 years since the schools played. Kansas won both earlier meetings, 6-0 in 1905 in Fayetteville, and 37-5 the following year in Lawrence, Kan.

The Razorbacks have a 2-3 record at the Liberty Bowl, with tight losses to SEC opponents Tennessee, Auburn and Georgia prior to joining the SEC, then a 20-17 win in overtime against East Carolina after the 2009 season and a 45-23 rout of Kansas State in 2015.