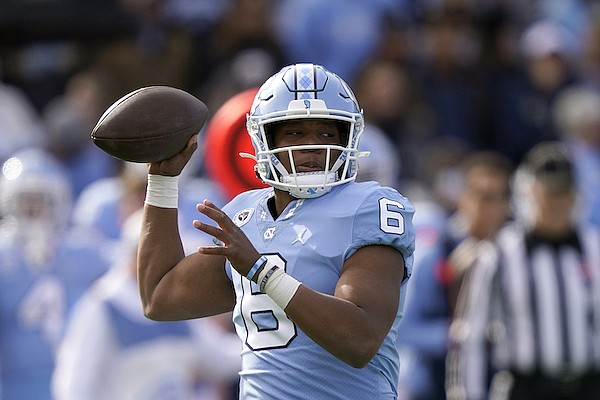 Former Morrilton High School and North Carolina quarterback Jacolby Criswell, who has entered the transfer portal, plans to make an official visit to Arkansas this weekend.

He said he plans to arrive in Fayetteville on Friday.

Criswell backed up Heisman Trophy candidate Drake Maye this season and appeared in three games. He completed 1 of 5 passes for 4 yards, and rushed 2 times for 20 yards.

He has three seasons of eligibility remaining because of the extra year provided by the NCAA to players who competed in 2020 at the height of the covid-19 pandemic.

Criswell signed with the Tar Heels in 2020 as a consensus 4-star prospect. He also had offers from Arkansas, Georgia, Miami, Ole Miss, Auburn, Oklahoma State and other schools.

He appeared in six games as a true freshman in 2020. He completed 3 of 4 passes for 16 yards and was intercepted once that year, and had 9 carries for 26 yards.

Criswell, who placed seventh at the Elite 11 Opening Finals in high school, had 5,925 passing yards and 58 touchdowns, and 2,568 rushing yards and 41 touchdowns in 3 seasons at Morrilton. He was named Arkansas Gatorade Player of the Year as a senior in 2019.

With quarterback Malik Hornsby announcing plans to enter the NCAA transfer portal, Criswell would give the Razorbacks a third scholarship with quarterback KJ Jefferson returning for the 2023 season. High school quarterback Malachi Singleton of North Cobb High School in Kennesaw, Ga., is committed to Arkansas in this year's high school senior class.