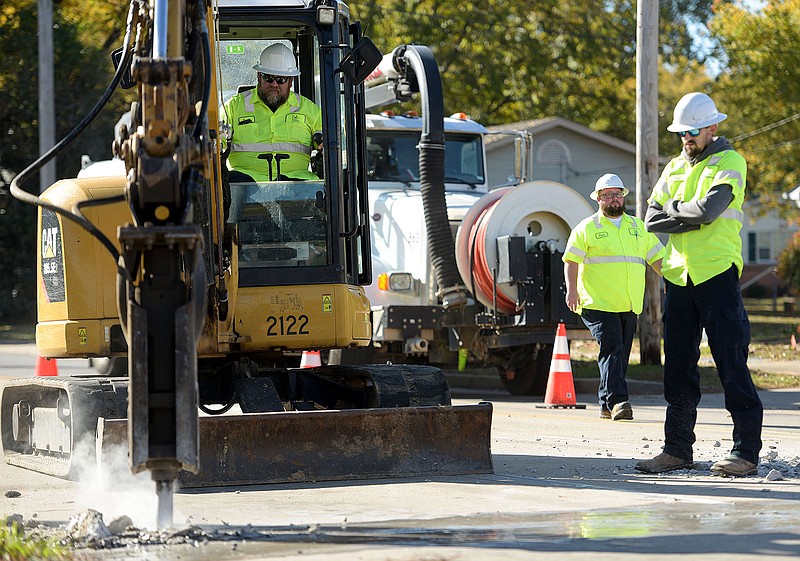 Scott Ballard (left) of the Fort Smith Utility Department operates a drill on Nov. 15, 2021, as fellow workers Jesse Hendricks (center) and Zach Chambers look on near the corner of Phoenix Avenue and South 24th Street in Fort Smith to begin the process of creating a new manhole for the sewer line. (File Photo/River Valley Democrat-Gazette/Hank Layton)

The city entered into the decree in January 2015 with the U.S. Department of Justice, the federal Environmental Protection Agency and the Arkansas Division of Environmental Quality. Fort Smith agreed to repair and upgrade its sewer system after decades of sewage runoff into local waterways, including the Arkansas River.

The city agreed to spend more than $200 million over the next 12 years to upgrade its sewer collection and treatment.

The original decree deadline was Jan. 2, 2027, but the city said it couldn't afford to do all of the work by that date. The city was granted a five-year extension to 2032.

Utility Director Lance McAvoy noted in a memo to City Administrator Carl Geffken the legal firm focuses on consent decrees and has been instrumental in handling matters with the U.S. Department of Justice and the Environmental Protection Agency.

McAvoy said during a directors meeting Thursday the city previously approved amendments to continue paying AquaLaw. He said the resolution would change the funding to how the city works with their regular legal service provider, Daily and Woods.

"We are saying for a one-year period, this will be the firm that represents the city as the subject matter experts and legal issues on the consent decree," McAvoy said.

"It is a team effort, and I would just like the board to go ahead and approve this so we can continue on," he said.

Ward 1 Director Jarred Rego asked how long the city has worked with AquaLaw, how much money it's spent and what McAvoy hopes to achieve in the next year by retaining AquaLaw.

He noted the city has lost every request it has made in recent years to extend the deadline again.

In November, the directors also unanimously approved spending $350,000 for engineering company Burns and McDonnell to continue providing services related to attempts to modify the agreement.

In a memo from McAvoy to Geffken, McAvoy said Burns and McDonnell provided financial consulting and technical assistance in support of the city's efforts to modify the decree since 2018. He said the firm has been instrumental in providing a second, independent analysis of challenges the city faces.

The $350,000 will increase the total payment for engineering services for the project to $1.15 million.

Jerry Canfield, city attorney, told directors during the meeting that the city has made several requests to modify the consent decree. He said once the EPA acts on the requests, the city can appeal to the U.S. District Court where the decree originated.