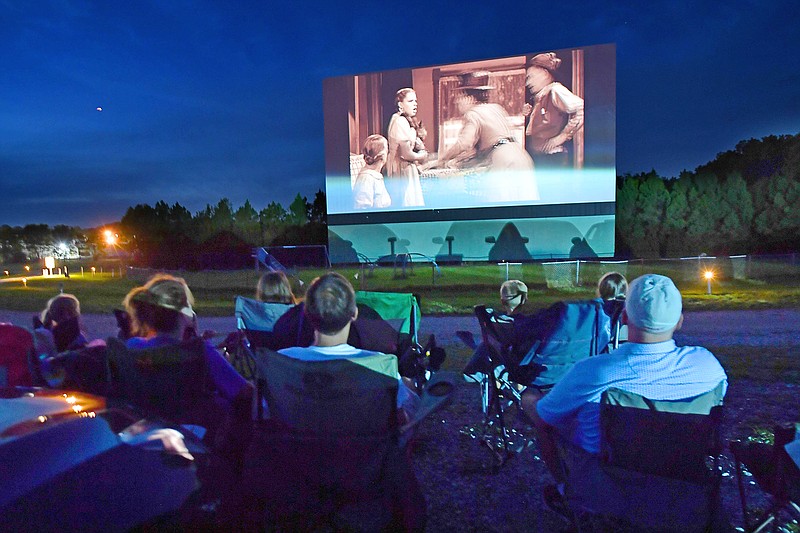 Patrons watch Friday, Aug. 19, 2022, during a showing of "The Wizard of Oz" and "Twister" at the 112 Drive-In in Fayetteville. The drive-in, one of the last few remaining in the state, is ceasing operation after 42 years at its location on Arkansas 112. The final weekend of showings will be Friday and Saturday nights, with "Grease" and "Footloose" scheduled. Visit nwaonline.com/220821Daily/ for today's photo gallery. .(NWA Democrat-Gazette/Andy Shupe)

It felt entirely right that Fayetteville's 112 Drive-In gave hundreds of fans a final weekend of big-screen, outdoor movie watching with a double-feature of nostalgic films.

Showing "Grease," a postcard from the late 1950s at Rydell High School, and "Footloose," a 1980s homage to teenagers' rebellious drive for expression, significance and pent-up dance skills, fit the mood perfectly. The last two nights of the drive-in theater's 42-year history reflected Northwest Arkansas' persistent march into the future. And it triggered, for many, a longing for the comfort of things past.

It was one of those sentimental goodbyes that mixed sadness with recognition that, even as the four-decade relationship ended, it was so good while it lasted.

That the 112 Drive-In had become one of only three remaining drive-in movie theaters in the state is a sign of the changing times. In Marshall and Mountain View, where the other two continue creating movie-going memories, the economics perhaps are not as cruel to the affections for a place and the experiences it inspired. Maybe it's amazing the theater in Fayetteville held on as long as it did in booming Northwest Arkansas, where most everyone knew land values would one day make it impossible for the theater's owners to reject a healthy return on their investment.

Room for 650 cars in 2022 Fayetteville means room for residential and commercial development.

A Little Rock developer has plans for the site. Interestingly, he's not oblivious to the affection for the movie-going experience. He's announced plans for duplexes and commercial space including an indoor movie theater along with an outdoor movie screen with 46 car stalls. Yes, it won't be the same experience, but it's an intriguing effort to pay respect to the land's history.

Like every movie shown on the big screen in west Fayetteville, the 112 Drive-In had its opening scenes and a story arc that featured thousands and thousands of Arkansans and visitors. Going to the movies there has been filled with a million little dramas, friendships, romances, spilled popcorn and scrapes and scratches on the monkey bars.

And the inevitable words appear at center screen.