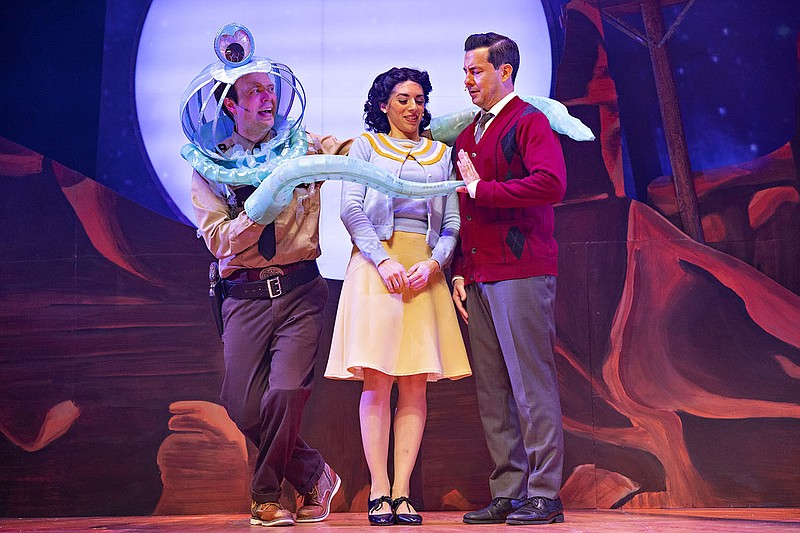 In the TheatreSquared production of “It Came From Outer Space,” Christopher Kale Jones (right) reprises the leading role he created at Chicago Shakespeare Theater — “a fun mess of a guy” named John Putnam who “is obsessed with saving the world whenever he can, but has gotten into trouble in the past for ‘crying wolf’ when it comes to earth-threatening danger.” (Courtesy Photo/T2)

It Came From Outer Space” — surprisingly now a musical but not surprisingly on the TheatreSquared stage — is described as “in the vein of ‘Little Shop of Horrors’” and “both an homage and parody” of the 1953 Universal International movie of the same name.

“You don’t need much familiarity with Universal’s first 3-D movie or its special effects to appreciate the 85-minute musical … from Joe Kinosian and Kellen Blair,” writes Catey Sullivan in the Chicago Sun-Times. “Inspired by [the] cult classic film — which was based on a story by Ray Bradbury, who also wrote an early version of the screenplay — ‘It Came From Outer Space’ the musical is sheer silliness.”

Bringing it to life and to the T2 stage has been a journey between worlds. “ICFOS,” as the actors and crew shorthand its title, was conceived because Kinosian and Blair met at the BMI Writers Workshop in New York City — “kind of like speed dating for musical theater writers,” they say.

“We saw the original 1953 film – complete with 3-D glasses! – at Film Forum, an old movie revival house in NYC,” the pair say in an email. “This was in 2016, right at the peak of presidential election contentiousness. At the time, we were looking for a project that would allow us to exercise our interest in irreverent humor but also had a message about the need for kindness. The movie, with its silliness and thoughtfulness alike, instantly inspired us as the perfect property to adapt.”

Like the film, the play opening this weekend at TheatreSquared “follows an alien invasion in the Area 51-ish desert town of Sand Rock. It falls to outsider John Putnam (Christopher Kale Jones) and local schoolteacher Ellen Fields [to be played at T2 by Gabriella Perez] to save the townsfolk from their own ignorance and the predators from afar.” It debuted at Chicago Shakespeare Theater with the intention that it would move on to Fayetteville.

“Chicago Shakespeare Theater reached out to us last fall with the idea of collaborating on the rollout of a new musical they were developing with the creators of ‘Murder for Two,’” Amy Herzberg, one of the founders of TheatreSquared, picks up the story. “We were hooked immediately.

“Joe Kinosian and Kellen Blair are comic geniuses with huge hearts,” she goes on. “And we simply could not pass up the chance to work with Chicago Shakespeare, one of the premiere theaters in the country — and, interestingly enough given their name, super-successful generators of new work — on a new piece that’s almost certain to go everywhere.

“But more than anything, this is just the right piece for the moment — theatrically inventive, funny, funny, funny, celebrating a great moment in American cinema and sci-fi, and touching us ever-so-lightly with a message we can never be reminded of enough.”

Herzberg spent the summer at Chicago Shakespeare, working as associate director on the play with director Laura Braza. Braza and four of the six Chicago actors came to T2 with the show.

“ New work is an absolute blast to create, and I won the lottery with my collaborators on this one,” Braza says. “We have a room full of smart, strange, talented people, so my job from early on really became sculpting. I would ask everyone to bring their best and worst ideas in, and then we’d throw it all up and see what worked and what didn’t.

“I knew early on that we wanted to triangulate three different worlds: the rough-and-ready ’50s cult sci-fi — where seeing the fishing line holding up a flying meteor is part of the fun; the Golden Age musical — our creators often call this ‘The Pajama Game with aliens’; and the unique wit of Kellen Blair and Joe Kinosian, who are the brilliant combination of silly and profound,” Braza muses. “I watched the movie and others like it, listened to classic musical soundtracks and spent a lot of time seriously considering questions like, ‘how many tentacles are too many tentacles?’

“This is by far the most ridiculous directing job I’ve ever had! I regularly gave notes like, ‘Great! This time, more like an octopus and less like a robot!’

“ We have two new cast members joining in on the fun, so a lot of my job has been helping them find their place in and take on this world,” Braza says of the transition to T2. “And of course, a new space comes with new challenges and opportunities. Mostly, though, my job is the same: try out a silly idea, then keep refining it until it works.”

Christopher Kale Jones reprises the leading role he created in Chicago — “a fun mess of a guy” named John Putnam.

“He is smart, has studied science, is an astronomer and an amateur astrologer,” Jones says of his character. “But he often comes off as condescending and a know-it-all. He is obsessed with saving the world whenever he can, but has gotten into trouble in the past for ‘crying wolf’ when it comes to earth-threatening danger.

“As an actor, it’s always fun to play a character who is full of themselves even when they are woefully wrong or unprepared. For a modern archetype, it’s kind of like Will Ferrell in ‘Anchorman,’ but instead of women entering the workplace, aliens are invading and no one believes John Putnam.”

“Of course, there are big production numbers, where a moment in the story is musicalized with singing and dancing. But most of the show is also underscored with instrumental music that supports the action on stage,” he says. “The underscoring can help steer the emotional landscape of the piece for the audience. In other words, you may not even be aware that the orchestra is playing under the dialogue, but they can help build tension, set up a joke, calm your nerves, etc. Joe has done an amazing job of crafting a score that really does function as both movie soundtrack and musical theater score.”

“Honestly, I first hope audiences have a good time,” Jones says of “ICFOS” at T2. “I know that’s a bit shallow, but I’m a huge proponent of escapist entertainment. If they get nothing deeper than a few belly laughs in the middle of their 9-5 work weeks, I’ll consider our job well done.

“That said, the show does also play on the themes of what we do when someone is different from us, which is a universal feeling, whether you felt it as the new kid in school or a club, or moving to a new city, or seeing people who don’t look like you for the first time. What do you do with that? With those feelings? Is common ground possible or are different people and things dangerous?

“This show, in a very humorous way, asks all these questions, and I think it’s up to the audience to answer them for themselves,” Jones concludes. “But I’d love to be a fly on the wall for that conversation!”

‘It Came From  Outer Space’