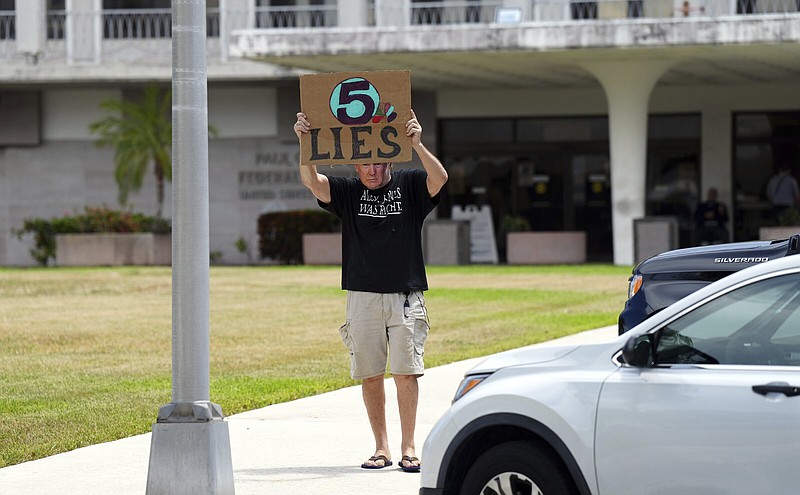 A Trump supporter wearing a Trump mask walks outside the Paul S. Rogers Federal Building and U.S. Courthouse in downtown West Palm Beach, Fla., before documents were released by The Justice Department explaining the justification for an FBI search of former President Donald Trump's Florida estate earlier this month, when agents removed top secret government records and other classified documents. The 32-page affidavit, even in its heavily redacted form, offers the most detailed description to date of the government records being stored at Trump's Mar-a-Lago property long after he left the White House and reveals the gravity of the government's concerns that the documents were there illegally. (AP Photo/Jim Rassol) (AP Photo/Jim Rassol)

WASHINGTON -- U.S. intelligence officials will conduct a review to assess the possible risks to national security from former President Donald Trump's handling of classified documents after the FBI retrieved boxes containing sensitive material from Mar-a-Lago, according to a letter to lawmakers.

In the letter, Avril Haines, the director of national intelligence, informed the top lawmakers on the House Intelligence and Oversight Committees that her office would lead an intelligence community assessment of the "potential risk to national security that would result from the disclosure" of documents Trump took with him to his private club and residence in Palm Beach, Fla.

In the letter, which was obtained by The New York Times, Haines said her office would work with the Justice Department to ensure that the assessment did not interfere with the department's criminal investigation concerning the documents. The review will determine what intelligence sources or systems could be identified from the documents and be compromised if they fell into the wrong hands.

Haines' letter, dated Friday, was reported earlier by Politico. It came after the leaders of the Intelligence and Oversight Committees asked her on Aug. 13 to conduct an "immediate review and damage assessment" in the wake of the FBI's search of Mar-a-Lago, during which federal agents recovered 11 sets of classified documents.

On Friday, the Justice Department released a redacted version of the affidavit used to obtain the search warrant for Mar-a-Lago. That document included the revelation that Trump had retained highly classified material after leaving office, including documents related to the use of "clandestine human sources" in intelligence gathering.

"The DOJ affidavit, partially unsealed yesterday, affirms our grave concern that among the documents stored at Mar-a-Lago were those that could endanger human sources," the lawmakers said in their statement.

Using the abbreviation for the intelligence community, they added, "It is critical that the IC move swiftly to assess and, if necessary, to mitigate the damage done -- a process that should proceed in parallel with DOJ's criminal investigation."

Before the FBI's search of Mar-a-Lago on Aug. 8, the National Archives and the Justice Department tried at length to retrieve sensitive documents that Trump had kept after leaving the White House.

In January, the archives collected 15 boxes from Mar-a-Lago. The FBI later reviewed their contents and found a total of 184 documents with classification markings, including 25 labeled "top secret," according to the affidavit released Friday.

Separately, a federal judge in Florida told the Justice Department on Saturday to provide her with more specific information about the classified records removed from Trump's estate and said it was her "preliminary intent" to appoint a special master in the case.

The two-page order from U.S. District Judge Aileen Cannon signals that she's inclined to grant a request from Trump's lawyers, who this week asked for the appointment of an independent special master to oversee the review the records taken from Mar-a-Lago and identify any that may be protected by executive privilege, and to ensure the return of any documents outside the scope of the search warrant.

The judge scheduled a Thursday hearing to discuss the matter further, suggesting the Justice Department will have a chance to raise objections to the judge's intentions. In other recent high-profile cases in which a special master has been appointed, the person has been a former judge.

Cannon also directed the Justice Department to file under seal with her more detailed descriptions of the material taken from Trump's estate "specifying all property seized." The former president's lawyers have complained that investigators did not disclose enough information to them about what specific documents were removed when agents executed a search warrant on Aug. 8 to look for classified documents.

The special master appointment, if it happens, is unlikely to significantly affect the direction of the Justice Department investigation, though it's possible an outside review of the documents could slow the probe down.

When the Justice Department proposed redactions to the affidavit underlying the warrant used to search Trump's residence, prosecutors made clear that they feared the former president and his allies might take any opportunity to intimidate witnesses or otherwise illegally obstruct their investigation.

"The government has well-founded concerns that steps may be taken to frustrate or otherwise interfere with this investigation if facts in the affidavit were prematurely disclosed," prosecutors said in the brief.

The 38-page affidavit, released Friday, asserted that there was "probable cause to believe that evidence of obstruction will be found at" Trump's Mar-a-Lago compound in Florida, indicating that prosecutors had evidence suggesting efforts to impede the recovery of government documents.

Since the release of the search warrant, which listed three criminal laws as the foundation of the investigation, one -- the Espionage Act -- has received the most attention. Discussion has largely focused on the spectacle of the FBI finding documents marked as highly classified and Trump's claims that he had declassified everything held at his residence.

But by some measures, the crime of obstruction is as, or even more, serious a threat to Trump or his close associates. The version investigators are using, known as Section 1519, is part of the Sarbanes-Oxley Act, a broad set of changes enacted in 2002 after financial scandals at companies such as Enron, Arthur Andersen and WorldCom.

To convict someone of obstruction, prosecutors need to prove two things: that a defendant knowingly concealed or destroyed documents, and that he did so to impede the official work of any federal agency or department. Section 1519's maximum penalty is 20 years in prison, which is twice as long as the penalty under the Espionage Act.

The timeline laid out in the redacted affidavit, which fills in several gaps in the public understanding, traces back to May 6, 2021. On that day, as The New York Times reported last week, the general counsel for the National Archives first reached out to Trump's designated representatives to the agency and asked for the return of about 12 boxes of missing documents.

But the effort was stonewalled for months. In January, the National Archives picked up what turned out to be 15 such boxes.

After discovering that mixed in were 184 documents marked as classified -- including what the affidavit described as extremely restricted ones containing information that could reveal confidential human intelligence sources and surveillance technology abilities -- the agency made a criminal referral to the Justice Department on Feb. 9.

In the spring, the FBI examined the boxes and opened an investigation into how the classified documents ended up at Mar-a-Lago, and whether any more were still stored insecurely there. The inquiry also sought to "identify any person(s) who may have removed or retained classified information without authorization and/or in an unauthorized space," the affidavit stated.

Now the National Archives and Justice Department were trying to retrieve the remaining government documents, meaning there were two potential official efforts that could have been obstructed.

The affidavit is heavily redacted in its discussion of that period. But the Times has reported that the FBI obtained a grand jury subpoena in May for any remaining files.

Also unsealed with the affidavit Friday was an angry letter to the Justice Department from one of Trump's lawyers, Evan Corcoran, sent that month. The substance of his letter was entirely focused on the question of classified information and did not address obstruction.

In June, Jay Bratt, head of the Justice Department's counterintelligence section, visited Mar-a-Lago to inspect a storage room and spoke with Trump's lawyers about the documents problem.

At least one of Trump's lawyers is said to have signed a written statement asserting that to the best of their understanding, they had turned over the remaining classified material from the White House boxes, satisfying the subpoena. But investigators came to believe that even more records remained at Mar-a-Lago.

The details in the affidavit are redacted, but it disclosed that multiple witnesses have been cooperating with the FBI. In a separate filing, the department urged a judge not to disclose anything that might reveal their identities, lest they be harassed and intimidated.

Investigators have also sought information by other means. After Bratt and other officials visited Mar-a-Lago, prosecutors subpoenaed the Trump Organization for a copy of Mar-a-Lago's surveillance tapes. The company complied, turning over the tapes to the government. The Justice Department has subsequently asked for more tapes.

The Justice Department decided to obtain a search warrant to go into Mar-a-Lago and seize any remaining government documents. But in doing so, officials made an important legal and strategic decision.

Even though the department thought of itself as "conducting a criminal investigation concerning the improper removal and storage of classified information in unauthorized spaces, as well as the unlawful concealment or removal of government records," as the affidavit stated, officials effectively sidestepped the issue of whether the documents were classified.

Instead, as a basis for the search warrant, they cited three criminal laws for which prosecutors do not need to prove that a mishandled document was classified. The harshest was the obstruction statute.

The search was successful in finding and retrieving numerous remaining government documents, some of which were marked as highly classified, according to the FBI's inventory. The raid thus apparently brought an end to long-impeded official efforts by two agencies to retrieve the records -- some containing sensitive national security information, some not.

If the Justice Department is considering charging Trump with obstruction, there is one missing piece of information in the public understanding of the events: whether there is proof that he personally knew the documents were at Mar-a-Lago and chose not to return them all, including after the subpoena.

News accounts attributed to people familiar with the matter have said he did know he had the documents and discussed whether he ought to return them with various advisers, including at one point declaring, "They're mine." But because the affidavit is redacted, it is not clear what court-admissible evidence investigators have gathered in this area.

Information for this article was contributed by Luke Broadwater and Charlie Savage of The New York Times and by Eric Tucker of The Associated Press.