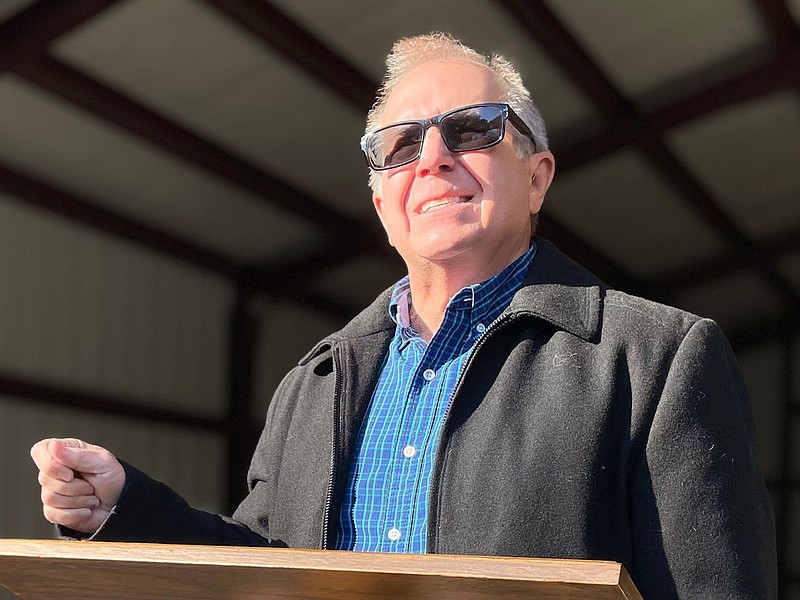 Bishop Gary Mueller of the Arkansas Conference of the United Methodist Church speaks in Conway in this Nov. 6, 2021, file photo. (Arkansas Democrat-Gazette/Frank Lockwood)

Arkansas Bishop Gary Mueller rejected Central United Methodist Church's attempt to enter a discernment process "regarding possible disaffiliation," telling the Fayetteville congregation in a letter Friday its "vague" initial resolution was flawed and "will not be further considered."

In an interview, Mueller said a new resolution containing "more detailed language" could resolve the problem, adding, "It's purely a technical adjustment."

The decision complicates efforts by some traditionalist members to break away from the nation's second-largest Protestant denomination and raises questions about the validity of other disaffiliation efforts.

Central is the state's largest United Methodist congregation. The second-largest, First United Methodist Church in Jonesboro, had already voted July 31 to disaffiliate "for reasons of conscience around issues of human sexuality."

Asked how his determination would affect First United Methodist Church in Jonesboro, Mueller said, "I'm not sure yet what that means. We're quite frankly checking that out, and so I have nothing I can share on that right now."

It requires a two-thirds vote of those members present for a congregation to approve disaffiliation.

In order to complete the process, churches must reach an agreement with the Conference Board of Trustees. The decision also would need to be ratified at the next session of the Arkansas Annual Conference. A special session is scheduled for November.

Central's church council had voted 18-6 on Aug. 10 to begin the official discernment process "for reasons of conscience regarding human sexuality," citing a provision in the Book of Discipline that was added at the denomination's 2019 Special Session of the General Conference in St. Louis.

Known as Section 2553, the rule gives local churches "a limited right" to disaffiliate from the denomination "for reasons of conscience regarding a change in the requirements and provisions of the Book of Discipline related to the practice of homosexuality or the ordination or marriage of self-avowed practicing homosexuals as resolved and adopted by the 2019 General Conference, or the actions or inactions of its annual conference related to these issues which follow."

The Aug. 10 resolution aimed to trigger the three-month-long discernment process that must precede any disaffiliation votes.

However, its "vague" language did not reflect the wording approved in 2019, Mueller and Chancellor Michelle Ator wrote in the letter.

A reworded resolution, they suggested, might fix the problem.

"If it wishes to do so, the Church Council has the option of considering a new motion that conforms to the requirements of [Section] 2553," Mueller and Ator wrote.

The two officials examined the issue after two Central members, Bill Kincaid and Brenda Gullett, questioned the adequacy of the resolution.

"To our knowledge, this is the first time this particular concern has been raised in the Arkansas Conference," they noted.

At the St. Louis meeting in 2019, a majority of the delegates supported the church's existing teaching that the "practice of homosexuality" is "incompatible with Christian teaching" and that "self-avowed, practicing homosexuals" are not supposed to be certified, ordained or appointed to serve in the church.

But they also provided an exit ramp for congregations that disagreed with the vote or with related action (or inaction) by regional bodies, known as annual conferences.

Based on the wording in the Aug. 10 resolution, it was not possible to determine whether Central's request was based on one of these "limited requirements," Mueller and Ator wrote.

Members of United for Central, a Fayetteville organization opposed to disaffiliation, say supporters of existing Methodist teachings on human sexuality, residing in annual conferences that uphold those teachings, have no grounds for disaffiliating as a matter of church law.

In an email Monday, Central's pastor, Carness Vaughan, informed his congregation of the latest development.

"The motion utilized on August 10 by Central's Church Council was almost identical to motions utilized at many churches across the Conference that have previously sought to enter the Discernment Process for possible disaffiliation. While we are unclear of the impact that the Bishop's action may have on other churches, we do know that this goes beyond our local congregation," he wrote.

"We are seeking additional clarification from Bishop Mueller and the Arkansas Conference legal team regarding several additional legal points raised by the two Central members that extend beyond the adoption of a revised motion that we believe need to be addressed before asking our Church Council to meet for additional consideration of this matter," Vaughan wrote, noting that a listening session on disaffiliation, originally scheduled for Aug. 28, would be postponed.

"We believe it is vital that our church leadership have some of these lingering questions answered before further consideration of how Central may proceed. In the meantime, we have suspended our process to seek the clarity we need and will update you as soon as we are able to do so," he wrote.