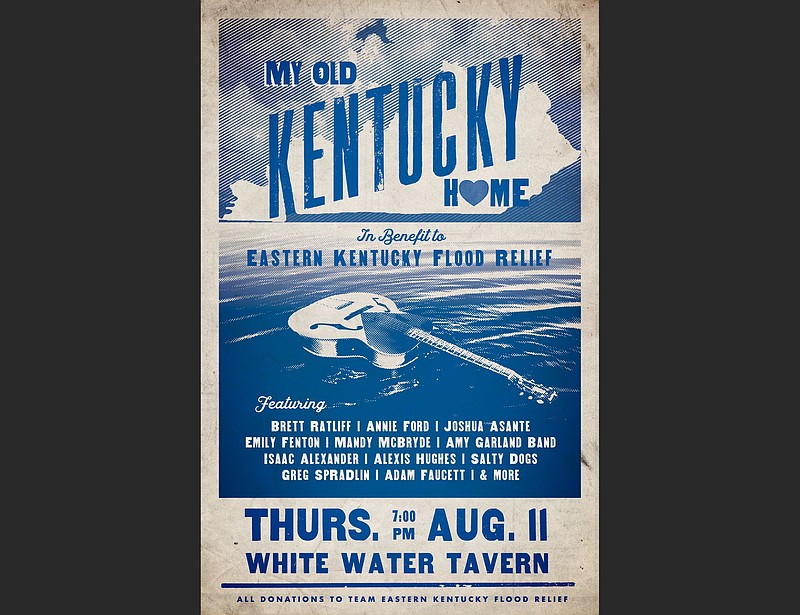 (Special to the Democrat-Gazette/Isaac Alexander)

Music might not be able to fix all the world's troubles, but dadgummit it sure can help. To that end, a bevy of musicians from Arkansas and beyond perform tonight at White Water Tavern in Little Rock to raise money for the people of eastern Kentucky affected by deadly flooding last month.

Matt White of White Water Tavern began contacting artists after the late July flooding, which left at least 37 dead and "hundreds unaccounted for," according to Gov. Andy Beshear.

"I think we all want to try to lend a small helping hand where we can, or at least try to let folks know we love them and are thinking of them," White says in an email. "So I sent out a bunch of texts to many generous Arkansas-based musicians, and within a day we had a superb lineup ready to go, along with a really beautiful poster designed by Isaac Alexander."

White says organizers are "leaning toward" donating all funds to Team Eastern Kentucky Flood Relief, the fund established by Beshear.

For those who can't make it to the show, donations can be made at @ekymutualaid. Also, tinyurl.com/4rt5f2vz is a good resource for donation information.

The music of Kentucky and Appalachia will be front and center during the show, with performers playing songs by Kentucky artists or about the area, White says.

"So much incredible music has come from the region; there is a lot to choose from. I'm hoping Greg Spradlin will sing some Tom T. Hall. Maybe some Everly Brothers from Isaac Alexander. I imagine the Salty Dogs will do their red hot version of 'Nine Pound Hammer.' Perhaps some Loretta Lynn from Emily Fenton or Mandy McBryde. There is no telling what Joshua Asante, that other-worldly purveyor of astral soul, may pull off."

Amy Garland Angel will reach into the Kentucky songbook with her band — bassist Mike Nelson, guitarist Nick Devlin and drummer Bart Angel. They will be joined by Brad Williams of the Salty Dogs on mandolin.

"We're doing 'My Old Kentucky Home' and one of my old favorites, Bill Monroe's 'Blue Moon of Kentucky,'" Garland Angel says. In addition, she and husband Bart, along with her Wildflower Revue band mate McBryde, will perform the Everly Brothers' "Kentucky."

Playing at a benefit like this is a way for musicians to use their artistry to help those in need, she says.

"Music is such a healing thing ... It's a gift we've been given to play music, and you need to use your gifts for good. As Arkansans we're no strangers to big floods. I lost a home in Stone County to a flood. But when you see entire communities impacted by something like this, it's a whole other ballgame ... our hearts are with the folks in eastern Kentucky and we want to let them know we're thinking about them."

Ratliff, who has played White Water several times, lived in Little Rock a few years back with his wife, Rebecca Gayle Howell, who was poetry editor for the Oxford American. They now live in Fayetteville. His third and most recent release is "Whitesburg, Ky.," a 13-song collection of traditional Appalachian folk alongside his own compositions.

In a recent social media post about the fundraiser, he writes: "Needless to say, my heart breaks for home. I grew up there and I've spent all of my career as an artist and organizer serving this region that gave life to me. A service I will continue even though I'm no longer physically there. So many of my teachers, band mates, friends, community members and people that I've loved and lived with along the way have lost everything. I wish I could hold them and be with them, but [today] we will reach out in spirit and song."