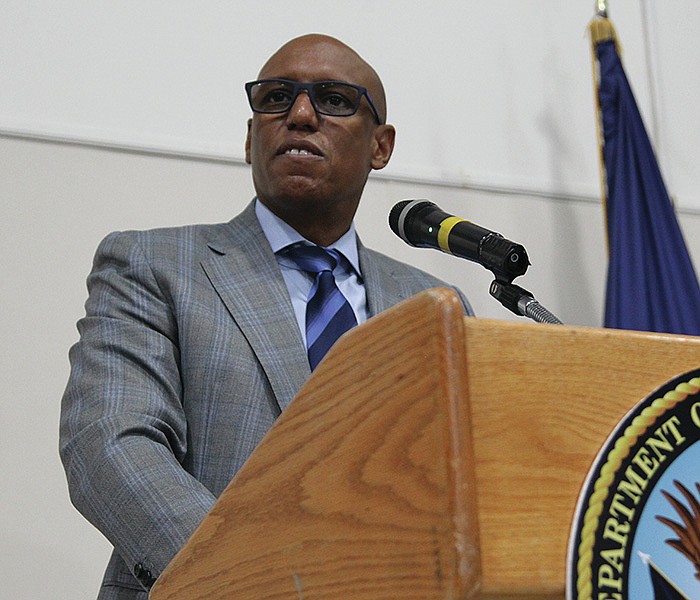 Donald Remy, deputy secretary of the U.S. Department of Veterans Affairs, speaks during a news conference at the John L. McClellan Memorial Veterans Hospital in North Little Rock on Tuesday. Remy addressed treatments and initiatives offered by the facility and spoke on federal efforts to improve access to healthcare for veterans. (Arkansas Democrat-Gazette/Will Langhorne)

Arkansas veterans can expect a slate of benefits ranging from treatments for illnesses caused by burn pits to improved mental health care access thanks to new federal initiatives, the deputy secretary of the U.S. Department of Veterans Affairs said on Tuesday.

Donald Remy addressed the federal efforts to improve healthcare quality and access for veterans following a tour of VA facilities in the Little Rock area.

President Joe Biden is expected to sign the bill into law today, according to Remy.

"It was terrific to be able to share this very historic moment with our team as we think about how we're going to operationalize that law and how were going to make sure that those vets who are in need of care, those vets who have earned those benefits can have access to them as promptly as possible," said Remy while speaking at the Eugene J. Towbin Healthcare Center.

More than 2,900 Arkansas veterans and service members have documented their exposure to airborne hazards including burn pit smoke by completing a questionnaire offered by the Airborne Hazards and Open Burn Pit Registry. Since the federal VA began accepting submissions in 2014, more than 289,000 veterans and service members have completed the questionnaire, according to a release from the department.

As employers across the U.S. grapple with staffing shortages, Remy said federal officials were working to increase wages and promote the mission of the department to attract and retain VA staff.

"I like to say the most important thing that we can do is to have people understand that our mission is like no other and that is a selling point in and of itself," he said. "When we want to recruit people to come and work at VA, one of the things that I think they understand and appreciate is that mission and how we're here to serve our veterans."

In March, President Joe Biden included veterans in a four-pronged policy package. The "unity agenda," which also addresses mental health services, cancer research and the opioid epidemic, provides $119 billion to improve the quality of health care offered by the Department of Veterans Affairs. The agenda also invests $2.7 billion in sustainable housing for veterans and includes stipends for family caregivers of eligible veterans, investments in oncology research and funding for national cemeteries, according to a news release from the federal administration.

Arkansas veterans can expect to see improvements in mental health care as part of the federal policy, said Remy. Funding for a national suicide prevention hotline for all Americans includes a dial option specifically for veterans.

"If you dial the number and press one, you get right into the veteran's crisis line where you can get an immediate response to your mental health challenges," he said.

Remy touted the efforts of federal VA hospitals, including the North Little Rock facility, to expand care by providing telehealth and home visitation options for veterans.

"We joked today about house calls – I learned today we do house calls here – some people might think house calls are a thing of the past but not here not in Arkansas because we recognize we need to meet every veteran where they are," he said.

At the time Central Arkansas Veterans Healthcare System began offering blue light cystoscopy in April, it was the only medical facility in the state to offer the treatment, according to a news release from the hospital.

The hospital has four full-time pain-certified specialists and will add two positions more this year, according to Scott.

"It's an area of high need for our veteran population but it's important to work with each veteran individually," she said.

Before touring the North Little Rock facility, Remy spoke at the annual conference of the Enlisted Association of the National Guard of the U.S. in Little Rock.