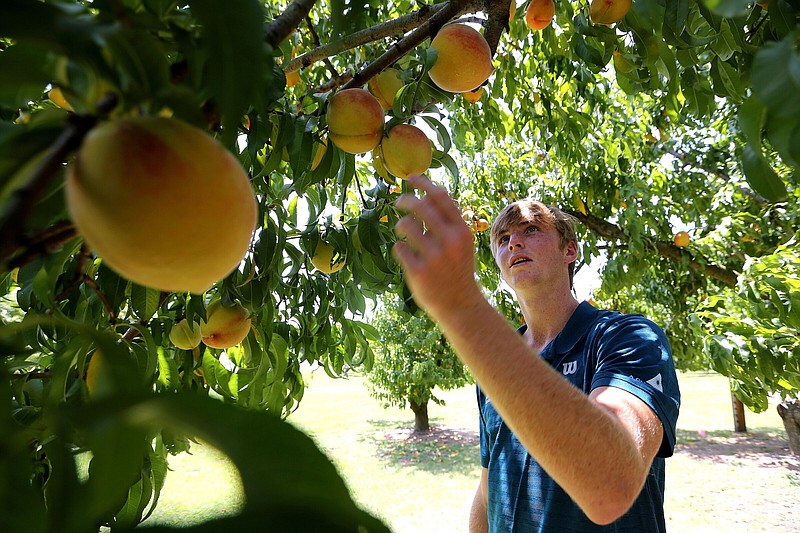 Peach and watermelon growers in Arkansas are reporting delayed harvests and a drop in crop quality because of unusual summer weather.

First it was drought and now it's heavy rainfall.

July was the third hottest recorded since 1895, according to the USDA's weekly weather and crop bulletin posted Tuesday. According to preliminary data provided by the National Centers for Environmental Information, the contiguous U.S. experienced its 3rd-hottest and 55th-driest July since 1895.

Much of northwest and central Arkansas remain in severe drought, with pockets of extreme drought in the northwest and southwest corners of the state, according to the U.S. Drought Monitor, as of Aug. 4.

The Delta region is still largely in moderate drought.

Amanda McWhirt, University of Arkansas System Division of Agriculture horticulture crop specialist, said specialty crop growers this year have experienced delays in planting and are harvesting late because of abnormally dry conditions in June and July.

"In certain places, I've definitely heard that their season was delayed by several weeks, where they are just now starting to pick peaches and I think a lot of that has to do with it just being really dry," McWhirt said.

"I think a lot of that has to do with, basically the crop is maturing at a slower rate because it is still water-stressed even with irrigation."

Though a majority of Arkansas specialty growers use drip irrigation systems -- a boon during times of drought -- crops like peaches require a lot of water for the fruit to develop and ripen, McWhirt said.

"It's been dry and growers are supplementing with water, but it's hard to keep up with the amount of water that a plant needs, in part because it's been so hot," McWhirt said.

"Most of our specialty crops sell by weight; they are a really high percentage of water, so anytime we are water-limited, that impacts fruit size and of course, we sell most things by weight, so there will be probably be some reduction in yield."

In times of extreme heat, pollinators are also less active, which could result in smaller fruit, McWhirt said.

Peaches are normally harvested from late June to early July in Arkansas, but this year, McWhirt expects the peach harvest will continue through this month.

Recent rains aren't really helping watermelon crops either as the harvest season for watermelons is already winding down; picking is typically in July, McWhirt said.

It remains to be seen how the summer drought will affect grape crops this year, McWhirt added.

Over the last two weeks, Johnson County received only a half an inch to an inch of rain, particularly along the Interstate 40 corridor, Jones said.

Morgan said his farm saw almost three inches of rain on July 29; a blessing after weeks with no precipitation.

"But we have not gotten a rain since, we're bone dry now," Morgan said. "We're still begging for it here."

Some of Morgan's peaches -- Red Haven peaches particularly -- didn't get the amount of rain needed, which has affected the size and yield.

"We try to help out with the peach festival, but we've also got our business," Morgan said. "It's great when there's Johnson County peaches at the peach festival. This year, the timing was not great, we couldn't have near as many down there just because of the heat, that was really right in the middle of those hundred degree days, we just didn't have very many peaches ripe enough."

Triple digit weather during the day and temperatures above 75 degrees Fahrenheit at night this summer delayed ripening, particularly early in the season.

Morgan's normal picking season runs from the last week of June to mid-August, but picking didn't start this year until after July 4.

"We've still got two or three weeks of peaches left, we've got some that aren't even ripe yet, so it's just moved our season back a lot," Morgan said.

Recent rains have helped Arkansas farmers catch up, but rainfall has been sporadic and has varied county by county.

In some areas, farmers are getting too much rainfall.

Over the last two weeks, Sharp County received between 4 to 6 inches of rain. Average precipitation for those weeks is between one to 1.75 inches of rain.

Over the last 30 days, Sharp county reported 5 to 6 inches of rain when it normally gets about 3 inches in that time .

"They've picked up double what you would normally expect," Jones said. "That area where there's above normal precipitation stretches all the way from Sharp County all the way east to Jonesboro, the northeast part of the state where there's a lot of farmland."

Brian Carter, who grows watermelons on 10 acres, said his crops did well during the drought because of his drip irrigation system. Carter's farm is in Sharp County, one of the counties worst hit by severe drought earlier this summer in Arkansas.

The rain destroyed a portion of his crop.

"We lost the last three acres completely," he said. "It's been pretty tough."

"The drought didn't bother me too bad, we got a good irrigation system, so I was able to keep water on everything," Carter said.