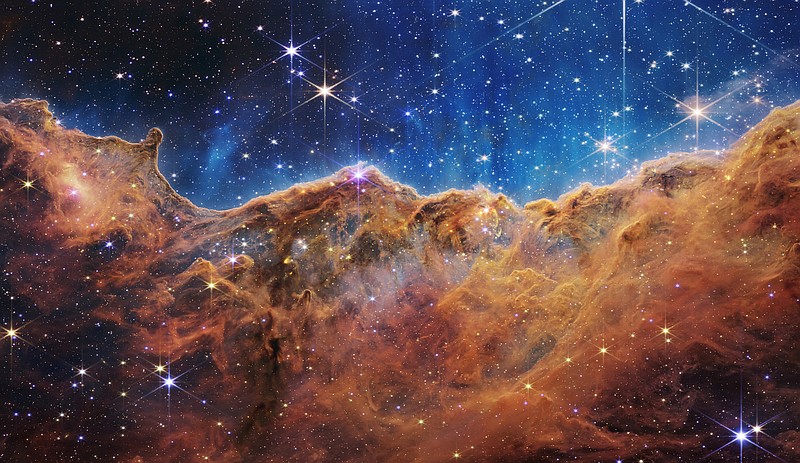 This landscape of "mountains" and "valleys" speckled with glittering stars is actually the edge of a nearby, young, star-forming region called NGC 3324 in the Carina Nebula. Captured in infrared light by NASA’s new James Webb Space Telescope, this image reveals for the first time previously invisible areas of star birth. (NASA, ESA, CSA, and STScI/TNS)

Following a 30-year effort involving 20,000 people around the globe at a cost of $10 billion, the James Webb Space Telescope is now at work imaging the cosmos. The payoff in understanding our universe will dwarf the costs. The payoff in scientific literacy--public understanding of science--will be perhaps its greatest benefit. Democracy can thrive only when its citizens are scientifically literate.

Webb has five times the light-gathering power of its predecessor, the Hubble Space Telescope. The light gathered by Webb will be more scientifically significant because it will be mostly longer-wavelength infrared radiation. Webb will gather light from great distances, from events occurring billions of years ago. Because the expansion of the universe has stretched this radiation, a telescope that detects infrared is more useful.

Webb's location is mind-boggling. It executes a small orbit around a balance point arising from the gravity of the sun and Earth, a point 1 million kilometers beyond the moon's orbit. This balance point is called "L2." Here, the combined effects gravity and "centrifugal forces" (like the effects one feels when riding in a car executing a tight turn) will maintain a relatively stable orbit.

Webb is so distant that NASA cannot repair or re-fuel it. The plan was that Webb would have 10 active years before running out of the rocket fuel required for periodic course corrections. But launch and positioning during the past six months have been so successful that far less rocket fuel was consumed than had been expected, extending Webb's useful life to perhaps 20 years.

During those years, Webb will reap volumes about the birth and development of the earliest galaxies (these are large clumps of stars, similar to our own Milky Way galaxy), the births and deaths of stars and how this relates to galaxy formation, how stars form planetary systems, and the nature of the many planets that we know orbit other stars.

Teams of scientists, 286 different groups, have been allotted telescope time for just the first year of operation. A few of these projects are already underway. One of them, headed by Misty Bentz of Georgia State University, employs a unique type of detection: The telescope stares at an object for several hours and records a "spectrum" (a record of the precise wavelengths) of the light coming from each location on the object. She is using this detector to study a single distant galaxy, dubbed "the Eye of Sauron." As in nearly all galaxies, a giant black hole lies at the galaxy's center. This particular giant black hole casts an eerie glow which brightens occasionally as gas is sucked into its maw, hence the galaxy's title. The special detector allows Bentz to study changes in the swirling gas and dust as it is sucked down into the maw of the black hole in order to discover, perhaps, the secret of the Eye.

Another project involves the possibility of extraterrestrial life. A certain "exoplanet" (a planet orbiting another star beyond our sun) called WASP-96b orbits close to a star in the Milky Way that lies 1,150 "light-years" from Earth. A light-year is the distance light travels in a year. Since light travels a distance equal to seven times around earth in one second, a light year is enormous by human standards. Nevertheless, 1,150 light years is relatively close to our sun in galactic terms.

WASP-96b happens to make regular orbital passes directly in front of its star (as seen from Earth). This means that a small fraction of the light from its star passes through WASP-96b's atmosphere. After passing through that atmosphere, this starlight bears the "signature" of the chemicals in the planet's atmosphere. This is because those chemicals absorb particular wavelengths of the star's light, so these wavelengths are "missing" from the light that arrives at the telescope. The theoretical predictions, prior to Webb, were that this planet's atmosphere should contain carbon monoxide, carbon dioxide, and methane, but the Hubble telescope had been unable to detect them. Webb's first look at this light has already detected water vapor that indicates the presence of clouds and haze, but scientists expect Webb to provide much more data in the future.

Using such detection methods, we're going to learn about the possibility of life on other planets. In my opinion, many of these planets will harbor life, but few if any will have the advanced plants and animals found on Earth. We'll see.

Stay tuned. Webb is going to astonish all of us for years to come.