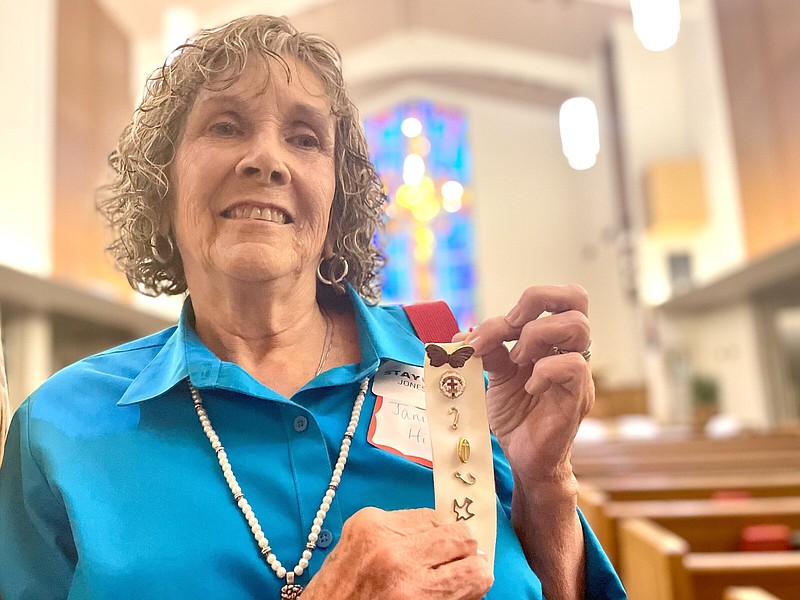 As Methodist ministers, Janis Anderson Hill’s grandparents and father dedicated their lives to spreading the gospel. Before voting against disaffiliation at Jonesboro First United Methodist Church Sunday, she rounded up some of their old faith-based lapel pins, plus a Sunday School badge she had earned many decades ago. More photos at arkansasonline.com/86methodist/ (Arkansas Democrat-Gazette/Frank E. Lockwood)

With their congregation voting to break away, hundreds of denominational loyalists who attend Jonesboro First United Methodist Church are weighing whether to side with the majority or find a new house of worship.

While 69.26% of the professing members in the audience -- 944 -- were in favor of severing ties, another 412 wanted to stay United Methodist.

Now, some of them fear, they are spiritually homeless, at least on Sunday mornings.

The majority plan to keep the property when they leave the denomination.

John Hall, an Arkansas State University professor who was baptized at the church in 1960 and confirmed in 1972, brought his membership card with him Sunday when he cast his vote.

It's a half-century old.

His wife, Cathy, is the granddaughter of the late Russell H. Patton, Sr., Jonesboro's original Ford Motor Company franchisee, and a First Methodist board chairman for 14 years, she said.

For the Halls, the building is full of memories.

"He and I got married there. Our were kids were baptized there," Cathy Hall said.

"Our parents funerals [were] there," John Hall added.

As kids, the Halls were both acolytes. As young adults, she taught Sunday School; he served on the day care board.

These days, ''We're not people who attend a lot, but we support [the church] financially," he said, noting that, for decades, his bank had automatically routed part of his paycheck to the congregation.

As of Monday, there won't be any more monthly drafts, he said.

The decision to disaffiliate will be especially painful for the members of his family who are weekly attenders, he said.

"We felt like we'd lost our church," he said.

"In my wildest dreams, I would never have thought something like this would happen to this church," he said. "I don't think we're going to go back."

HEADED FOR THE DOORS

Steve and Janis Anderson Hill, both longtime Methodists, voted against disaffiliation Sunday evening, then somberly headed for the doors.

"We've been members of this church for years," he said. "My grandmother has a Sunday School class named after her. I have two great grandfathers that are Methodist ministers. We're tried and true Methodists, and we don't believe in what they're doing."

Janis Hill, who also comes from a line of Methodist preachers, was carrying a small strip of fabric with tiny lapel pins attached. One fishhook -- symbolizing "Fishers of Men" -- had been her father's; the other her grandfather's. Both were ministers. The retirement pin and the descending dove had belonged to her father's mother, the Rev. Ella Anderson.

"My grandmother used to wear this dove all the time," she said.

Each of the emblems evoked memories of loved ones.

"I needed them here with me in this vote," she said, her voice catching, just a moment, as she spoke.

She voted to stick with the United Methodist Church because "God is for all. Everyone. That's the bottom line," she said.

Older members of the Jonesboro church can remember the church split of 1980, when the pastor and a few hundred members left to form a separate, independent congregation.

The breakaway congregation was free to leave, but couldn't take the real estate with them.

Normally, that's how it is.

Historically, local congregations have held their property in trust for the national and worldwide denomination.

But a change to the United Methodist Book of Discipline, adopted in 2019, allows individual congregations to "disaffiliate" because of disagreements over human sexuality.

The provision, Paragraph 2553, sunsets Dec. 31, 2023. Once it expires, exiting with property could become impossible, some traditionalists fear.

It takes a supermajority -- two-thirds of the members present at the meeting -- for a congregation to authorize disaffiliation. It's a winner-takes-all proposition, however.

The losing faction has no claim to the property or financial resources.

While the Halls and the Hills were on the losing side, they haven't been forgotten.

"The group that did not prevail last night, those are United Methodists. We are already in contact. We will be working with them to find how they live out their identities as United Methodists in a new landscape," said Bishop Gary Mueller of the Arkansas Conference.

When a congregation divides, suffering is often a result, he said, noting that his observations were "from a distance" and anecdotal.

"Those leaving and those remaining both experience deep wounds. Relationships are often broken. It impacts families and friendships. At times, the pain is so deep that it takes them a long period of time to get back on firm footing," he said.

"It's not just groups going in a different direction. It's often kind of a tearing apart," he said.

Elvis Coble, an 89-year-old retired choral director, was hoping that the status quo would continue.

"I've been a United Methodist for so long and I like everything that goes with it," he said. "I love the openness, I love the use of the Bible as the word of God, and I love to assemble with other people who are like that and feel the Spirit," he said Sunday.

Others, including Shawn M. Floyd, said that the issue was fidelity to Scripture and its teachings.

"Every word that I've read in the Bible is true," he said. "In order to go against the word of God and try to flip it or change it to please man ... I don't agree with that myself."

"God saved me. I was lost in addiction a long time ago, and I'm coming up on three years clean and sober because of Jesus Christ," he said. "It completely changed my life."

Sunday's vote is a significant step, but not the final step, in the disaffiliation process. The church will need to complete a standard disaffiliation agreement with the Arkansas Conference's board of trustees.

The agreement must also be ratified by a majority during a special session of the Arkansas Annual Conference, scheduled for either Nov. 21 or March 13.

Opponents haven't ruled out challenging the disaffiliation vote in the meantime.

Wednesday on their Facebook page, members of Stay UMC Jonesboro said: "We are evaluating our options and will post updates as more information becomes available."

The congregation welcomes all and isn't going anywhere, its pastor, Jonathan Griesse, said.

"We plan to stay a United Methodist church," he said.

No matter what lies ahead, "This will still be a place, a safe place, for people to be able to worship and rest and heal and sit at Jesus' feet," he said.

While 412 members voted against disaffiliation, it's unclear how many of them feel strongly enough about the issue to cancel their membership.

Pastor John Miles hopes that many of them will ultimately remain part of the Jonesboro First family.

"The people on the 'stay' side are still people I care about and friends, and many of them are faithful members of the church," he said.

Nonetheless, he predicted the congregation would be healthier in the future if it disaffiliates.

"Our denomination is sick and we've got to confront the illness and it's painful; the treatment is painful," he said.

Sunday's resolution cited "issues of human sexuality," as the proximate cause of the split, the boilerplate language required, under UMC church law, to trigger the disaffiliation process.

But the differences go far beyond that, Mueller acknowledged at a May 15 listening session in Jonesboro.

"It's almost like the issue of human sexuality is a metaphor that we keep getting drawn back to, but it has a number of other issues in it," he said.

The church's Book of Discipline, which contains not only the denomination's law but its doctrines, states that "the practice of homosexuality is incompatible with Christian teaching."

It also prohibits the ordination of "self-avowed practicing homosexuals."

It's a mandate some bishops have chosen to ignore.

"I think there are substantive issues around interpretation of Scripture, about an understanding of the orthodox faith, and quite frankly, and I say this very sadly, that there has not been a willingness to enforce the Book of Discipline," Mueller told the listening session audience.

In Arkansas there are disagreements over human sexuality, but the doctrinal differences are less pronounced.

"We have a number of folks who are orthodox in terms of the virgin birth and the resurrection of Christ, the physical resurrection and those things. They happen to have a different stance on human sexuality," Mueller said. "Now you go other places, that's not the case. It's a whole other kind of theology." 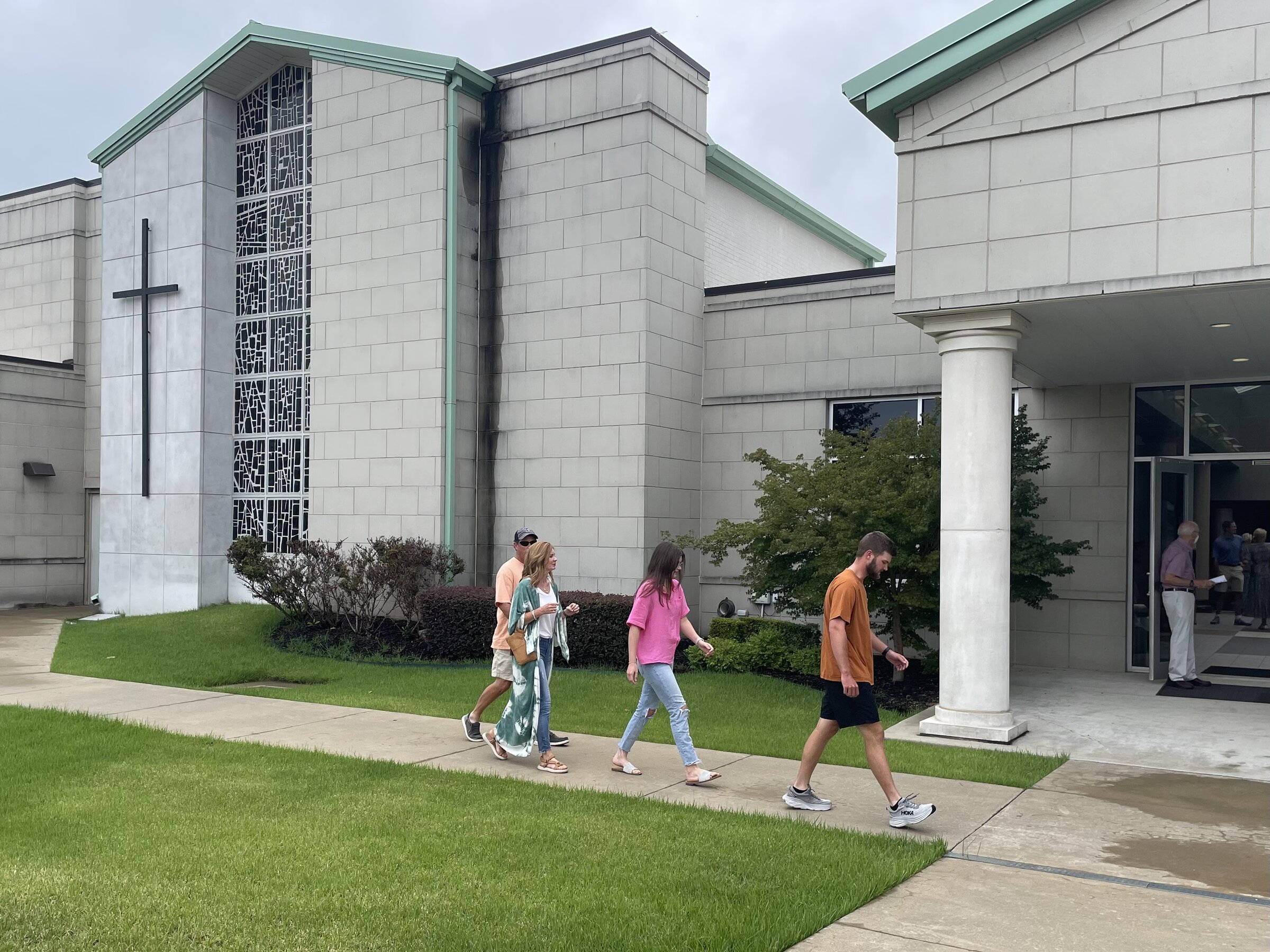 These people came more than a half hour early for a disaffiliation vote Sunday, at First United Methodist Church in Jonesboro. By the time they arrived, the congregation’s corridors were already packed with people. (Arkansas Democrat-Gazette/Frank E. Lockwood) 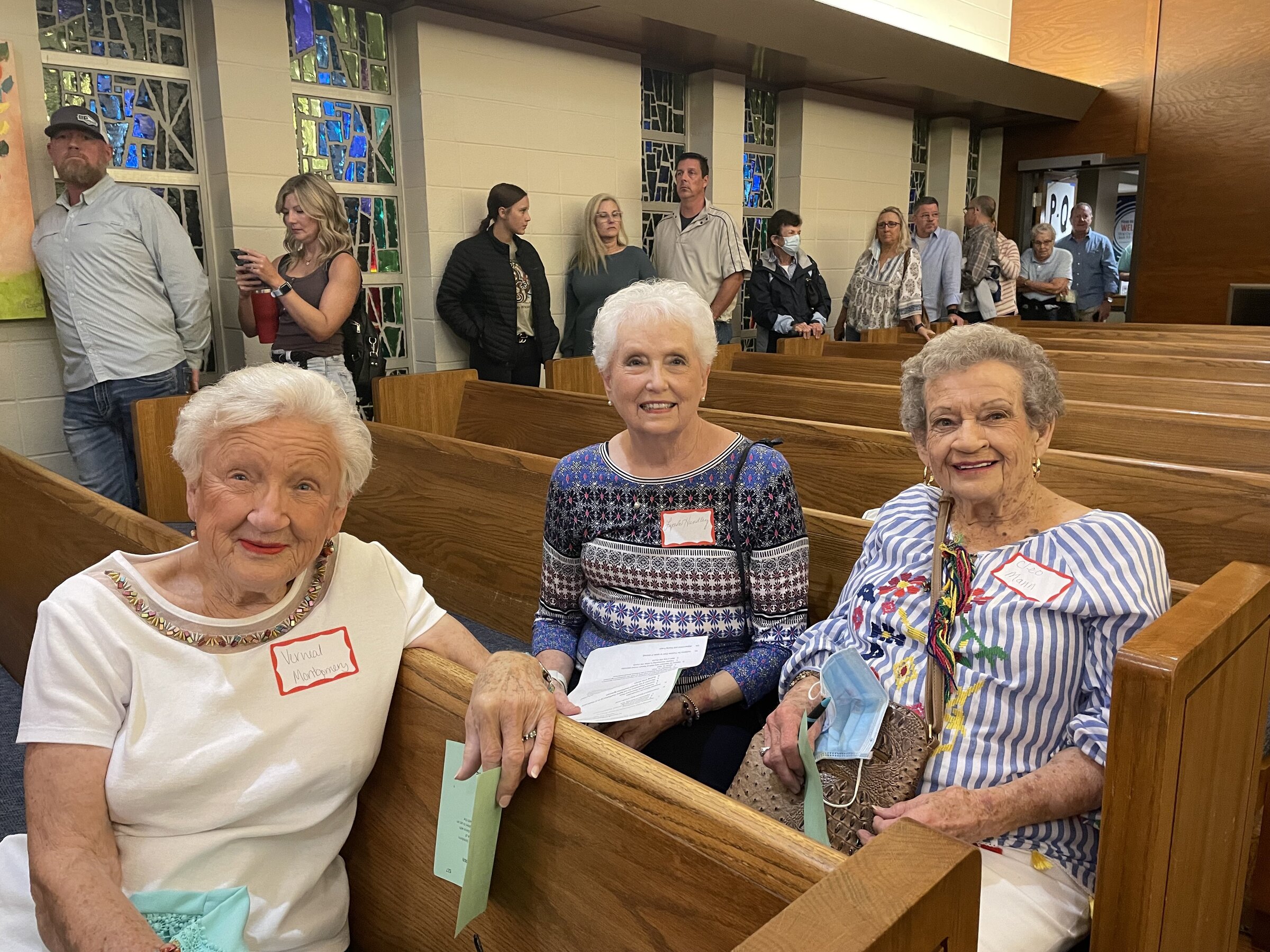 At Jonesboro First United Methodist Church Sunday, (left-to-right) Verneal Montgomery, Lynda Hundley and Cleo Mann picked up their ballots more than an hour early so that they could vote on a resolution to disaffiliate from the national denomination. Behind them are some of the other 1,356 professing members who participated in the plebiscite. (Arkansas Democrat-Gazette/Frank E. Lockwood) 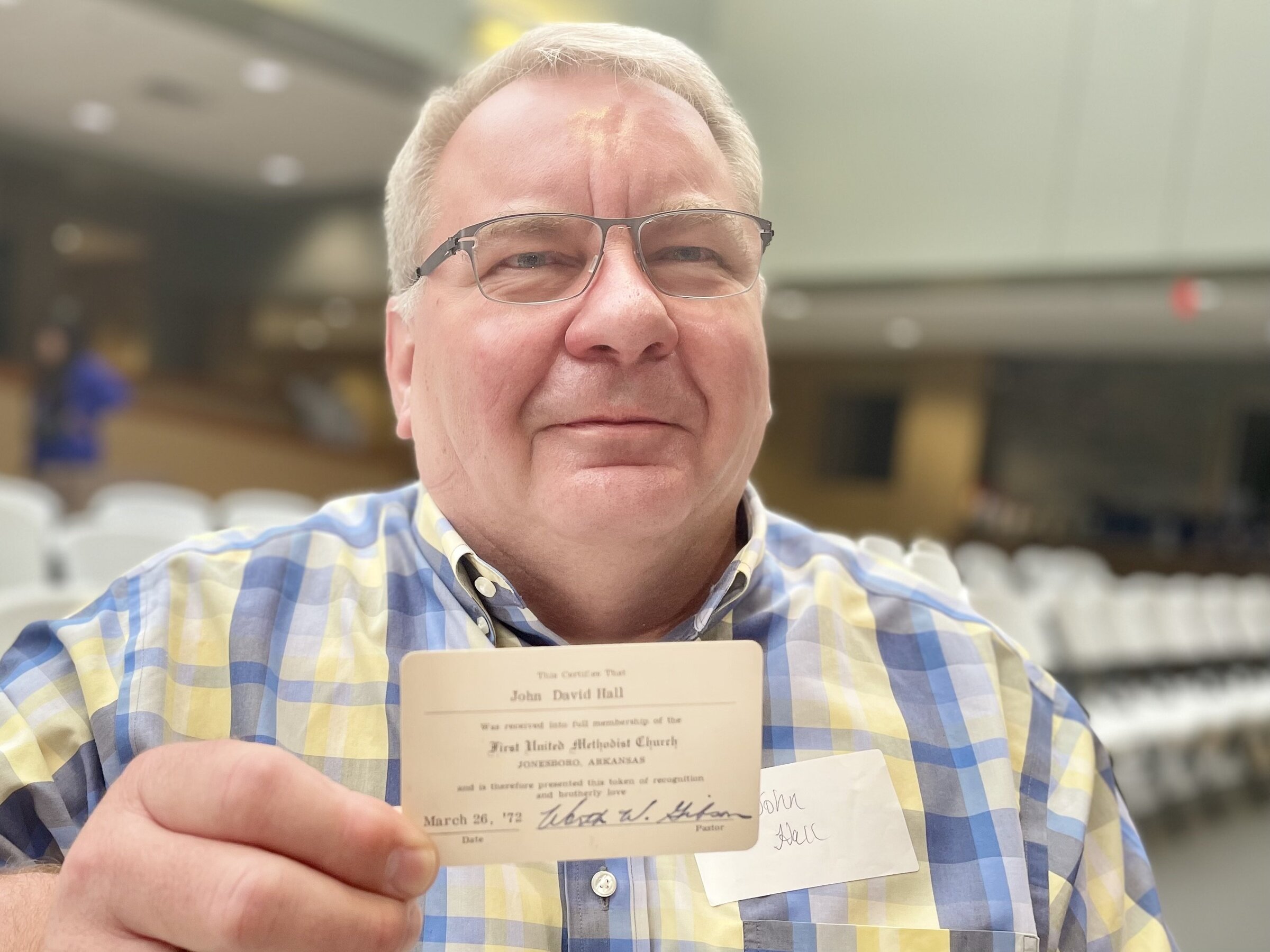 John David Hall, an Arkansas State University professor who was baptized as an infant at First Methodist Church in Jonesboro, holds up the membership card he was given in 1972. After Sunday’s disaffiliation vote, “We felt like we’d lost our church,” he said. (Arkansas Democrat-Gazette/Frank E. Lockwood)