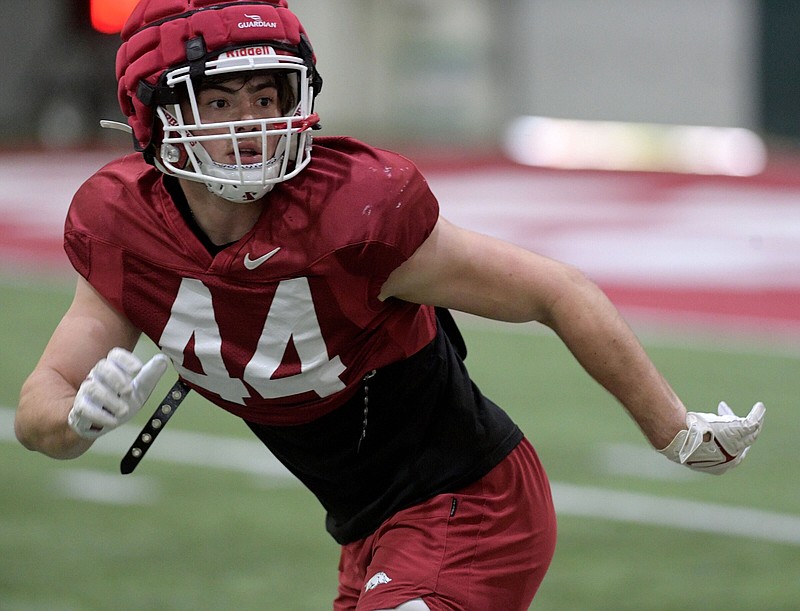 FAYETTEVILLE -- Kaden Henley was sitting in his physics class at Shiloh Christian High School on March 10, 2021, when he got a surprise text from Saints Coach Jeff Conaway.

"I wasn't expecting my head coach to call me out of class," Henley said. "He asked me to come to his office.

"My first thought was, 'I hope I didn't do anything wrong.' "

As it turned out Henley had done enough things right playing linebacker for Shiloh Christian to earn a scholarship offer from the University of Arkansas.

When Henley got to Conaway's office, his father, Saints linebackers coach Ashley Henley, also was waiting.

"I was beyond excited," said Kaden Henley, who committed later that day. "Arkansas was No. 1 on my board. I was just waiting for them to offer."

"His whole recruiting process was kind of a short window," Ashley Henley said. "He got his first offer, I'm going to guess, three or four weeks before that Arkansas offer and it kind of blew up where he was getting an offer almost every day.

"But Arkansas had talked to him before anybody else, and the conversations we'd had at home were as father-son more than coach-linebacker.

"Arkansas would call and they'd have a great conversation, and he'd say, 'Dad, I just wish they would offer me.' I said, 'Just be patient and if it's meant to be, it'll happen. Just feel good that they're reaching out and building a relationship and getting to know you. And if that day comes, you'll have a good idea of where it's coming from and what they're about.'

"So when Arkansas offered him, from a dad standpoint, it was really cool for me to get to sit in on that conversation and see the reaction from Kaden when he got in Coach Conaway's office."

Henley was an early enrollee at Arkansas and participated in four bowl practices in December, then went through offseason workouts and spring practice, where he worked at middle linebacker.

"Kaden's a guy that works extremely hard," Razorbacks senior linebacker Bumper Pool said. "You can tell he's got a nose for the ball. He's got a very good football IQ.

"Getting in the weight room for him was huge. He's going to be a great player for us in the future."

Henley, 6-2 and 225 pounds, said working with strength and conditioning coach Jamil Walker and his staff helped him increase his maximum squat from 450 to 515 pounds and his bench press from 300 to 345.

"Coach Walker and his staff do an incredible job," Henley said. "They're not easy, but they help you. You get stronger."

Henley was a four-year starter in high school who had 469 career tackles and seven interceptions.

"I've played a lot of football," he said. "I've started over 50 games. That helps a lot, because the best way to get better is to play."

As a freshman, Henley started the final 10 games for Lawton (Okla.), where his father was the defensive coordinator.

Henley made 109 tackles for a team that made the Class 6A playoffs and finished 6-5.

"Kaden kind of got thrown into the fire as a freshman there, but he was our best option to be honest with you," Ashley Henley said. "He was physically big enough to handle it, and growing up around football, he just naturally had a good feel for how to play.

"Obviously it helped him grow up a lot as a young kid playing at that level, and he was productive and for a ninth-grader he did a really, really good job."

When Ashley Henley became Shiloh Christian's linebackers coach in 2019, he was his son's position coach.

"I always tell people it depends on how I'm doing at practice that day," Kaden Henley said when asked what it was like to be coached by his father. "But I enjoyed being around my dad and being coached by him. It was cool for me."

Ashley Henley said he's looking forward to watching his son play for the Razorbacks, rather than being his coach.

"Now I get to just be dad," Henley said. "I can sit back and watch the Arkansas coaches coach him and enjoy it.

"Probably the hardest thing for him is that as his coach, I made him work extra hard, because I didn't want anybody to be able to say, 'Well, that's the coach's kid.'

"I'm just so proud of him and he was such a pleasure to coach. I'm fortunate to be his dad."

"He has a natural feel for the football and where it's going and was able to quickly diagnose the play," Ashley Henley said. "He was able to see linemen pull that tip off what play is coming and react."

Henley played on all of the special teams at Shiloh Christian and blocked four punts combined the previous two seasons, so that might be an opportunity for him to get on the field this season.

"I love to play on special teams," Henley said. "Any way that I can contribute and make the team better, I'm all ears."

"I got a better understanding of the defense and just my overall job and what's expected of me," he said. "The little things that click and give you a little bit of an advantage of, 'OK, the ball is going here.'

"The first day in pads, it was juicy. Everyone was getting after it.

Kaden Henley at a glance