Simmons’ May given award for leadership 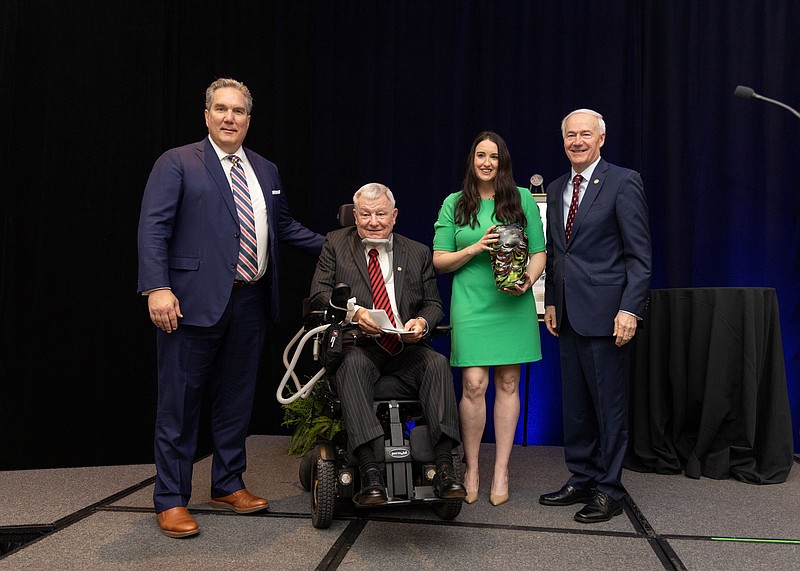 The LIFE Award honors those who promote success in the free market. Economics Arkansas honored May for his contributions to the Arkansas banking industry as former chief executive officer and chairman of Simmons First National Corp., according to a news release.

In a tribute video to May, George Makris Jr., Simmons Bank chief executive officer, remarked that "Tommy was instrumental in expanding Simmons' footprint in Arkansas" and credited May's leadership and opportunism for expansion into the St. Louis, Springfield, Wichita, and Kansas City markets.

Pine Bluff Mayor Shirley Washington referred to May as family.

"What he's taught me as a leader is that no matter what, your goal is to always make a difference. And that's what he does; he's intentional," Washington said.

The LIFE Award was presented to May by Gov. Asa Hutchinson, Economics Arkansas Board Chair Randy Lawson, and Executive Director Kathleen Lawson.

Hutchinson recalled some of his own early business endeavors, from mowing lawns in junior high to establishing an FM radio station in Northwest Arkansas.

He acknowledged the "American story is about the pursuit of success...the belief that hard work should be rewarded. It's the America that's based on the free enterprise system."

The vision of Economics Arkansas is for all Arkansas students to master an understanding of economics and personal finance and apply that knowledge for success in the free enterprise system. The nonprofit provides teachers statewide with the tools and confidence to integrate economics into their classrooms, according to a news release.

In his acceptance, May emphasized the vital role teachers play in shaping future generations. He remarked that "a teacher's influence is never done" and that economic education is "truly an investment in the lives of our children." May has championed economic education and financial literacy during his tenure at Simmons Bank.

Students from Baker Elementary School in the Pulaski County Special School District demonstrated their knowledge of economics by reciting some of their favorite classroom activities and books. They were joined by their teacher Jamie Garmon, Economics Arkansas Master Economics Teacher, who thanked the organization's supporters for ensuring teachers receive the training, resources, and encouragement to prioritize economics in the classroom.

The Arkansas Bankers Association (ABA) was also recognized for its 60 years of partnership with the organization. The ABA has been a champion of economic and personal finance education since Economics Arkansas was formed in 1962. The annual ABA Chairman's Campaign has raised more than $2.1 million toward resource development and teacher training since it began.

ABA Chairman-Elect Randy Scott accepted the award and noted how amazed he was by what the young children are learning. He even offered a job to each of the four Baker students who presented earlier in the event.

Economics Arkansas is a private, nonprofit, non-partisan educational organization founded in 1962 by Arch Ford and led by Bessie B. Moore to promote economic literacy in Arkansas. Its mission is to equip PreK-12 schools with standards-based resources and professional development to teach economics, personal finance, and the free-enterprise system using practical, innovative, and inspiring methods so that Arkansas students may master an understanding of economics and personal finance and apply that knowledge for success in the free-enterprise system, according to the release.

Print Headline: Simmons’ May given award for leadership