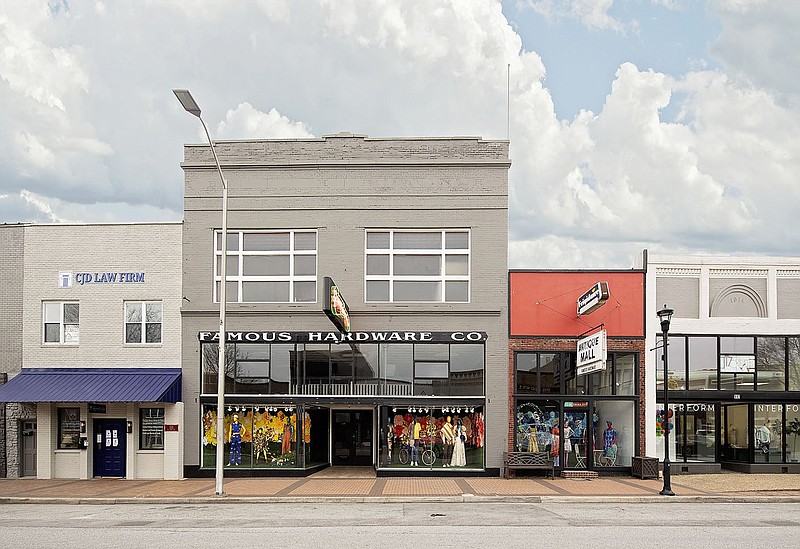 Stop and peek into the window displays of the Famous Hardware building in downtown Springdale, and you’ll find that they are filled with several of the outfits created by the designers of Fashion Week. The exhibition remains open through mid-May at 113 W. Emma Ave. (Courtesy photo)

If you missed this year's NWA Fashion Week events, you can still get a little taste by simply walking down Emma Avenue in Springdale.

Stop and peek into the window displays of the Famous Hardware building, and you'll find that they are filled with several of the outfits created by the designers of Fashion Week, thanks to a partnership between the Tyson Family Foundation and Olivia Walton, who sponsored the Future of Fashion Patron Circle Lounge at the Momentary during the recent runway events.

"She wanted us to utilize the windows to have an extension or continuation of Fashion Week after it was over," says Zack Ridenoure, programming manager for INTERFORM who managed the goings-on backstage at Fashion Week.

The window displays feature mannequins wearing the unique looks created by INTERFORM designers, and the whole thing continues the floral themes that ran through the entire Fashion Week marketing. Vinyl labels are on the windows to designate the designers and explain INTERFORM in English, Spanish and Marshallese.

"The idea was to create a garden party setting, with grass on the floor and floral in the background," Ridenoure says. "We wanted to emphasize and lean into spring at a time when, as a community, we're coming out of lockdown ... to go from cold and dark months to something bright and open."

Ridenoure says this way Fashion Week organizers were able to give the designers a continued showcase for their hard work. Roughly 1,200 people attended one or more of the three nights of runway events, but with traffic picking up for downtown Springdale activities and restaurants, they suspect this exhibit will help get many more eyes on the newly crafted clothes.

"I have not (displayed work like this), it's the first opportunity of its kind, [and] it's pretty cool," says Bryce Arroyos, a recent University of Arkansas graduate of the apparel program who made his debut at Fashion Week. He also participated in an active exhibition at the Momentary a couple weeks beforehand. His process is to make clothing entirely from recycled, reused materials.

Arroyos has four looks on display at Famous Hardware, a total of eight pieces. If you've seen his work before, you'll probably recognize them right away, he says, because they have his signature patchwork and color blocking.

He chose a scrap corset, a scrap mini-skirt dress and scrap set because those looks have been his best work until now, Arroyos says. He included the scrap poncho and imitation chaps to show off his cowboy persona.

"Lastly I picked a lil kay, my repurposed towel set because it's summertime, and I'd imagined that the colors would work well in the display," he says.

Arroyos spent roughly three months preparing all of his Fashion Week pieces, and Ridenoure says the INTERFORM sewing classes spent about 2.5 months on theirs.

"When you're designing and making garments, something wearable, there's a lot of time that can go into it," Ridenoure says. They sat down to work multiple days a week during that stretch in the community sewing classes. "It's a relatively short time, but they worked really hard and spent extended hours creating everything they could so they would be on the runway."

If they could accomplish so much in a short timeframe, Ridenoure says he's excited to see what they could do with more time.

Ridenoure hopes that the bright, colorful displays will bring passersby joy and show them that fashion and design in Northwest Arkansas is not being sourced out completely by a big corporation or fashion brand.

"We have a sense of style here in Northwest Arkansas, and it's great to see," he says. "As somebody who was born and raised here, and left because of that (lack of) presence -- to find it for myself, come back and see how much (fashion and design) has grown and is really here now is important."