District to go to 4-day school week in fall 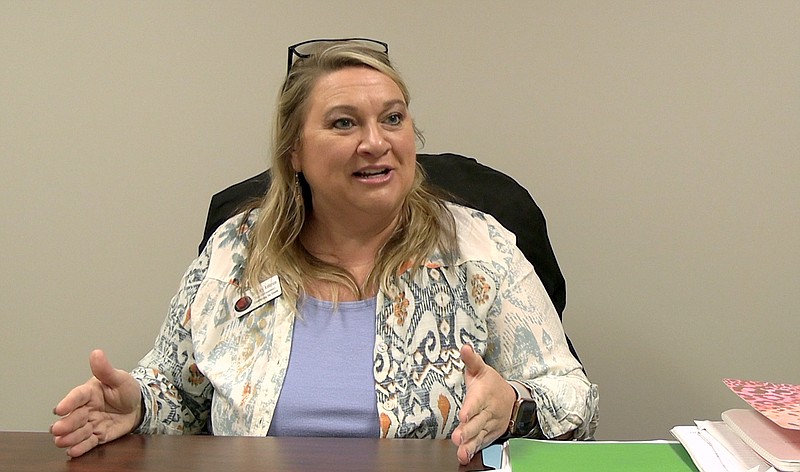 Cutter Morning Star School Superintendent Nancy Anderson talks about the district’s decision this week to move to a four-day school week starting this fall, while in her office on Friday. - Photo by Andrew Mobley of The Sentinel-Record

HOT SPRINGS -- The Cutter-Morning Star School District will switch to a four-day school week this fall after the School Board approved the move during Wednesday night's monthly board meeting.

Classes will be held on Tuesday through Friday, while students will be out of school on Monday. Cutter-Morning Star is the first, and currently only, of the seven public school districts in Garland County to adopt the change.

The school board began discussions on the consideration of four-day week in February, hosting a series of town-hall-style meetings, after recent changes by the Arkansas Legislature had allowed for greater flexibility in public school calendars.

"We vetted this for about three months," said Cutter-Morning Star Superintendent Nancy Anderson on Friday. "We sent out surveys, and we really wanted parent input. We're here for the kids -- we want to do whatever we can to help the kids. We do not want to make it hard on the parents. We're partners with them, and we believe that this is a good model, because it'll help keep them in school."

Anderson said the vast majority of people have been in favor of the switch, with 96% of staff in support, and around 85% of parents in support of the benefits it will provide. The main goal of the district, she said, is to increase overall attendance at school.

She noted close to 30 schools in the state have now gone to a four-day week, and that while it may seem counterintuitive, research indicates students who have a day off to catch up on homework or attend a scheduled doctor's appointment are more likely to make the other four days. She also referenced, regarding the decision to take off Monday as opposed to Friday, the fact that most doctor, dental and orthodontists offices close on Fridays.

"Same kind of thing for our teachers," she said. "Sometimes they have things that they need to do, and so we are hoping -- our goal is -- we will have higher student attendance and we will have a higher teacher attendance, because they will have more time."

For the teachers, she said, this will be a huge benefit for them and allow them to be much better prepared for their classes.

While the schedule may look different, students will still receive the same amount of instruction, and instructional time, as they would in the traditional, five-day week. The student will not miss anything, she noted, but the day will simply be a little longer.

The district is not yet able to speculate on what the potential start time or end time of the school day will be. Right now, Anderson said, they are looking at guidelines and program opportunities to be able to offer students dinner and extra snack meals during the extended school day, along with meals for Monday to send home with the students on Friday.

Another program the district is working on currently is the opportunity for child care on Mondays for those students whose parents work.

"We understand that we have parents that have to work," she said. "You know, most all of our parents work one or two jobs. So we are in the process of writing a grant that we will join with a nonprofit and provide opportunities on Mondays for those kids."

Anderson said in order to finish writing the grant and to send it off as quickly as possible, she needs each parent to contact the school immediately to let them know if they will need anyone to watch their child on Mondays due to work requirements.

Families are asked to contact Cutter-Morning Star director of curriculum instruction, Terry Lawler at [email protected] or (501) 463-7844 regarding a need for child care on Mondays, as well as for any other questions about the switch to a four-day school week.

She said sports and extracurricular activities will not be scheduled for Mondays, though they could still sometimes occur on a limited basis.

"Again, we don't want to lose any kids, but I personally think this is a good thing, and I personally believe a lot more schools will be going to this in the next five years. I think it'll become a standard," she said.