Russians say give up or die, hear no reply 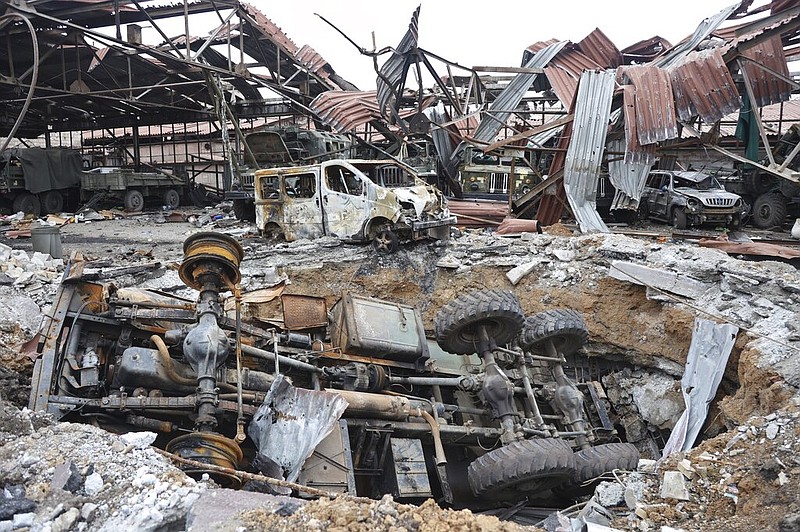 KYIV, Ukraine -- Ukrainian fighters who were holed up in a steel plant in the last known pocket of resistance inside the shattered city of Mariupol ignored a surrender-or-die ultimatum from Russia on Sunday and held out against the capture of the strategically vital port.

The fall of Mariupol, the site of a merciless 7-week-old siege that has reduced much of the city to a smoking ruin, would be Moscow's biggest victory of the war and free up troops to take part in a potentially climactic battle for control of Ukraine's industrial east.

Capturing the southern city would also allow Russia to fully secure a land corridor to the Crimean Peninsula, which it seized from Ukraine in 2014, and deprive Ukraine of a major port and its prized industrial assets.

As its missiles and rockets slammed into other parts of the country, Russia estimated that 2,500 Ukrainian troops and about 400 foreign mercenaries were dug in at the Azovstal steel mill, which covers more than 4 square miles and is laced with tunnels.

Many Mariupol civilians, including children, are also sheltering at the Azovstal plant, Mikhail Vershinin, head of the city's patrol police, told Mariupol television on Sunday. He said they are hiding from Russian shelling, and from any occupying Russian soldiers.

Moscow had given the defenders a midday deadline to surrender and "keep their lives," but the Ukrainians rejected it, as they've done with previous ultimatums.

"We will fight absolutely to the end, to the win, in this war," Ukrainian Prime Minister Denys Shmyhal vowed on ABC's "This Week." He said Ukraine is prepared to end the war through diplomacy if possible, "but we do not have intention to surrender."

As for Mariupol, Foreign Minister Dmytro Kuleba told CBS' "Face the Nation" that the remaining Ukrainian troops and civilians in Mariupol are basically encircled. He said they "continue their struggle," but that the city effectively doesn't exist anymore because of extensive destruction.

Ukrainian President Volodymyr Zelenskyy sent Easter greetings via Twitter, saying: "The Lord's Resurrection is a testimony to the victory of life over death, good over evil."

If Mariupol falls, Russian forces there are expected to join an all-out offensive in the coming days for control of the Donbas, the eastern industrial region.

The bombardment and street fighting in Mariupol have killed at least 21,000 people, by the Ukrainians' estimate. A maternity hospital was hit by a lethal Russian airstrike in the opening weeks of the war, and about 300 people were reported killed in the bombing of a theater where civilians were taking shelter.

An estimated 100,000 remained in the city out of a prewar population of 450,000, trapped without food, water, heat or electricity.

"All those who will continue resistance will be destroyed," Maj. Gen. Igor Konashenkov, the Russian Defense Ministry's spokesman, said.

Drone footage carried by the Russian news agency RIA-Novosti showed towering plumes of smoke over the steel complex, which sits on the outskirts of the bombed-out city on the Sea of Azov.

Russian forces, meanwhile, carried out aerial attacks near Kyiv and elsewhere in an apparent effort to weaken Ukraine's military capacity ahead of the anticipated assault.

After the sinking of the flagship of Russia's Black Sea Fleet last week in what the Ukrainians boasted was a missile attack, the Kremlin had vowed to step up strikes on the capital.

Russia said Sunday that it had attacked an ammunition plant near Kyiv overnight with precision-guided missiles, the third such strike in as many days.

At least five people were killed by Russian shelling in Kharkiv, Ukraine's second-largest city, on Sunday, regional officials said. The barrage slammed into apartment buildings and left the streets scattered with broken glass and other debris, including part of at least one rocket.

Kharkiv Mayor Igor Terekhov, in an address marking Orthodox Palm Sunday, lashed out at Russian forces for not letting up the bombing campaign on such a sacred day.

And Zelenskyy, in his nightly address to the nation, called the bombing in Kharkiv "nothing but deliberate terror."

A regional official in eastern Ukraine said at least two people were killed when Russian forces fired at residential buildings in the town of Zolote, near the front line in the Donbas.

Zelenskyy said Russian troops in parts of southern Ukraine have been carrying out torture and kidnappings, and he called on the world to respond with more weapons and tougher sanctions.

"Torture chambers are built there," he said in his address. "They abduct representatives of local governments and anyone deemed visible to local communities."

Malyar, the Ukrainian deputy defense minister, said the Russians continued to hit Mariupol with airstrikes and could be getting ready for an amphibious landing to reinforce their ground troops.

On what is supposed to be Christianity's most joyful day, Pope Francis made an anguished Easter Sunday plea for peace in the "senseless" war in Ukraine and in other armed conflicts raging in the world, and voiced worry about the risk of nuclear warfare.

"May there be peace for war-torn Ukraine, so sorely tried by the violence and destruction of this cruel and senseless war into which it was dragged," Francis said, speaking from the central balcony of St. Peter's Square.

The pontiff had just finished celebrating Easter Mass in the square for the first time since the pandemic began in early 2020. Applause broke out from many of the crowd, estimated by the Vatican to number 100,000 in the square and on a nearby avenue, when he mentioned Ukraine.

"Please, please, let us not get used to war," Francis pleaded, after denouncing "the flexing of muscles while people are suffering." Yet again, the pontiff didn't cite Russian President Vladimir Putin for the decision to launch the invasion and attacks against Ukraine on Feb. 24.

People's hearts are filled with "fear and anguish, as so many of our brothers and sisters have had to lock themselves away in order to be safe from bombing," the pontiff said.

"Let us all commit ourselves to imploring peace, from our balconies and in our streets," Francis said. "May the leaders of nations hear people's plea for peace."

In a reference to the threat of nuclear warfare, Francis quoted from a noted declaration of 1955: "'Shall we put an end to the human race, or shall mankind renounce war?'"

He was quoting from a manifesto written by philosopher Bertrand Russell and physicist Albert Einstein. The manifesto's text, sounding a grim warning against the consequences of nuclear warfare, was issued a few months after Einstein died.

Meanwhile, in Britain, the leader of the Anglican church, Archbishop of Canterbury Justin Welby, called for Russia to declare a cease-fire and withdraw from Ukraine.

Noting that in the Eastern Orthodox church followed by many in Russia and Ukraine Sunday marks the start of Holy Week -- with Easter coming on April 24 -- Welby exhorted Russia to withdraw from Ukraine and commit to talks.

Francis also drew attention to other wars in the speech known by its Latin name "Urbi et Orbi" -- to the city and to the world.

"May the conflict in Europe also make us more concerned about other situations of conflict, suffering and sorrow, situations that affect all too many areas of our world, situations that we cannot overlook and do not want to forget," Francis said.

But Francis found hope in the "open doors of all those families and communities that are welcoming migrants and refugees throughout Europe," referring to the some 10 million people who have either fled Ukraine or are internally displaced by the war.

In a related development, the Clio, a $65 million superyacht tied to Oleg Deripaska, the Russian aluminum billionaire whose connections to Putin have put him on sanctions lists, is on the move again after being anchored off the Maldives.

The 239-foot yacht had been in the Indian Ocean for at least two months as scrutiny around Deripaska and other oligarchs close to Russia's president increased after the invasion of Ukraine. The Clio anchored in Gocek, Turkey, Saturday morning local time and was sailing in the region, according to vessel data analyzed by Bloomberg News.

Deripaska, who has been under U.S. sanctions since 2018, sits atop an industrial conglomerate that includes a major provider of military equipment to Russia. The European Union sanctioned him earlier this month on the same day the bloc targeted Putin's adult daughters. The U.S. and EU have levied sanctions on tycoons.

Authorities in the U.S. and allies in the U.K., Italy, France and Germany are trying to locate the luxury boats and other properties of Russian tycoons.

A representative for Melnichenko said he has no political affiliation and will be challenging his inclusion on the EU sanctions list.

The Clio previously appeared to be on the move around March 20, heading northwest from the Maldives. On March 21, its automatic identification system, displayed a message that would have been inputted by the crew indicating there was "armed security" on board, according to data compiled by Bloomberg. That message isn't unusual to ward off pirates in the region.

A few days later, the identification system showed Clio was headed to Dubai, before making a U-turn south, displaying it was en route to Mumbai. It then made its way back to Male, the capital of the Maldives, where it had been anchored, ahead of the 3,000-mile journey northwest through the Red Sea and Suez Canal toward Port Said.

The actions by the U.S. and its allies have scattered Russian yachts to locales perceived as less likely to seize the pleasure boats, including parts of the Middle East and the Caribbean, according to space-based analytics and data business Spire Global Inc. Megayachts owned by Russians account for as much as 10% of the global fleet, according to industry watcher The Super Yacht Group. 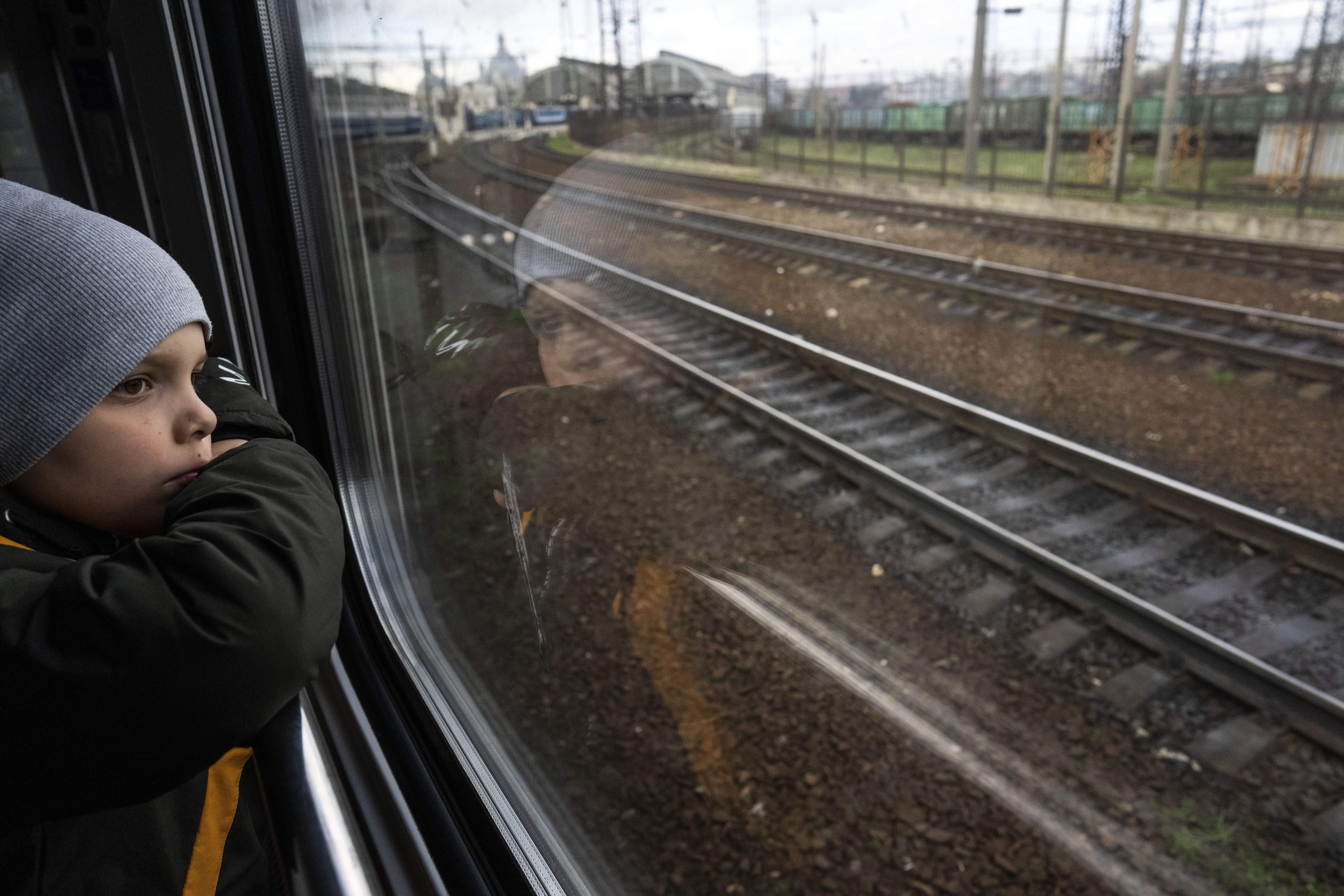 Sergei looks out of the window of a train minutes before arriving with his family in Lviv, from Kyiv, Ukraine, Sunday, April 17, 2022. (AP Photo/Rodrigo Abd) 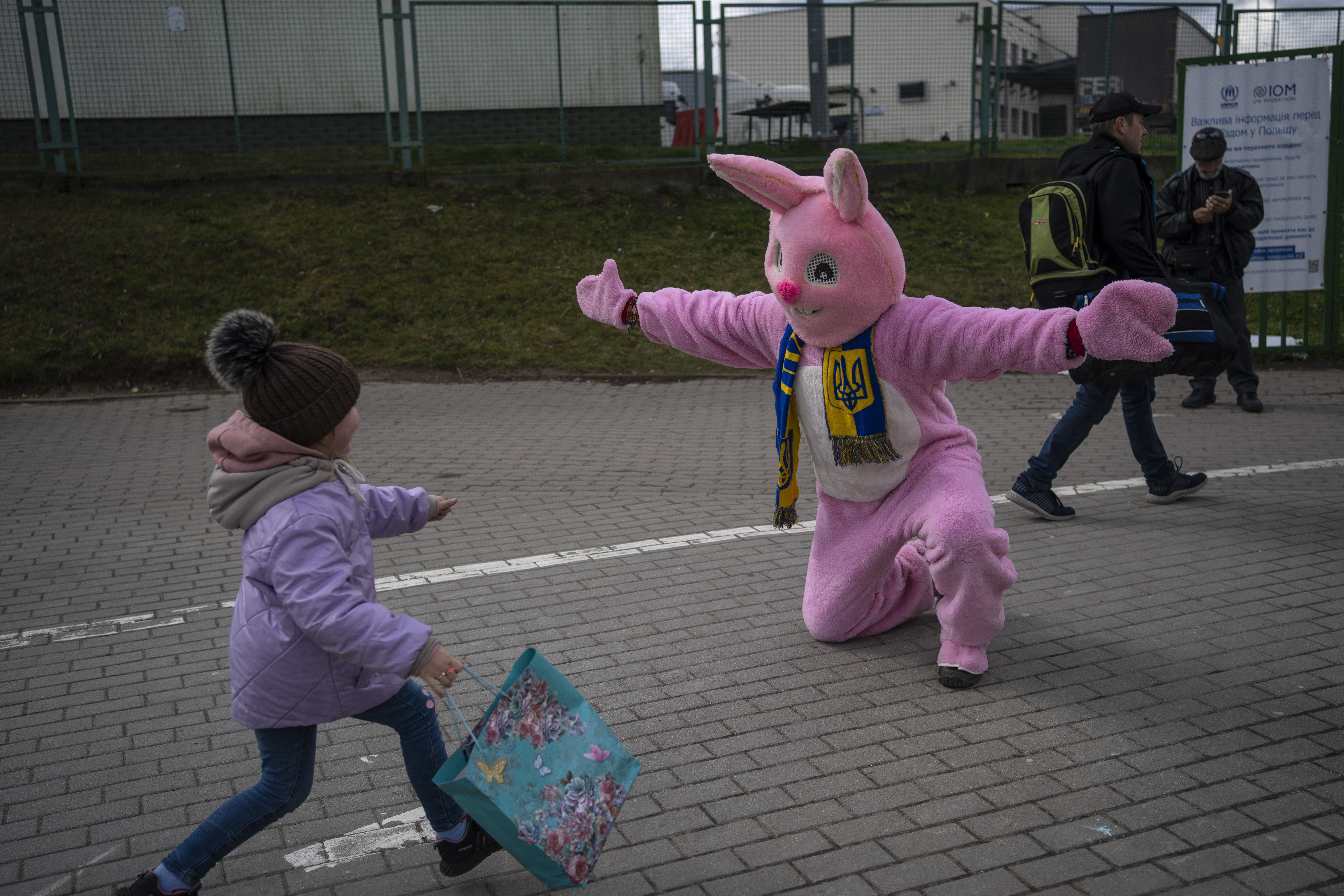 Performer Ben Dusing, from Fort Mitchell, Kentucky, US, wears an Easter rabbit costume as he prepares to embrace Lilia at the Medyka border crossing in Poland on Sunday, April 17, 2022. (AP Photo/Rodrigo Abd) 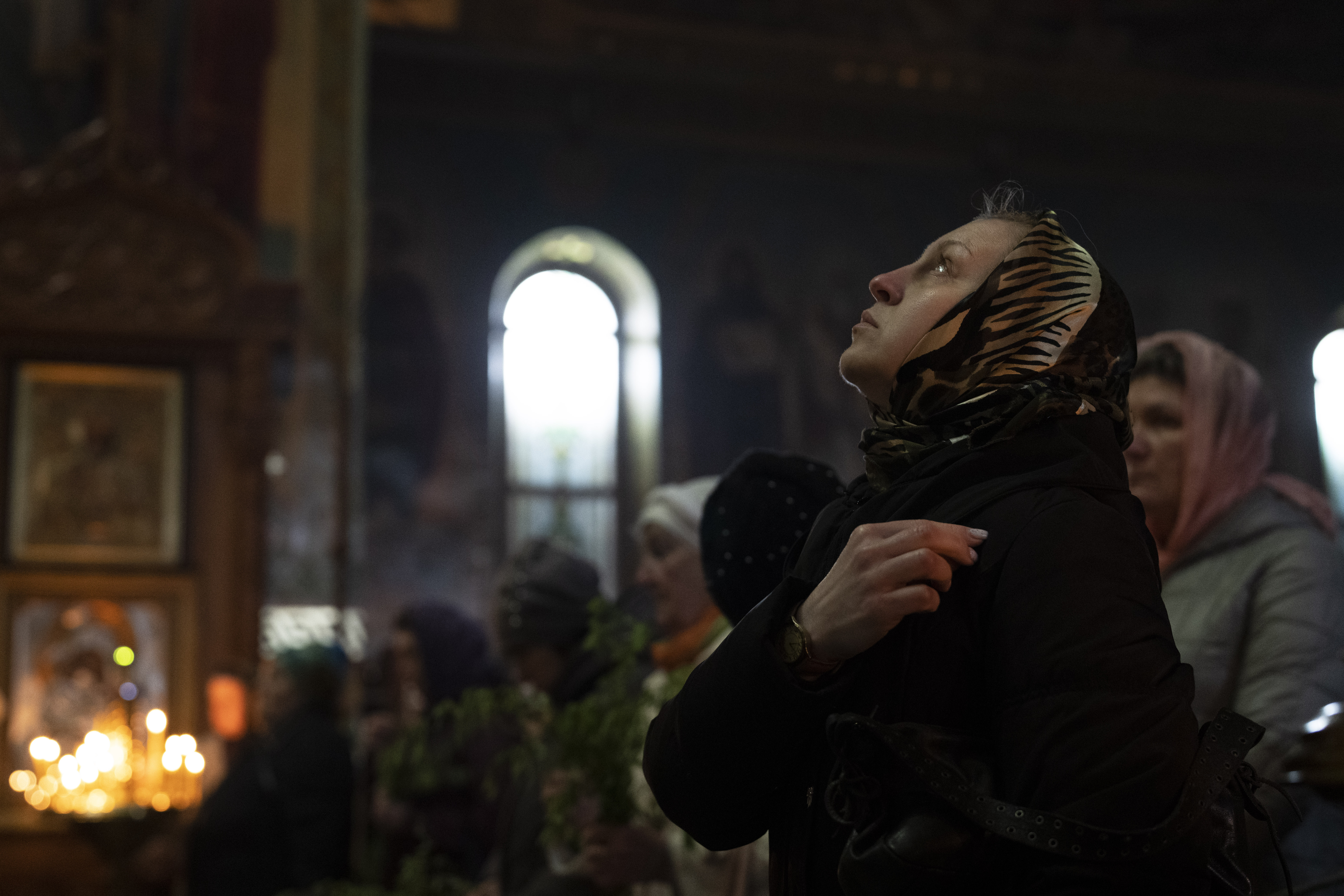 A woman makes the sign of cross as she participates in an Orthodox service celebrating Palm Sunday, in the Holy Trinity Cathedral, in Kramatorsk, Ukraine, Sunday, April 17, 2022. (AP Photo/Petros Giannakouris) 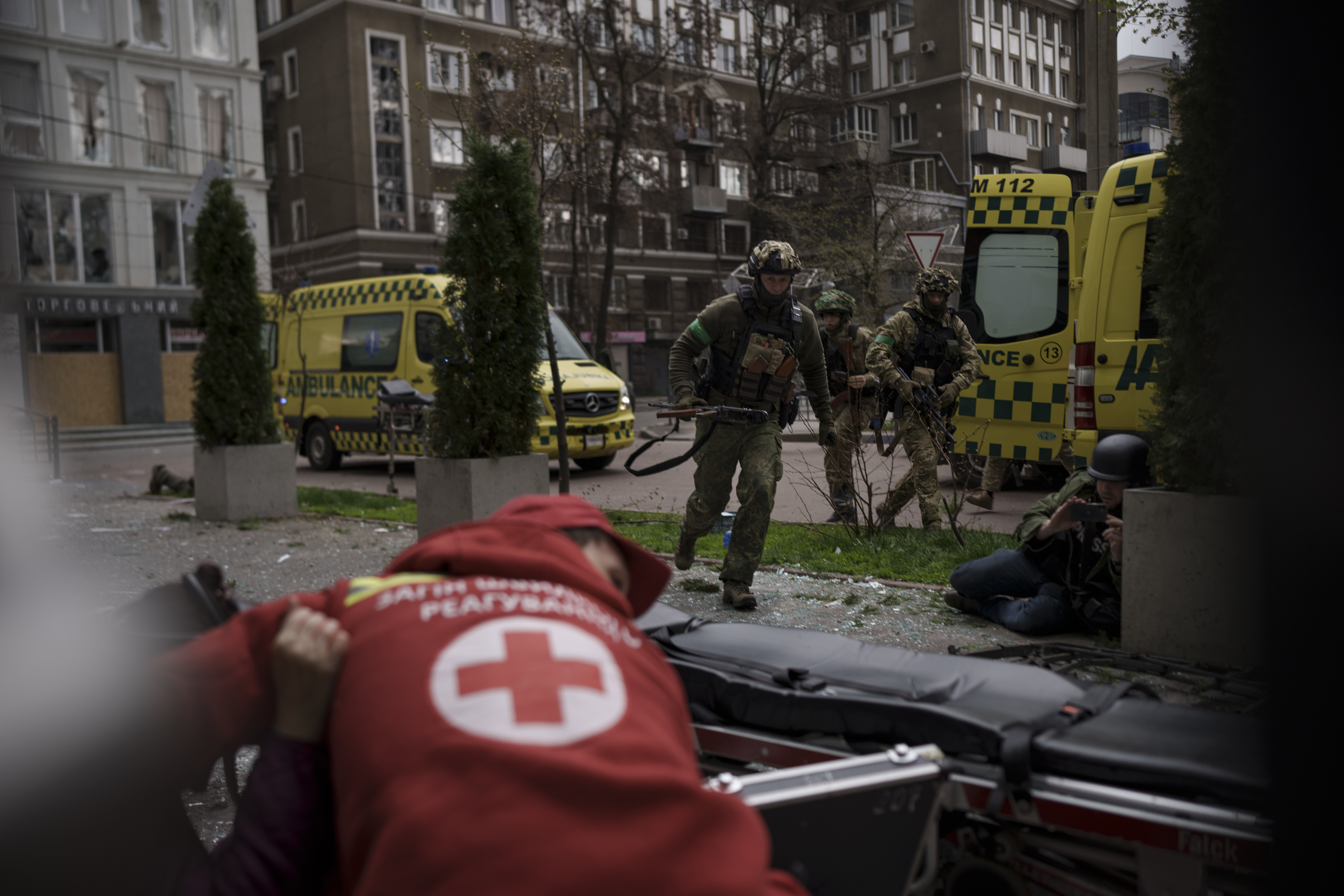 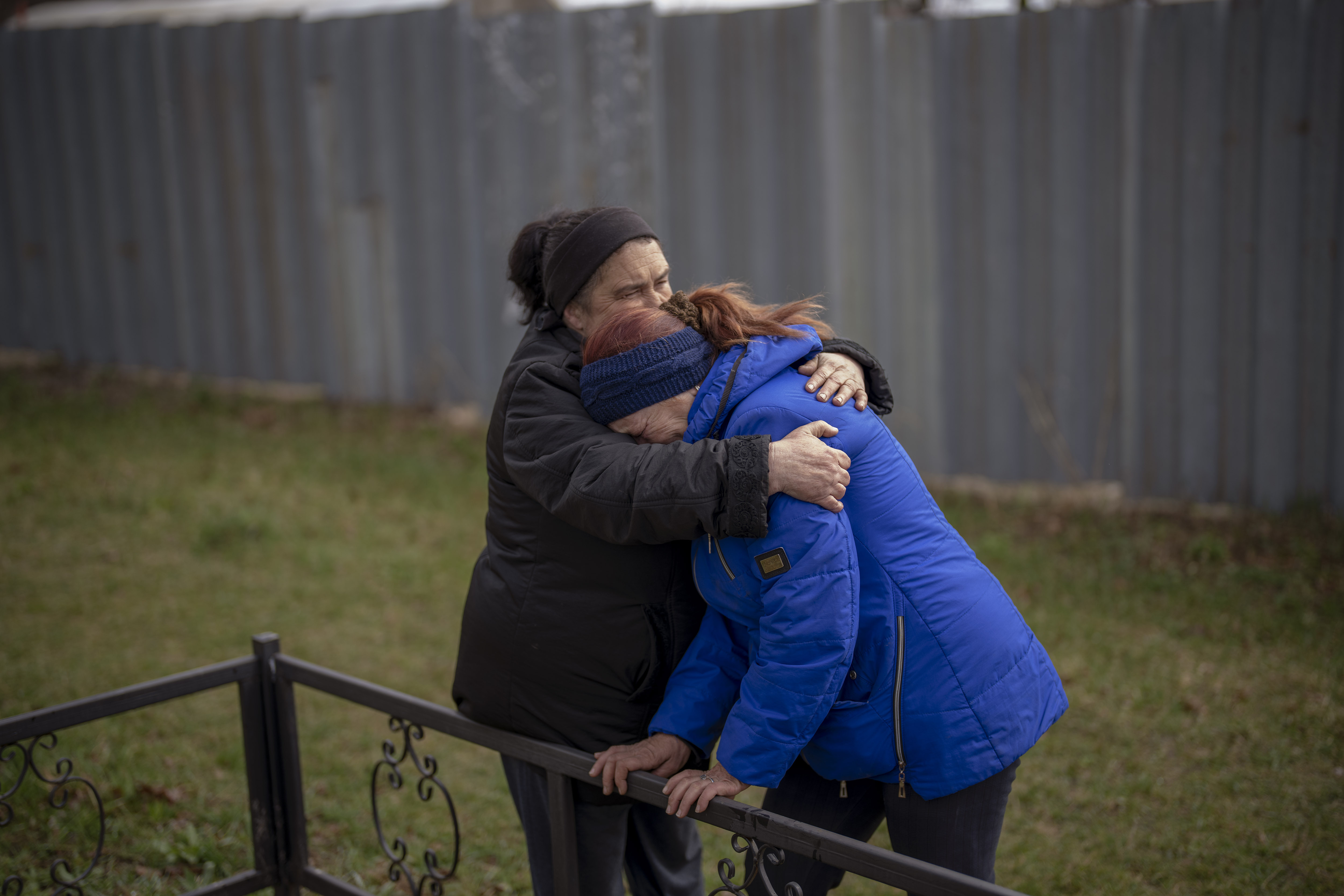 CAPTION CORRECTS LOCATION - Ira Slepchenko, 54, and Valya Naumenko, 47, embrace each other, mourning the death of their respective husbands, during an exhumation of four civilians killed and buried in a mass grave in Mykulychi, Ukraine on Sunday, April 17, 2022. All four bodies in the village grave were killed on the same street, on the same day. Their temporary caskets were together in a grave. On Sunday, two weeks after the soldiers disappeared, volunteers dug them up one by one to be taken to a morgue for investigation. (AP Photo/Emilio Morenatti) 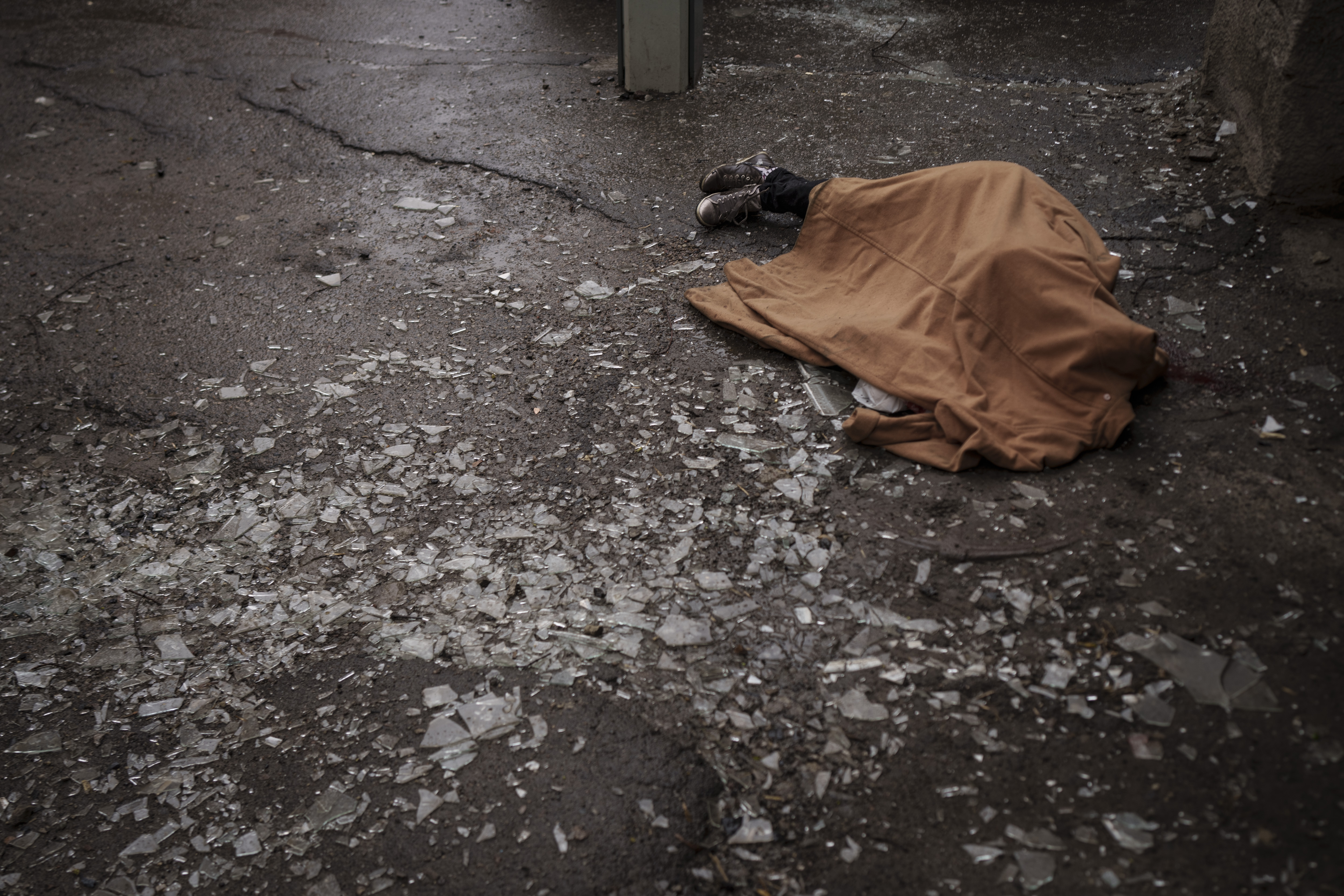 The body of a woman killed a Russian bombardment lies covered on a sidewalk in downtown Kharkiv, Ukraine, Sunday, April 17, 2022. (AP Photo/Felipe Dana) 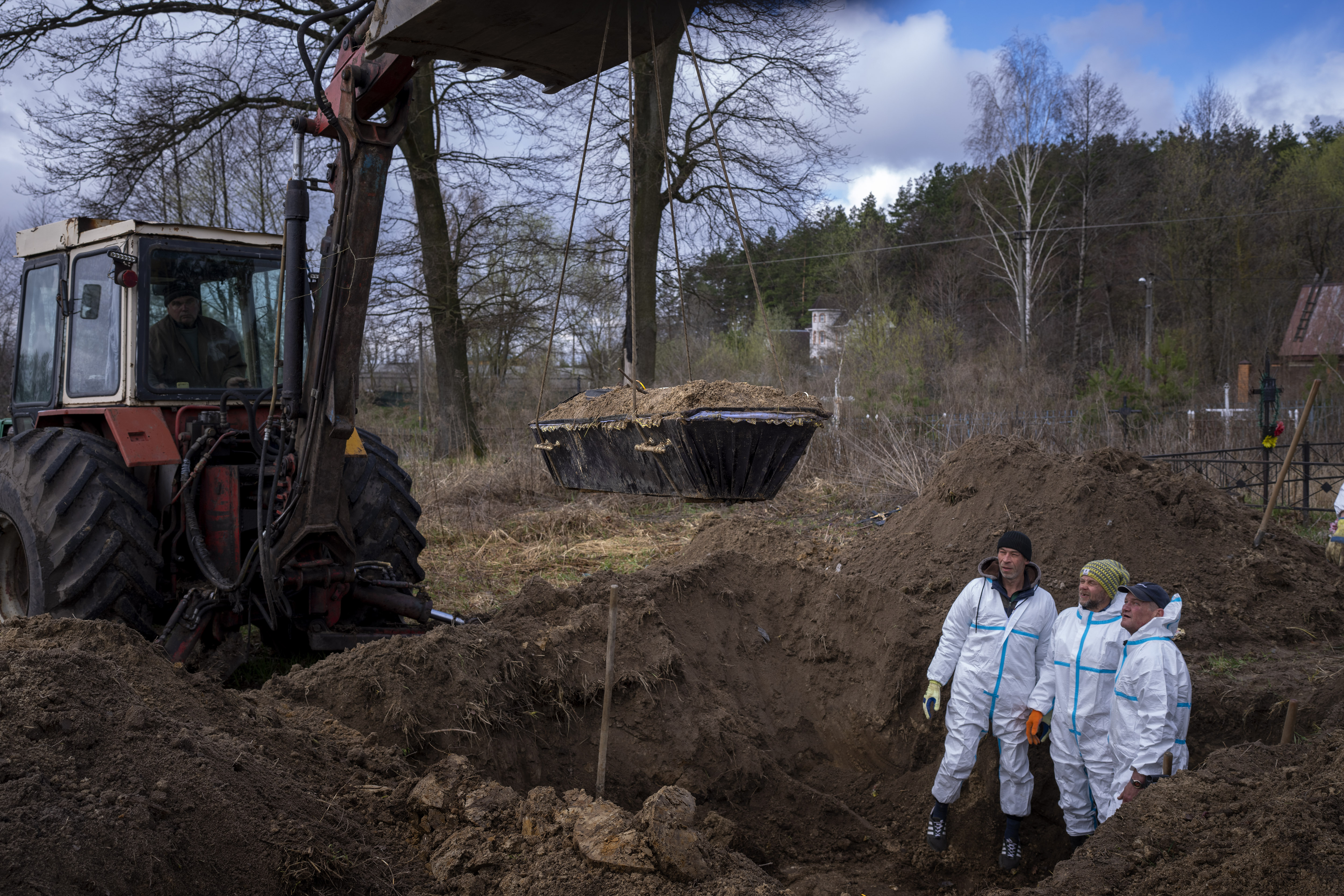 A crane lifts a casket as volunteers remove the soil from a mass grave during an exhumation of four civilians killed in Mykulychi, Ukraine on Sunday, April 17, 2022. All four bodies in the village grave were killed on the same street, on the same day. Their temporary caskets were together in a grave. On Sunday, two weeks after the soldiers disappeared, volunteers dug them up one by one to be taken to a morgue for investigation. (AP Photo/Emilio Morenatti) 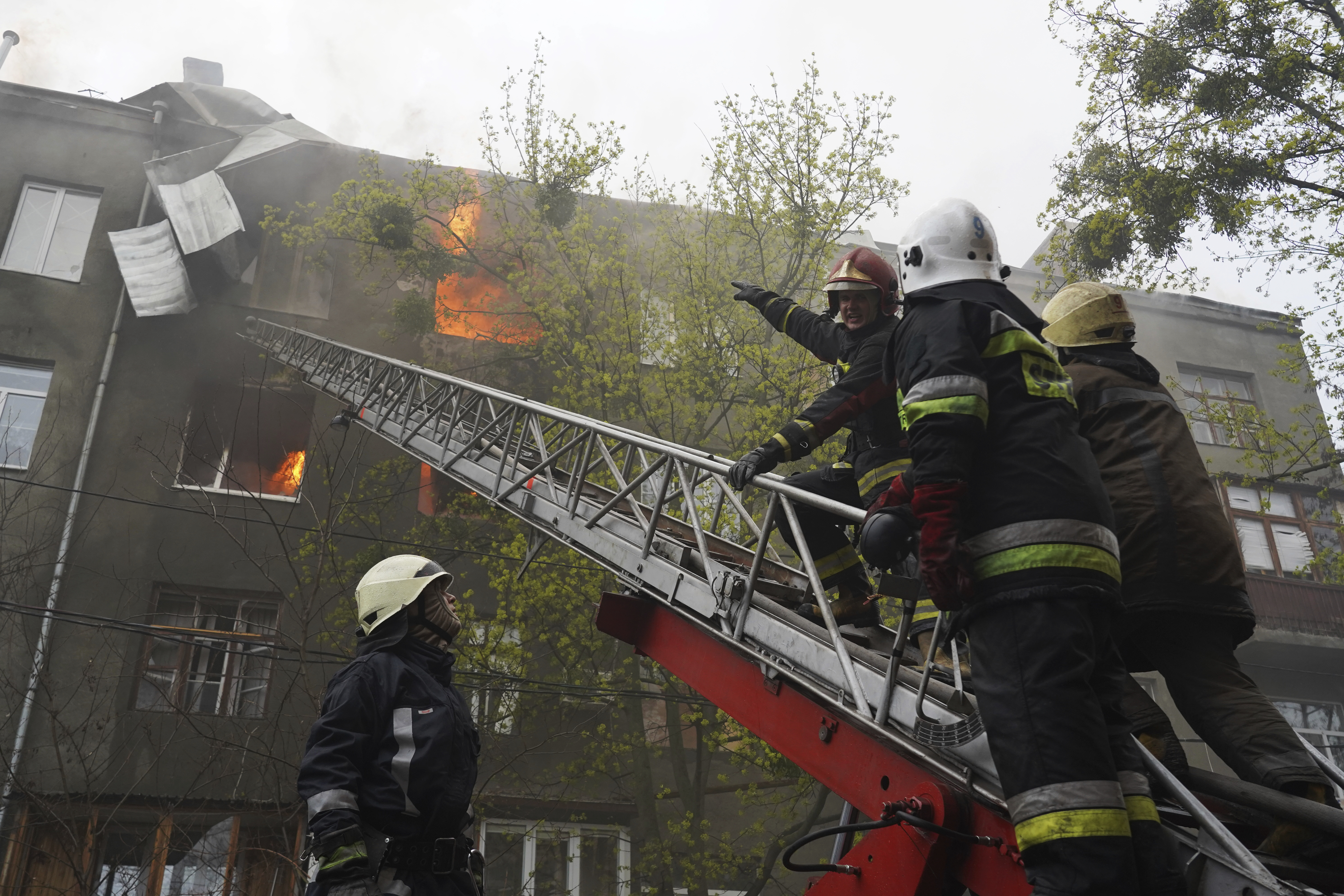 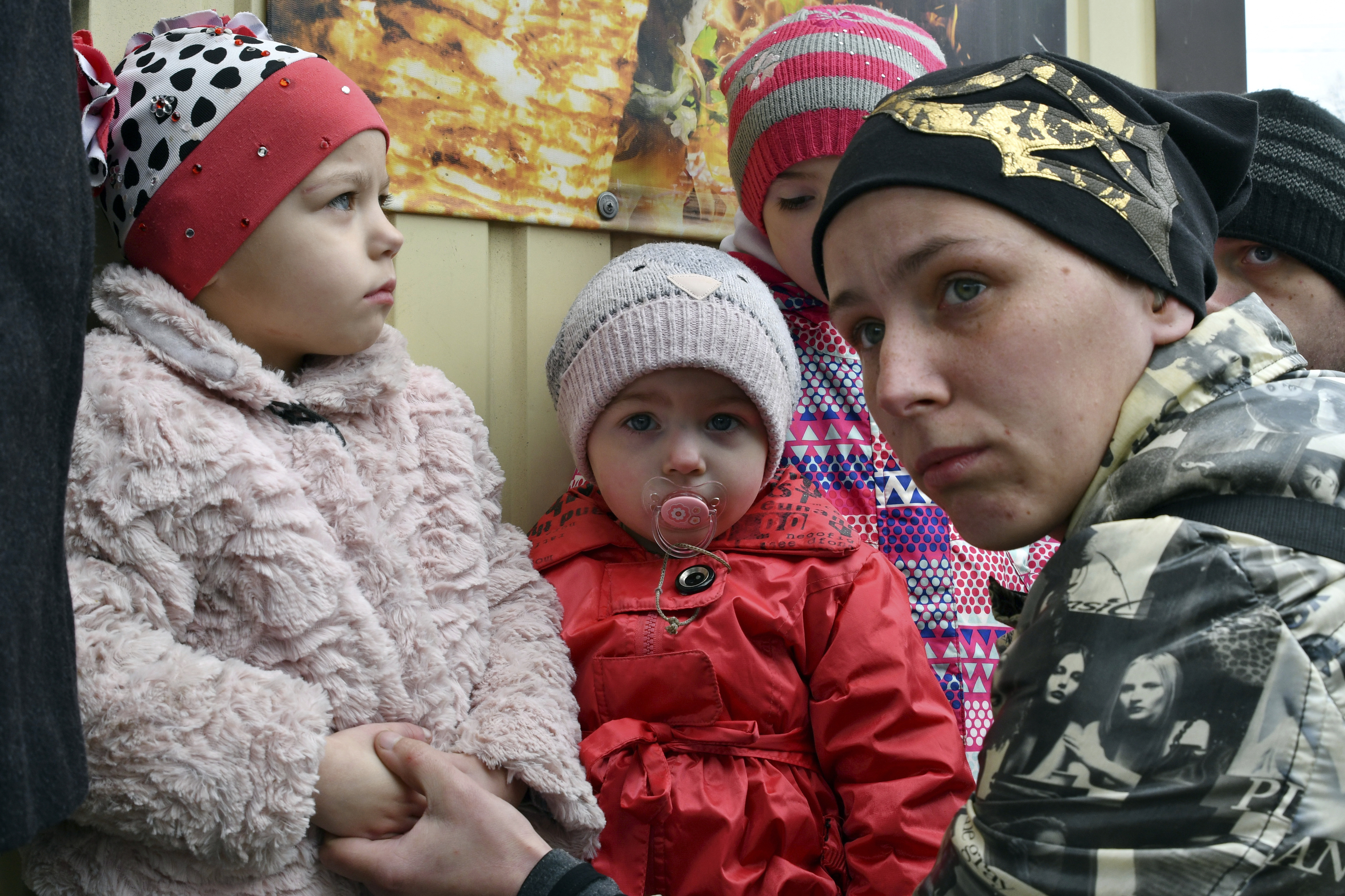 Anastasia covers her daughters Anna, 2, center, Nadezhda, 5, left, and Sofia, 6, as they hide behind a building after hearing shelling, during an evacuation of civilians at a bus station in Kramatorsk, Ukraine, Sunday, April 17, 2022. Anastasia's family are leaving Kramatorsk as nearby shelling are getting worse. (AP Photo/Andriy Andriyenko)

Print Headline: Russians say give up or die, hear no reply