In Arkansas, covid pills struggle to catch on despite effectiveness

Antiviral pills prove to be effective, but access, awareness seen as lacking by Jeannie Roberts | April 17, 2022 at 3:45 a.m. 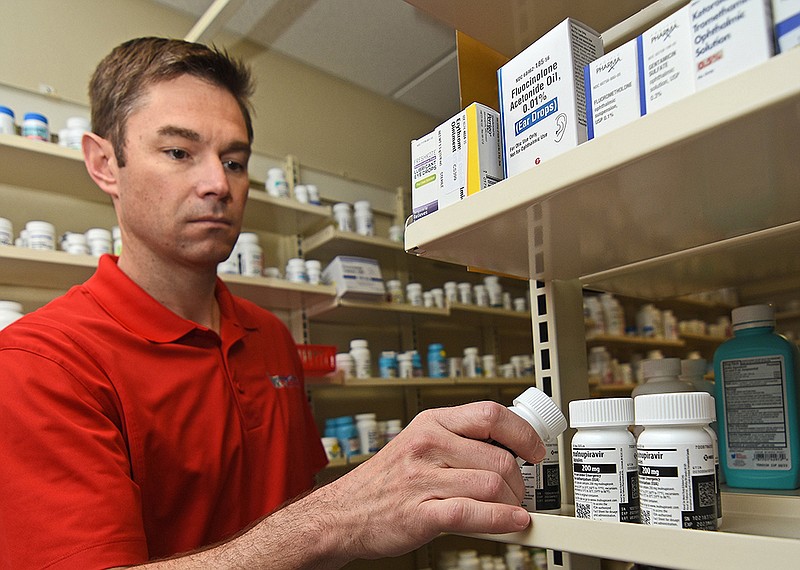 Philip Way, co-owner of Remedy Drug in Little Rock, takes a bottle of covid-19 antiviral pills from the shelf Friday. Way said his store has only filled about 30 prescriptions for the drugs. “I don’t think that there is a lot of awareness about it,” he said. (Arkansas Democrat-Gazette/Staci Vandagriff)

Pharmacists and health care providers around the state say antiviral covid-19 pills significantly reduce the disease's impact, but limited distribution, poor access to testing and lack of awareness are handicapping the pills' potential.

U.S. public health and government officials pitched the pills as major pieces of the road map out of the pandemic, but uptake has been slow.

Fewer tests are being performed.

Finding the medication can be difficult; just 1 in every 7 Arkansas pharmacies carries them.

And despite marketing efforts, many still aren't aware of the the antiviral pills, including health care providers, said Nicki Hilliard, director of professional affairs at the Arkansas Pharmacists Association.

"We have pills on the shelves not being used like they should be," Hilliard said.

The antivirals -- Pfizer's Paxlovid and Merck's molnupiravir -- were approved in December by the U.S. Food and Drug Administration for emergency use. The drugs are taken orally and are designed to slow the disease's progression and to lessen hospital stays and the risk of death.

"Both of the covid oral medications work by stopping the body from making new covid virus particles. Once you infect a cell with the virus, it kind of hijacks your molecular mechanism of making new cells and converts into making virus particles," said Dr. Robert Hopkins, chief of general internal medicine at the University of Arkansas for Medical Sciences. "So the nirmatrelvir -- or the active ingredient in Paxlovid -- or the molnupiravir stop that process of making new viral particles."

Clinical trials have shown that Pfizer's Paxlovid reduced the risks of death and hospitalizations by 88%, while studies showed molnupiravir reduced risks by 30%. Both medications must be taken within five days of symptoms appearing.

The pills are only available for nonhospitalized patients at high risk of developing severe covid, for the disabled and for older Americans.

The earlier the patient is tested, the more effective the medication will be, Hopkins said.

"If you don't take it early on in the infection, you already likely have widespread infection and the damage is done, so to speak," said Hopkins, who is also the chair of the U.S. Department of Health and Human Services' National Vaccine Advisory Committee.

"So the goal is that you start early so you stop the production of virus, stop the progression of illness and, hopefully, let the body's immune system catch up and clean things up from there and get you back on your feet," Hopkins said.

Testing for the virus is not as easy or accessible as it once was, Hopkins noted. Many of the large-scale testing sites, such as the ones UAMS operated, have closed, and federal funding to cover the cost of covid-19 testing for the uninsured dried up last month.

"We've had to put our staff back to work," Hopkins said. "There are still pharmacies that will test and some still have home tests, but people without health insurance are now being charged a significant amount to get tested."

The Arkansas Department of Health has committed to continuing to provide free coronavirus testing for uninsured individuals despite the end of the federal program that funded testing for the uninsured.

Hilliard, with the Pharmacists Association, said it's vital that patients act quickly from the first symptom.

"If they become sick, they need to get tested," Hilliard said. "And home tests are OK. They are sufficient for moving forward to get the antivirals."

The federal government provides the antiviral pills free of charge to the states, which then distribute the medication to pharmacies.

Access to the pharmacies that dispense the pills is limited in some places because of low participation. Out of the more than 750 pharmacies in the state, only 100 pharmacies are distributing the antiviral pills.

The state Health Department partnered with the Arkansas chapter of the Community Pharmacy Enhanced Services Network as well as the federal retail partner (Walmart) to enroll community pharmacies to dispense the pills, said Dr. Atul Kothari, medical director for the Healthcare Associated Infections Program at the Health Department.

"There is a survey link on our therapeutics webpage, which allows unaffiliated pharmacies to directly enroll in the program," Kothari said. "Outreach to pharmacies was also done through the Arkansas [Pharmacists] Association."

Pharmacist Philip Way, co-owner of Remedy Drug in Little Rock, said he agreed to provide the antivirals for the same reason the pharmacy provides the vaccines.

"We want to be part of the solution," Way said.

None of the company's 10 other drugstores in the state dispenses the covid-19 antiviral pills.

Perhaps the biggest hurdle in getting the antiviral pills to the public is the fact that pharmacists cannot prescribe the pills -- unlike monoclonal antibody infusion treatments.

The FDA included a "scope of authorization" in the emergency approval that limits prescribing powers for the pills to physicians, advanced practice registered nurses and physician assistants.

"We've been fighting that," Hilliard said. "The covid patients have to be referred to a health care provider, and that has been problematic. It slows down the process and shortens that window of opportunity. We're working on a national level to allow pharmacists to prescribe the antivirals. They don't usually go into scope of practice for these emergency use authorizations. If it was on a state level, the state would allow it."

Crumbaugh said not allowing pharmacists to prescribe the antivirals led to a very slow start in getting the pills out there.

"A lot of local providers didn't feel comfortable prescribing it," Crumbaugh said. "It didn't catch on quite as quickly."

In Paris, Crumbaugh said there had to be a conference call with the pharmacist, the Health Department and the local health care providers to provide education on the pills and the process of prescribing them.

"Pharmacies are the most accessible health care providers out there. In a lot of communities, we're the only providers," Crumbaugh said. "We're up to date on products and therapeutics. We were more than willing to do this. Quite frankly, it has been an honor as a pharmacist to take on the role that we have in fighting this pandemic."

Way, the co-owner of Remedy Drug, said the antiviral covid-19 pills require a much deeper process by the health care provider and the pharmacist because of the risk of interactions with conditions like kidney or heart diseases. Longer conversations with the patients are necessary before filling the prescription and after it is dispensed, Way said.

"We generally have a pretty involved conversation with the doctor or nurse prescribing it," Way said.

In the case of kidney disease, the prescribing provider has to take into account the patient's kidney function test levels. Different levels require different dosages of the pills, Way said.

"We make sure the dose is accurate," Way said. "In January and February, half of the prescriptions we got needed dosage adjustments."

The pharmacists also have to submit daily reports detailing the number of the antiviral pills that were dispensed and how many remain in inventory.

Unlike with the vaccines and monoclonal antibody infusions, the pharmacists are typically not paid an extra administration fee.

"Because of the significant drug interactions, it's taking pharmacists 40 minutes or longer -- talking to the health care provider and doing the patient screenings -- to process the prescription," Hilliard said. "Forty minutes is a lot to invest to not get paid for it. A lot of the pharmacists are doing it anyway because they are serving the public."

In March, the state Board of Finance voted to allow a fee from $1.50 to $20 per prescription that's paid by the state's Employee Benefits Division to pharmacists in the state for dispensing the covid-19 pills.

The Employee Benefits Division administers the health insurance plans for more than 100,000 public school and state employees and retirees.

Still, awareness is lacking, according to pharmacists.

Crumbaugh said the Express Rx in Paris has dispensed less than 40 of the antiviral prescriptions, and Way said Remedy Drug has administered only about 30.

"I don't think that there is a lot of awareness about it," Way said.

More people need access to the drugs because they are very effective against the virus, he added.

"I can tell you that we have followed up with our patients, and the drugs were very well tolerated," Way said. "The outcome has been very good."