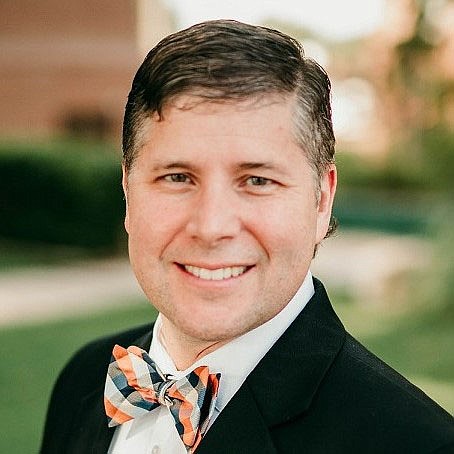 Dennis Rittle was chosen on April 1, 2022, to be Northwest Arkansas Community College's next president.

BENTONVILLE — Northwest Arkansas Community College has chosen its next leader, one from another community college in Kansas.

The Northwest Arkansas Community College board of trustees voted unanimously during a special meeting Friday to enter into contract negotiations with Dennis Rittle, president of Cowley College in Arkansas City, Kan., to be the Bentonville college’s fourth president.

That decision capped a week in which the board interviewed and dined with each of the three finalists for the job. On Friday, the board met in executive session for about 90 minutes before deciding to hire Rittle.

DeAnne Witherspoon, board chairwoman, said contract negotiations with Rittle will begin next week.

Evelyn Jorgenson, the college’s president since 2013, is retiring this summer. The board hired the Association of Community College Trustees of Washington in October to help find her replacement.

Fifty-three people applied. A college search committee chose eight semifinalists. The committee interviewed the semifinalists before recommending the three finalists to the board last month.

“They were all good choices because the search committee did a great job,” Witherspoon said. “And then amongst ourselves, [Rittle] was our top choice, and I think he’ll be great.”

Ron Branscum, a board member who also served on the search committee, said the committee put in a lot of work, as did the board when it came time to interview the finalists.

“And so I think everybody’s done their homework. As a good student should,” Branscum said.

A salary range for the position was not advertised, Branscum said. Jorgenson is earning $205,000 this school year, according to Grant Hodges, a college spokesman.

Cowley College, located in south-central Kansas, had 3,762 students as of the 2019-20 school year, according to the school’s website. Rittle has been Cowley’s president since July 2015.

Rittle was technical advancement director at Butler Community College in El Dorado, Kan., from May 2007 to February 2010, according to his resume. He then served as associate director of technical programs and curriculum at the Kansas Board of Regents from March to December 2010.

He went on to become dean of academic affairs at Brown Mackie College in Salina, Kan., until July 2012. He left that job to become provost and executive vice president of learning at Ozarka College in Melbourne — also a community college — for three years, until taking the Cowley president’s job.

Prior to his career in higher education, Rittle spent six years as lead pastor and CEO of Crossroads Community Church in Mechanicsburg, Pa. He’s also a military veteran, having served as a meteorological technician and weather station operations chief with the U.S. Air Force and Air National Guard, according to his resume.

He received his doctorate in organizational leadership from Regent University in Virginia Beach, Va., in 2009.

Rittle, in his cover letter submitted along with his resume for the job, wrote that he and his family agreed his three years spent at Ozarka College “were the most fulfilling and enjoyable years during my professional career” because of the camaraderie among his colleagues and the “cultural fit” within Arkansas. His letter noted he has many close colleagues in Arkansas who have encouraged him and supported his interest in the college’s president position.

He also wrote he has a “strong higher education and business acumen as well as a highly seasoned work history in both workforce development and general education studies.”

Northwest Arkansas Community College is the largest two-year college in the state. The school reported an enrollment of 6,402 students as of the 11th day of classes this semester.