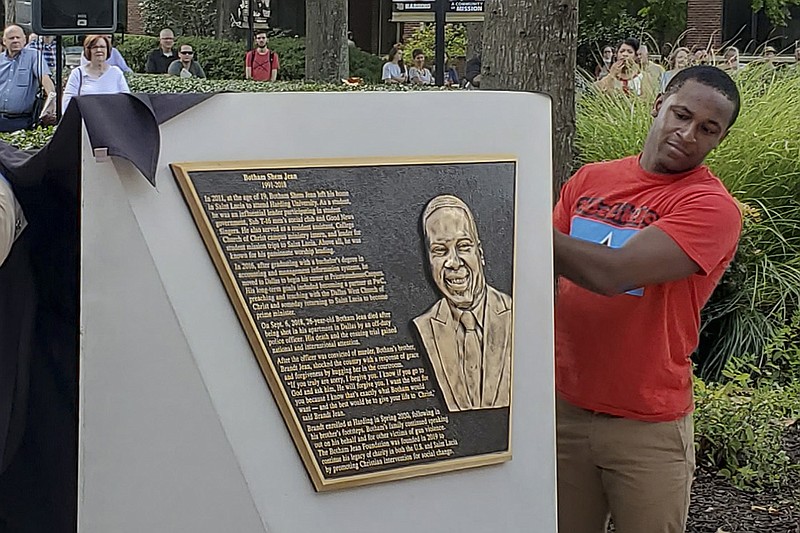 Brandt Jean, a current Harding University student and the brother of Botham Jean, helps unveil the memorial plaque to his brother Wednesday at Harding University in Searcy. Botham Jean was shot to death in 2018 by a Dallas police officer who said she mistakenly thought she was in her apartment and that he was an intruder. (Arkansas Democrat-Gazette/Ashton Eley)

SEARCY -- Harding University leaders dedicated a memorial for alumnus Botham Shem Jean on Wednesday afternoon -- what would have been his 30th birthday.

Jean, then 26, was shot and killed Sept. 6, 2018, in his Dallas apartment by an off-duty police officer, who was convicted of his murder in 2019. His death and the following trial garnered international attention.

A sea of attendees crowded in front of the David B. Burks American Heritage Building on the university's main campus to honor Jean's memory. Jean was an influential leader on campus and beyond, Harding University President David B. Burks said.

In 2011, then 19-year-old Jean left his home in Saint Lucia to attend Harding University. In 2016, he graduated with a bachelor's degree in accounting and management information systems.

He took part in student government, Sub T-16 men's social club and Good News Singers. He also served as a resident assistant, College Church of Christ campus ministry intern and leader for student mission trips to his home country in the Caribbean. Above all, he was known for his passionate worship leading, according to the memorial plaque.

"The pain of losing my son never goes away, but we are comforted by the life that he lived and the promise from God that those who obey his word receive eternal life," Jean's mother, Allison Jean, said.

Effects from Jean's life and death rippled throughout the country.

Texas Gov. Greg Abbott signed the Botham Jean Act into law in June, making it illegal for Texas officers to disarm body cameras during the course of an investigation.

Multinational professional services firm PricewaterhouseCoopers, where Jean worked as an accountant, created a meeting space named for Jean and placed a portrait of him on the 20th floor of its Dallas building.

These gestures demonstrate the positive impact her son had on individuals and institutions, Allison Jean said.

"Like Paul, he finished his race in record time," she said. "His quest was to make this world a better place. The slogan 'Be Like Bo' was coined as more than a hashtag. It is symbolic of living an ambitious life centered around integrity, empathy and compassion for all mankind."

[Video not showing up above? Click here to watch » arkansasonline.com/930jean/]

She went on to quote her son's words, which are also displayed on the side of the memorial bench.

"We are not alone as a community of believers, and I am comforted when I know I am not the only one doing something," it reads.

After graduation, Jean moved to Dallas to begin his career at PricewaterhouseCoopers. He was reportedly in his apartment eating a bowl of ice cream when former officer Amber Guyger, now 33, shot him.

Guyger was returning home from work and mistook Jean's apartment for her own, which was on the floor directly below, according to testimony in Guyger's trial. Finding the apartment door ajar, she entered and shot him.

She later testified that she thought Jean was a burglar. She was fired from the Dallas Police Department and, after her murder conviction, was given a 10-year prison sentence in Texas. She is eligible for parole in 2024.

Brandt Jean, who helped unveil the memorial plaque in honor of his brother Wednesday, shocked many in 2019 when he hugged Guyger in the courtroom. The words he said to her are included on the memorial.

"If you truly are sorry, I forgive you. I know if you go to God and ask him, he will forgive you. I want the best for you because I know that's exactly what Botham would want – and the best would be to give your life to Christ," he said.

Brandt Jean followed in his brother's footsteps, enrolling at Harding in the spring of 2020.

During Wednesday's program, Burks announced the new "Botham Jean Inspiration Award" that will be given annually to a member of the Harding community for demonstrating exceptional faith and perseverance, and serving as a role model for all. This award will be presented each year at the university's homecoming, he said. However, he went on to announce the first recipient of this award -- Brandt Jean.

"The first recipient of this award made a worldwide impact when he modeled true forgiveness in a Texas courtroom and inspired millions of others," Burks said after a long, tearful pause to gather his emotions.

The PricewaterhouseCoopers Scholarship was also established in 2019 by Harding University and the company to support students from historically underrepresented populations who are pursuing degrees within the College of Business. The four scholarship recipients, all studying accounting, were present at Wednesday's event.

The Jean family has continued speaking out on Botham's behalf and for other victims of gun violence. In 2019, it founded the Botham Jean Foundation. Allisa Findley, president of the foundation and Jean's sister, said it is her way of keeping her brother alive.

"Our plans for the foundation is really just keeping Botham at the center," she said. "Everything that we do is to honor him, every good deed that we do, every person that we help. It's kind of my way of keeping his heart beating."

The foundation supports several community outreach efforts that Jean was passionate about in his native country, including Saint Lucia Boys' Training Center, The New Beginnings Transit Home, Marian Home for the Elderly and Gros Islet Community Outreach. In addition, it will be providing support to families affected by police brutality, according to its website.

During Wednesday's event, the Good News Singers performed "Living Hope." The Sub T-16 presented the family with a flag, signed by members with Jean's name and club symbols on it.

"It's a small way of showing our appreciation," said Thomas Schuler, who gave the encased flag to Findley after the ceremony.

Todd Gentry, College Church of Christ campus minister and friend, said in his remarks that in front of the Charles White Dining Hall was the perfect place to remember Jean "because Botham loved to eat, and this was one of his favorite places." Gentry's remarks elicited smiles from family members sitting nearby.

Often, when someone was feeling down, Jean would sing a song, Gentry said. He worked to make a difference in the lives of those around him. 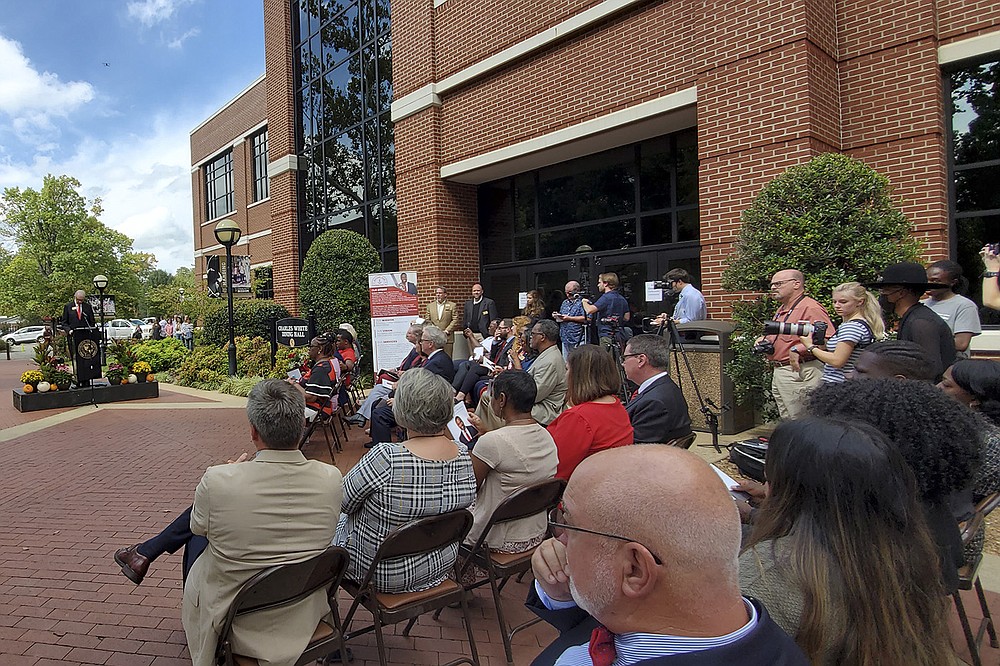