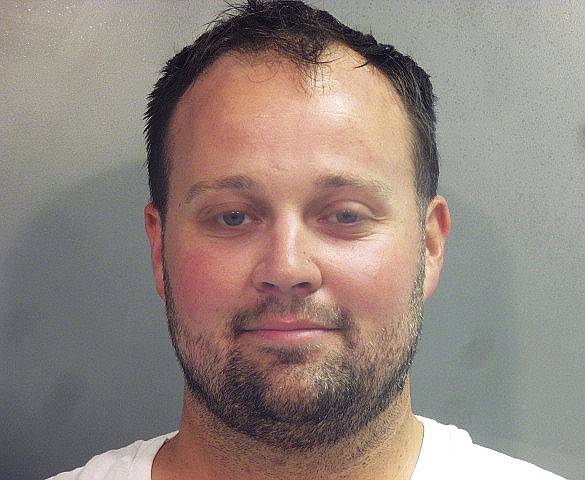 This photo provided by the Washington County (Ark.) Jail shows Joshua Duggar. Former reality TV Star Josh Duggar is being held in a northwest Arkansas jail after being arrested, Thursday, April 29, 2021 by federal authorities, but it&#x2019;s unclear what charges he may face. (Washington County Arkansas Jail via AP)

FAYETTEVILLE -- Lawyers for Josh Duggar are doubling down on their motions to suppress evidence in his child pornography case or dismiss the charges entirely.

If convicted, Duggar faces up to 20 years of imprisonment and fines up to $250,000 on each count.

Lawyers for Duggar filed several motions the past couple of months to dismiss the case or suppress evidence. They filed a response Friday to the government arguing, again, that federal agents intentionally misled a magistrate judge in order to get a search warrant issued.

"Here, there was deliberate, reckless, and/or grossly negligent conduct by law enforcement in obtaining the warrant. Specifically, the affiants provided false and misleading statements to the magistrate and omitted material facts -- and they did so deliberately, recklessly and, at a minimum, with gross negligence," according to the court filing.

Specifically, they maintain the agents weren't able to "successfully" download files containing child pornography from Duggar's computer but told the judge they did.

"Instead, an accurate statement would have been that the zip file contains 405 files but only 66 of these files were allegedly present on a device utilizing a business' IP address, and after 17 hours and 169 attempts, only 13 of those pieces were downloaded," according to the filing. "Against this backdrop, it is remarkable that a federal agent would represent, under oath, that this file was 'successfully downloaded.'"

Further, Duggar's lawyers argue the affidavit provided to the judge by the agents to secure a warrant left out significant material facts.

Specifically, the affidavit leaves out the used car dealership law enforcement sought to search was a business that regularly catered to the general public and had transient workers and employees, all of whom might have had access to unsecured wi-fi at the dealership.

In another response, Duggar's attorneys say federal investigators never examined the phones of three people they contacted who had access to the dealership.

"The amount of information contained on the three witnesses' cell phones is not limited to helping Duggar to establish that he was 'not the only individual who had access to the lot,'" according to the court filing. "The phones would establish a multitude of information relevant to his defense. Though not an exhaustive list, information from the phones would establish what these individuals' search for on the internet, whether they possess technical abilities in any manner related to (for example) setting up partitions on hard drives, using file sharing software, knowing the business' wi-fi password, and the list goes on."

The government asserts there was no exculpatory evidence on the phones that it seized and searched, but the decision to return the phones to the witnesses without creating any record of the searches and without preserving the underlying evidence deprives Duggar of his constitutionally guaranteed access to evidence, according to the filing.

Federal prosecutors have said investigators looked at those phones and there was no relevant evidence to be found. And, further investigation showed none of the three individuals were present on Duggar's car lot when his computer was used to download child sexual abuse material, fatally undermining his claims.