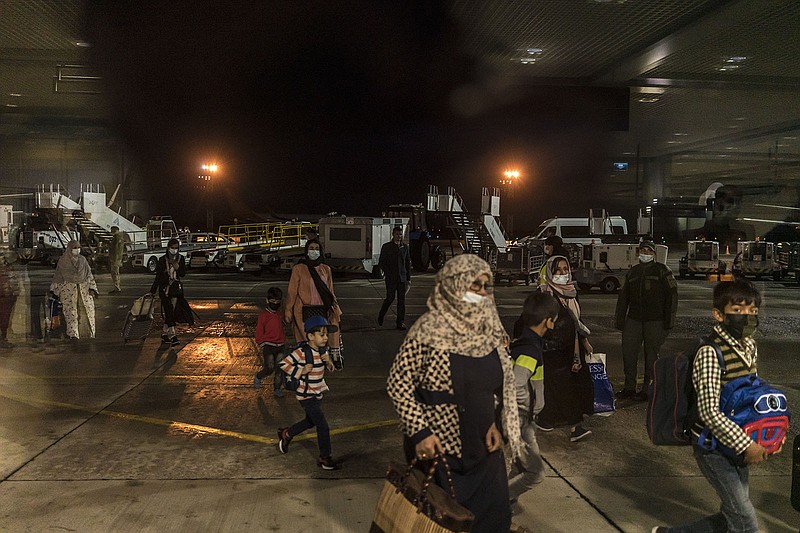 People who were evacuated from Kabul arrive on a Ukranian military flight at the airport in Boryspil, outside Kyiv, Thursday, Sept. 23, 2021. Few countries have been willing to fly rescue missions into Afghanistan since the Americans left. Ukraine is an exception. (Brendan Hoffman/The New York Times)

KYIV, Ukraine -- Before departing for Afghanistan, an elite team of Ukrainian troops gathered in a circle outside the airport and passed around a bottle of whiskey, a ritual meant to calm the nerves.

It was early in the morning of Sept. 16, and the troops, members of Ukraine's military intelligence service, known as the GUR, were about to embark on a daring plunge into the unknown: fly to Kabul and evacuate nearly 100 people, a mix of Ukrainian citizens and Afghans believed to be at high risk. They had flown similar rescue missions since the fall of Kabul in mid-August, but this would be the first since U.S. troops had departed, leaving the Taliban in full control.

Before boarding the plane, a senior officer informed the commander, Gen. Kyrylo O. Budanov, that the Taliban had guaranteed that the plane could land at Kabul's international airport, remain there unmolested while the evacuees boarded, and then safely depart. The whole process, they were assured, would take only a few hours.

"Do you believe them?" Budanov asked.

Ultimately, it would take seven days, two trips to Kabul and a nerve-rattling marathon of negotiations with novice and jumpy Taliban functionaries before the team returned to Kyiv. They took with them 96 exhausted Afghans, including a group of students from a Vatican-sponsored university and a 3-year-old boy who was wounded in the terrorist attack in late August at the Kabul airport's Abbey Gate.

For the Ukrainians, it was a crash course in dealing with a Taliban government struggling with internal division, bureaucratic chaos and a barely controlled inclination for violence. For days, the Taliban refused to release the people the Ukrainians hoped to rescue, repeatedly changing the terms of the evacuation deal, demanding official recognition from the Ukrainian government, and at one point threatening to commandeer the plane.

But on Thursday, finally, the Afghans stepped out into a blustery autumn night in Kyiv, Ukraine's capital, following a flight that became an unexpected lifeline after many had given up hope of escape.

"I've been waiting for evacuation for a month and a half, but my family and I could never make it through," said Kharimi, 38, who had arrived in Kyiv with six family members, including a small daughter he hopes will now have a chance at a future. "First Ukraine, then God listened to our prayers." The New York Times is referring to Afghan evacuees by only their first names to protect their identities.

In the first weeks after Kabul fell to the Taliban on Aug. 15, a coalition of nations conducted a colossal, if often haphazard, airlift to extract tens of thousands of Afghans suddenly in grave danger because of their work for foreign governments or Afghan security services. But without the U.S. security blanket -- the last American C-17 cargo planes left at the end of August -- few countries have been willing to hazard their planes and their people to continue evacuations, leaving thousands of at-risk Afghans with few options for escape.

Enter Ukraine, a small but battle-hardened nation after years of war with Russian-backed separatists. After Kabul fell, Ukraine's giant Ilyushin military planes were among the first to arrive to help with the evacuation. At one point, a group of Ukrainian GUR officers left the security of the airport and, firing their rifles into the air, cleared a path for a pair of buses transporting journalists to safety.

Even though the Americans have departed, the Ukrainian mission is continuing, said Budanov, who at 35 has spent one-fifth of his life at war, much of that behind enemy lines as a military intelligence officer.

"Most countries in the West, in my opinion, won't do something if it's dangerous," he said. "We've been living with a war for seven years, so our understanding of what's dangerous is a little bit different."

The Sept. 16 operation ran into trouble from the start. As soon as the plane touched down in Kabul, Taliban officials announced that they would not allow evacuees to board without a written appeal from the Ukrainian government addressed to the "Islamic Emirate of Afghanistan."

The plane returned to Kyiv before heading back to Kabul on Sept. 19. There it sat while the team on the ground and officials in Ukraine conducted tense negotiations with an ever-changing cast of Taliban officials -- each claiming to be the person in charge.

"The biggest difficulty was that there was no hierarchical authority," said one of the Ukrainian officers involved in the operation, who like others spoke only on the condition that his name not be used. "Every person with some kind of a badge is certain that he knows what is best. It took so long to resolve every issue."

Even seemingly minor disagreements threatened to scuttle the entire mission. The Ukrainians had created a printed list of evacuees' names with each family highlighted in a different color. The Taliban refused to accept it, unexpectedly demanding that the printout be in black and white.

"And then it came to me," said a senior GUR officer. "They ban music; they ban art. And we send them a document printed in color, and they're like, what's with this pornography?" The printout was sent back in black and white.

For the Ukrainian team, the four days and nights they spent camped out on a chartered commercial airliner were slightly more comfortable than life on the front back home, though occasional and inexplicable bursts of gunfire in the vicinity of the plane rattled nerves.

For the evacuees, though, it was agony. For nearly a week, they arrived daily at 6 a.m., hoping to board the flight and waiting for up to 12 hours before leaving disappointed. Once, they made it all the way to the gate, boarding passes in hand, before being told no flight would be leaving.

One of the evacuees, a 36-year-old who refused to give his name because he had worked for the Afghan security services and studied in the United States, said Taliban officials had twice called to threaten him. He said he changed his location every 24 hours as a security precaution and was terrified he would be recognized each time he went to the airport hoping to board the Ukrainian flight.

"I put my life in danger and my relatives in danger," he said.

Ukrainian officers said the rescue mission nearly collapsed Wednesday evening, when security officials at the airport said the plane had to depart in 30 minutes, without the evacuees, or the aircraft would be commandeered.

Ukrainian officials would not provide details about exactly how they overcame the impasse, but they cited assistance from Turkey, Pakistan and Qatar as well as Wali Monawar, the ambassador to Ukraine from the previous Afghan government, who remains at his post in Kyiv.

The all-white jet carrying the Afghan evacuees touched down under a darkening sky in Kyiv on Thursday evening. The first to disembark were three young siblings, two girls and a boy, dressed in identical Disney hoodies. Red Cross workers were waiting at a closed terminal at Boryspil International Airport with tea and gold foil blankets to protect against the unseasonable cold. While some of the evacuees were Ukrainian citizens, primarily Afghans who had studied or worked in the country, many had never imagined ending up in such a place.

Nazir, 39, was a fine arts professor at Herat University who destroyed his gallery rather than letting it fall into the hands of the Taliban before fleeing with his wife and three children. He wore a large silver ring inlaid with black, green and red stones, Afghanistan's national colors.

"I left everything behind," he said. "My country, my land, my students, my family, my heart."

Nearly two dozen people on the Ukrainians' original list of evacuees remained in Afghanistan, mostly because they lacked valid travel documents when they showed up at the airport. In all, Ukraine has now evacuated more than 700 people, including journalists from The Wall Street Journal, Stars and Stripes and USA Today, said Andrii B. Yermak, the Ukrainian president's chief of staff.

"Ukraine will not leave its citizens or the citizens of other countries in danger," Yermak said.

The GUR leadership and other top Ukrainian officials plan to study the mission and determine how to make future runs to Kabul operate more smoothly. For now, Budanov said he was happy to have his people home safe.

At the airport Thursday night, after the Afghan refugees had been handed over to immigration officials, the general again gathered his team in a circle, pulled out a bottle of Jack Daniels and passed it around.