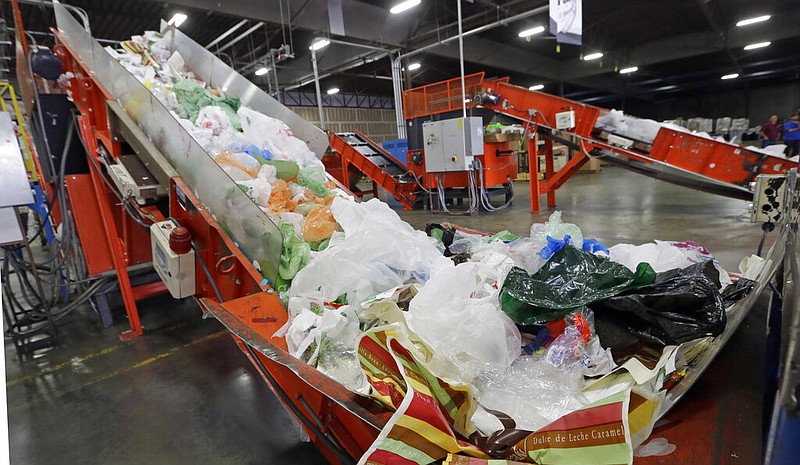 Conveyor belts carry mixed plastic into a device that will shred the plastics for recycling in a plant at Vernon, Calif., in this Jan. 24, 2014, file photo. (AP/Reed Saxon)

A federal judge dismissed a lawsuit Monday against Walmart Inc. that claimed the company misleadingly labeled some of its private-brand plastic products as recyclable.

Greenpeace said in its complaint that many customers who buy Walmart's private-label plastics, such as its Great Value cutlery and fruit cups, don't have access to recycling programs that accept them.

The group further stated that these items "cannot be separated or recovered from the general waste stream," and that "there are no end markets to reuse the products."

The items in question are single-use plastics with recycling labels of No. 3 through No. 7, according to court documents.

Greenpeace filed the suit in December in a California state court. It was later moved at Walmart's request to the U.S. District Court for the Northern District of California.

Walmart asked the court in April to dismiss the suit. It said Greenpeace lacked standing to file the suit under the provisions of the Business and Professions Code that it claimed Walmart had violated.

The Bentonville-based retailer said in its motion to dismiss that Greenpeace had not suffered any injury or lost money or property, or identified "even one person who was deceived" by Walmart's labeling practices.

In granting the motion, the judge agreed with Walmart's argument that Greenpeace failed to show it had standing to take its claims to court.

Greenpeace filed the suit "in response to its belief that the challenged statements were false," the judge said in her ruling. "In other words, Greenpeace was never misled."

The group has until Oct. 15 to file an amended complaint, the judge said in her ruling.