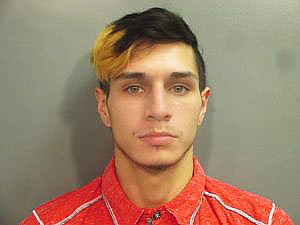 FAYETTEVILLE -- A man being held at the Washington County Detention Center was taken to a local hospital Wednesday after he attempted to hang himself in his cell, according to information from the Sheriff's office.

Nashoba Salazar was found in his cell just before 4 p.m. Wednesday by jailers doing a routine, hourly cell check. Chief Deputy Jay Cantrell said Salazar had tied one end of an article of clothing around a rail on the top bunk in the cell and tied the other end around his neck. Salazar was unresponsive when he was found, Cantrell said.

Cantrell said Salazar was in a one-man cell because the jail is required to segregate sex offenders from other detainees. Cantrell said the staff had no indications Salazar was suicidal and he was seen on video looking out of the cell door window about nine minutes before he was found during the cell check.

The Arkansas State Police have been asked to investigate the hanging, Cantrell said, and the Sheriff's office will conduct an internal review to determine if the jail's policies and procedures were followed.

Salazar's hanging is the second at the jail in little more than a year. On Sept. 5, 2020, jailers found Junior Ladtrik, 26, hanging from a bed rail in his cell. Ladtrik was pronounced dead at the scene.

According to information from the Sheriff's Office, Ladtrik was observed during a cell check around 8:10 p.m. on Sept. 5 and a deputy dispensing medications to detainees found him hanging in his cell at 8:35 p.m.

Ladtrik, 26, of Fayetteville, had been booked into the jail July 6, 2020, on a felony failure to appear warrant stemming from a Springdale Police Department arrest for breaking or entering, a felony, and two misdemeanor failure to appear charges, according to information from the Sheriff's Office. Ladtrik was being held on $75,000 bond. He had been moved to a single person cell on Aug. 15 after telling deputies he was afraid of some detainees in the jail pod he had been assigned to.