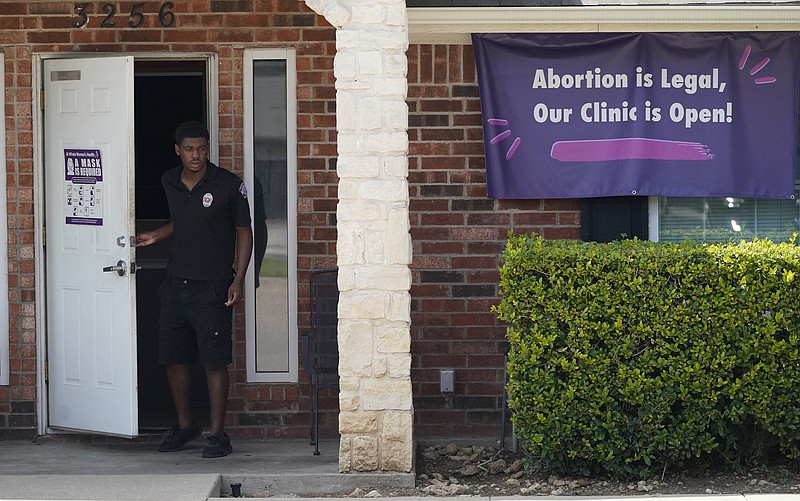 A security guard opens the door to the Whole Women’s Health Clinic in Fort Worth on Sept. 1. Video online at arkansasonline.com/916texas/. (AP)

AUSTIN, Texas -- Two weeks after the nation's strictest abortion law took effect in Texas, new court filings show the deepening impact a near-total ban on abortion is already having, as the Biden administration late Tuesday asked a federal court in Austin for an emergency order to temporarily halt enforcement of the measure known as Senate Bill 8.

"Since S.B. 8 took effect on September 1, exactly what we feared would happen has come to pass," Melaney Linton, president of Planned Parenthood Gulf Coast, said in a court filing.

The law prohibits abortions once medical professionals can detect cardiac activity, which is usually around six weeks -- before some women know they're pregnant. Enforcement is left up to private citizens who are deputized to file civil lawsuits against abortion providers, as well as others who help a woman obtain an abortion in Texas. U.S. District Judge Robert Pitman did not immediately take action Wednesday on the request by the Justice Department.

One Texas woman traveled nearly 1,000 miles to Colorado for an abortion. Others are driving four hours to New Mexico. And in Houston, clinics that typically perform more than 100 abortions in a week are are down to a few a day. One network of clinics in Texas said it has so far turned away more than 100 patients.

In the 10 days after the law took effect, Linton said, Planned Parenthood clinics in Houston had 63 patients scheduled for an abortion, far fewer than the roughly 25 they would normally perform in a single day alone. Eleven of those patients wound up being unable to have abortions because cardiac activity was detected during their appointment.

[Video not showing up above? Click here to watch » https://www.youtube.com/watch?v=rjgxroRPpbg]

One patient who was around five weeks pregnant had no cardiac activity but learned during her visit she had covid-19, meaning that after a mandatory quarantine she would be too far along in her pregnancy to have an abortion in Texas, according to Linton.

Fund Texas Choice, a nonprofit that for several years has paid transportation for Texas women unable to afford long travel costs for an abortion, told the court that the number of callers has shot up from about 10 per week to 10-15 daily. It estimates it will have spent at least $10,000 more than usual by October, and that donors have expressed fear of running afoul of the law if they give money to help patients get an abortion.

Abortion providers say they are complying with the law, and Texas Right to Life, the state's largest anti-abolition group that set up a tip line to receive alleged violations, has said it has received no credible reports that the law is not being followed.

"Texas Right to Life is not surprised by the Biden administration's desperate move to stop the Texas Heartbeat Act from saving lives by any means necessary and as quickly as possible. We expect an impartial court to declare the DOJ's lawsuit invalid," said Elizabeth Graham, the group's vice president.

A full accounting of the decline in Texas abortions -- and how many women are now seeking them elsewhere -- is not known. There were more than 19,000 abortions in Texas through April, according to the Texas Health and Human Services Commission. Abortion providers in neighboring and nearby states have expressed worry that with the new surge of Texas patients at their own clinics there is not enough capacity.