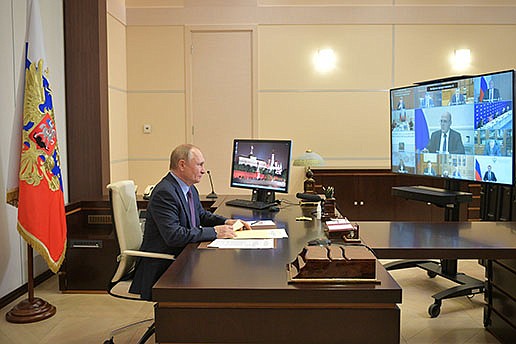 Russian President Vladimir Putin attends a meeting with members of Russian Government and heads of United Russia party via videoconference at the Novo-Ogaryovo residence outside Moscow, Russia, Tuesday, Sept. 14, 2021. Putin entered self-isolation after people in his inner circle became infected with the coronavirus, the Kremlin said Tuesday, adding that the leader himself tested negative for COVID-19. (Alexei Druzhinin, Sputnik, Kremlin Pool Photo via AP)

MOSCOW -- Russian President Vladimir Putin entered self-isolation after people in his inner circle became infected with the coronavirus, the Kremlin said Tuesday, adding that the leader himself tested negative for covid-19.

Putin, who is fully vaccinated with Russia's Sputnik V, held several public engagements indoors Monday and even said that he may have to quarantine soon. An aide at the time sought to suggest he was speaking generally and insisted Tuesday that no one's heath was endangered.

During a daily conference call with reporters, Kremlin spokesman Dmitry Peskov said that Putin, 68, is "absolutely healthy" but had come in contact with someone who contracted the virus. Asked if Putin tested negative for the virus, Peskov said "definitely, yes."

Peskov didn't say when Putin began self-isolating, when he tested negative, how long he would remain in self-isolation or who among the president's contacts was infected.

[Video not showing up above? Click here to watch » https://www.youtube.com/watch?v=tt4YFGsEqFw]

During a videoconference with government officials and members of the ruling United Russia party, Putin said that several people in his "immediate circle" were infected with the virus, including a staff member who he was in close contact with throughout Monday.

That staffer was vaccinated and recently got "revaccinated," Putin said, apparently referring to a third shot that Russia is offering people who were immunized more than six months ago.

Even the most highly effective coronavirus vaccines in use don't prevent all infections, but they reduce the risk of getting seriously sick or dying from covid-19.

Russian authorities have been regularly criticized for underplaying the pandemic and for rarely imposing measures to control it even in the face of infection surges.

Putin has hardly ever worn a mask publicly, though he appeared to work largely remotely and was rarely seen in public for a period before he was vaccinated.

Also Tuesday, Putin criticized the presence of foreign troops in Syria, saying they are there against the will of the Syrian government and are blocking the consolidation of the war-torn country.

Putin was referring to hundreds of U.S. troops stationed in eastern Syria and working with Kurdish-led fighters in battling militants of the Islamic State, as well as Turkish forces in northern Syria. Speaking during a rare meeting in Moscow on Monday night with his Syrian counterpart Bashar Assad, he said the presence of the foreigners is illegal because they don't have permission to be there from the United Nations or Syria's government.

Russia joined Syria's 10-year conflict in September 2015, when the Syrian military appeared close to collapse, and has since helped in tipping the balance of power in favor of Assad, whose forces now control much of the country. Hundreds of Russian troops are deployed across Syria and they also have a military air base along Syria's Mediterranean coast.

"This clearly violates international law and doesn't allow you to make maximum efforts to consolidate the country," Putin was quoted as telling Assad about the foreign forces, according to a statement released by the Kremlin.

"Only a consolidation of all forces in Syria will allow the country to get on its feet and start steady development, moving forward," Putin said.

Last week, a Russian-negotiated cease-fire deal went into effect to end a government siege and intense fighting in the southern city of Daraa. The deal brought areas held by the rebels in the city under government control for the first time since 2013.