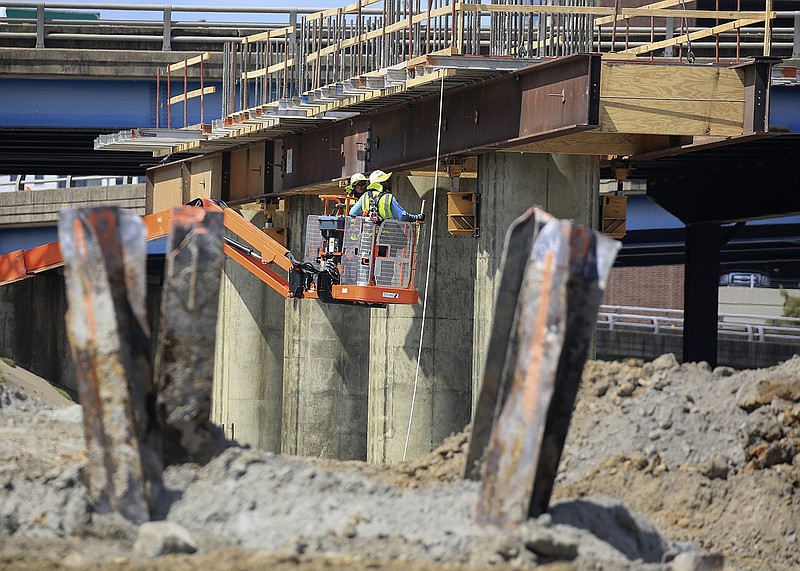 A Pulaski County circuit judge has rejected an Arkansas Department of Transportation request to reconsider the agency's earlier request to dismiss a challenge to the financing behind the $1 billion 30 Crossing project that is under construction on the Interstate 30 corridor through downtown Little Rock and North Little Rock.

The ruling was made six days after Circuit Judge Mackie Pierce heard arguments over whether the lawsuit before him was already adjudicated in a previous proceeding.

The request was denied in a two-sentence order issued Monday.

Last November, a group of plaintiffs led by the Little Rock Downtown Neighborhood Association sued the agency, the Arkansas Highway Commission and members of the state's executive branch, including Gov. Asa Hutchinson, seeking to halt the 30 Crossing project and another project that is widening a section of I-30 in Saline County.

The lawsuit was filed a month after the Arkansas Supreme Court ruled in a separate lawsuit that October that the wording in Amendment 91 to the Arkansas Constitution bars the 0.5% statewide sales tax collected under the amendment from being used on highways wider than four lanes.

Amendment 91, approved by voters in 2012, underpins the department's $1.8 billion Connecting Arkansas Program, an initiative that targets work on regionally significant projects, including 30 Crossing.

The latest lawsuit wanted the projects stopped until the department could "clearly demonstrate" that the projects could be "conducted and completed" in compliance with the Supreme Court ruling and until their case was decided at trial.

In December, Pierce refused to issue an injunction to stop work on 30 Crossing, ruling that the plaintiffs did not have evidence to justify halting construction.

The coalition filed an amended lawsuit in January to include nearly a dozen other road projects in which the coalition identified at least $780.4 million that it said had been illegally spent on the projects.

The amended complaint asked that the money be repaid to the Arkansas Four-Lane Highway Construction and Improvement Bond Account.

The Transportation Department and other defendants have sought to have the case dismissed, arguing in briefs and at a hearing earlier this year that the latest lawsuit was precluded from being heard because the matter already was decided by the Supreme Court's October decision.