Governor: Decision on federal vaccination order up to the courts 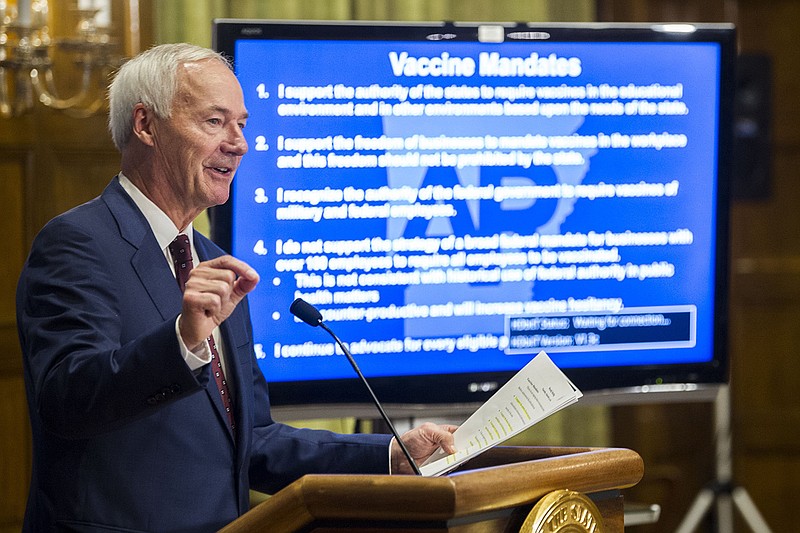 Governor Hutchinson addresses the media during a weekly address on the state's response to COVID-19 on Tuesday, Sept. 14, 2021 (Arkansas Democrat-Gazette/Stephen Swofford)

Gov. Asa Hutchinson said Tuesday that he would support efforts to overturn a forthcoming federal mandate for businesses with 100 or more employees to require that workers be vaccinated against the coronavirus or tested regularly.

"I think it's primarily a decision for the courts to make, and I would expect a very organized challenge to it from various attorney generals," Hutchinson said. "I would support that effort."

Arkansas Attorney General Leslie Rutledge, who tweeted last week that no one "should be forced to get the vaccine," indicated Tuesday that she plans to try to block the rule.

"I have already challenged President [Joe] Biden's many overreaching executive orders such as Greenhouse gases, Keystone Pipeline and the prohibition on offshore drilling and federal lands permits," Rutledge said in a statement.

"President Biden needs to lawyer up because I will see him in court as I vigorously defend Arkansans from his vaccine mandate."

Meanwhile, the number of people hospitalized with covid-19 in Arkansas fell for the seventh day in a row, reaching its lowest level since July 30.

[Video not showing up above? Click here to watch » https://www.youtube.com/watch?v=GiI2JU0xYBo]

The state's count of cases rose by 1,544, an increase that was more than twice as large as the one a week earlier, when the number of test results reported was lower than normal because of Labor Day.

Arkansas' death toll from the virus, as tracked by the Department of Health, rose by 36, to 7,334.

At his weekly news conference at the state Capitol, Hutchinson said he recognizes the authority of the federal government to mandate vaccines for the military and other federal employees.

But he said a broad mandate applying to businesses "is not consistent with historical use of federal authority in public health matters" and "will increase vaccine hesitancy."

"I should emphasize that I continue to advocate for everyone that is eligible to be vaccinated," Hutchinson said.

"That is the message, and this debate on mandates is a side attraction that withdraws, really, from the greater voice that we've had in encouraging vaccinations."

He said he supports the authority of states to require vaccines "in the educational environment and in other environments based upon the needs of the state." But he said "now is not the time" for such requirements in Arkansas.

Act 977, signed by Hutchinson in April, prohibits most state and local government entities, including public schools, from requiring vaccinations.

"Our strategy is the right one for now, which is to educate, is to encourage and to solicit the support of the communities to increase the vaccination rates, and that's been proven successful," Hutchinson said.

"I know everybody would like to see it go up at a quicker pace, but it's moving in that direction."

Hutchinson declined to say later Tuesday whether he supported a federal rule that will require vaccinations of workers at hospitals and other health care facilities that accept payments from Medicaid or Medicare.

The number of people hospitalized with covid-19 in Arkansas fell Tuesday by 16, to 1,097.

The number who were on ventilators dropped for the fourth straight day, going from 286 as of Monday to 281, its lowest level since Aug. 8.

The number who were in intensive care, which on Monday dropped below a peak it reached in January during the winter surge, fell Tuesday by 11, to 432, the fifth daily decline in a row.

Although it was down by more than 100 from the record high it reached in August, the number of covid-19 patients who were on ventilators Tuesday remained larger by 13 than the peak in January.

The number hospitalized was down from peaks of 1,459 last month and 1,371 in January.

Although health officials had expressed concern that gatherings over Labor Day weekend would lead to a spike in cases, such an uptick didn't appear to have materialized as of Tuesday.

"At this time, we're not seeing a dramatic increase," Health Secretary Jose Romero said, adding that some people could be using home kits to test themselves and not reporting the results to the Health Department.

He said he didn't know the reason for the state's downward trend in new cases over the past few weeks, but he said it was similar to what happened in the United Kingdom, where new cases surged this summer before declining and then rising again.

Vaccinations could be playing a role, he said.

"We're clearly not at a number of vaccinated individuals to stop spread, but there may be enough of the individuals who have some immunity after being infected that it's not transmitting as much as it was before," Romero said.

Recently, the pace of vaccinations has slowed.

The number of doses that providers reported having administered rose Tuesday by 6,771.

That was three times the size of the increase a week earlier, after the holiday weekend. Otherwise, it was the smallest daily increase on a Tuesday since July.

"I think people are seeing that the cases are going down," Romero said.

"They're feeling more confident, and they're not going in for the vaccines."

He said 34% of the doses reported Tuesday were first doses, and 57% were second doses.

The increase included some third doses of Pfizer and Moderna, which have been authorized for certain people with compromised immune systems.

Romero added that, compared with last year, he's worried that the flu season this year will be bigger and will start earlier in a way similar to how cases of respiratory syncytial virus spiked this summer.

"It's very important for people to understand that now is the time to get your shots," Romero said. "Don't wait until later, because you want to be immunized prior to the swing upwards."

The Hope School District on Monday announced that three campuses would shift to virtual learning for the rest of the week because of the number of students who were quarantined after being near infected people.

Key noted that the number of active cases among public school students and employees, as tracked in Health Department reports, fell by more than 1,300, to 3,517, from the start of last week to Monday, which he attributed to mask requirements and other precautions.

He noted that some districts that adopted the policies at the start of the school year planned to revisit them after 30 days.

"My message to those superintendents and to those school boards are: Let's keep doing what you've been doing," Key said. "It's been working."

The board of the Springdale School District, the state's largest district by enrollment, voted Tuesday to end its mask mandate, however.

Act 1002, passed by the Legislature during this year's session, barred schools and other state and local government entities from requiring people to wear masks, but Pulaski County Circuit Judge Tim Fox on Aug. 6 blocked the law from being enforced while a lawsuit challenging its constitutionality is pending.

Across the Little Rock School District, eight students and one employee tested positive for the virus during the 24-hour period ending at 3 p.m. Tuesday, the district reported.

An additional 36 students and one staff member were required to quarantine after being near infected people.

The average daily increase in the state's case count over a rolling seven-day period rose by 137, to 1,697.

That was still down from an average of 1,775 cases a day that were added the previous week and a recent high of 2,351 a day for the week ending Aug. 7.

With recoveries outpacing new cases, the number of cases in the state that were considered active fell by 737, to 17,084, the smallest number since July 28.

According to rankings on Tuesday by the U.S. Centers for Disease Control and Prevention, Arkansas had the country's 17th-highest number of new cases per capita in the seven-day span ending Monday, down from the 13th-highest the week ending Thursday.

Arkansas' number of new deaths per capita was the third-highest after Mississippi and Louisiana.

Hutchinson said 25 of the deaths reported Tuesday happened in September. Of the others, two were in August, seven were in July, and two were in June.

According to a chart he displayed at the news conference, 11.6% of the state's coronavirus tests were positive during the seven-day span ending Monday, down from a recent high of 16.3% the week ending Aug. 4.

Hutchinson has said he wants to keep the number below 10%.

The number of people who have ever been hospitalized with the virus in Arkansas rose Tuesday by 121, to 25,163.

The number who have ever been on a ventilator rose by eight, to 2,554.

According to the CDC, the number of Arkansans who had received at least one vaccine dose rose Tuesday by 997, to 1,648,498, representing about 54.6% of the population.

Nationally, 63.2% of people had received at least one dose, and 54% had been fully vaccinated.

Print Headline: Governor: Decision on federal vaccine order up to the courts