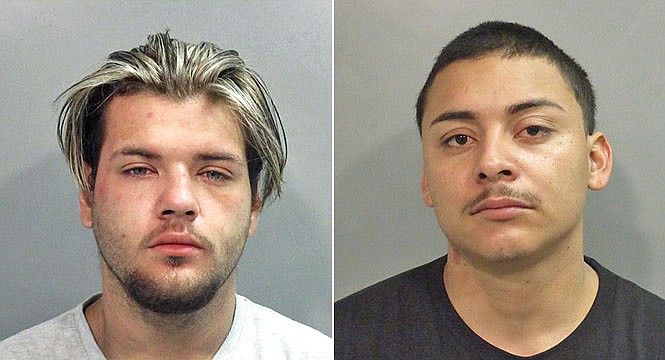 Mackenzie Lawhorn (left) and Damacio Tellez both arrested in connection with robbing and beating another man.

FAYETTEVILLE -- Two men have been arrested after police say they robbed and pistol-whipped another man before dumping him along the side of a road in Johnson.

Mackenzie Lawhorn, 19, of 1352 N. Caddo Ave. in Fayetteville was arrested Sunday in connection with aggravated robbery, kidnapping, theft of property, theft by receiving and engaging in violent criminal gang activity or enterprise. Lawhorn was being held Monday in the Washington County Detention Center with no bond set.

Damacio Tellez, 27, of 580 E. Randall Wobbe Lane in Springdale was arrested Monday in connection with aggravated robbery, theft of property and engaging in violent criminal group activity or enterprise. Tellez was being held on $50,000 bond in connection with failure to appear.

According to a preliminary report from Fayetteville police, Johnson police found a man on July 28 severely injured and stumbling along the side of a road in Johnson. The man, whose name wasn't released, was taken to Washington Regional Medical Center, where he was treated for several large lacerations and a concussion, police said.

The man told police he was robbed at a home in Fayetteville by several men who pistol-whipped him and hit him with the butt of an AR-style rifle. The men took about $7,000 and documents from the man, including his marriage license. After the man was beaten and robbed, he was put into the back seat of his car, driven to Johnson and dumped out, according to the report. The men then took the man's 2016 Nissan Murano.

Police said in the report the Nissan was found Aug. 3 abandoned in front of 726 W. Van Gogh Place in Fayetteville with extensive damage to the electronic systems. Several days later, according to the report, shots were fired into the home at 731 W. Van Gogh Place, one house west of the address where the car was found.