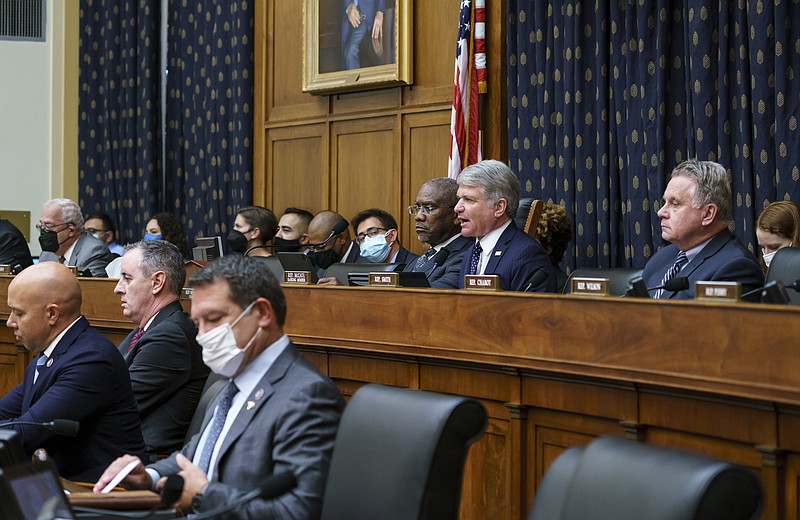 WASHINGTON -- Secretary of State Antony Blinken clashed with Republican lawmakers Monday over the handling of the chaotic withdrawal from Afghanistan in his first hearing before Congress since the Taliban's takeover of the country, saying the Biden administration inherited a deal to end the war, but no plan for carrying it out.

In a sometimes-contentious hearing Monday before the House Foreign Affairs Committee, Blinken sought to blunt complaints from angry GOP lawmakers about the administration's choice to end the evacuation before every American left the country, the sluggish pace of visa processing for Afghan allies, and other tactical decisions, such as the abandonment of its largest military base at Bagram airfield.

"I never thought in my lifetime that I would see an unconditional surrender to the Taliban," said Rep. Michael McCaul of Texas, the committee's top Republican. "The American people don't like to lose, especially to the terrorists."

"The majority of Americans wanted to leave Afghanistan, but not like this," added Rep. Steve Chabot, R-Ohio.

Blinken echoed White House talking points blaming the Trump administration for the situation that President Joe Biden inherited in Afghanistan. "We inherited a deadline. We did not inherit a plan," he said, maintaining that the administration had done the right thing in ending 20 years of war.

"We made the right decision in ending America's longest-running war," said Blinken, who will testify today before the Senate Foreign Relations Committee.

Republicans savaged the withdrawal process as "a disaster" and "a disgrace." And while some Democrats allowed that the operation could have been handled better, many used their questions to heap criticism on former President Donald Trump.

[Video not showing up above? Click here to watch » https://www.youtube.com/watch?v=r5NEBRyGY2I]

The State Department has come under heavy criticism from both sides for not doing enough and not acting quickly enough to get American citizens, legal residents and at-risk Afghans out of the country after the Taliban took control of Kabul on Aug. 15. Some seeking to leave remain stranded there, although Blinken could not provide an exact number. He said roughly 100 U.S. citizens remain along with "several thousand" green card holders.

"This was an unmitigated disaster of epic proportions," McCaul said. He said the abrupt withdrawal along with leaving some Americans and Afghans behind had "emboldened the Taliban" and other U.S. adversaries. "I can summarize this in one word: betrayal."

His GOP colleague Lee Zeldin of New York was even more blunt. "This was fatally flawed and poorly executed," said Zeldin. "I believe that you, sir, should resign. That would be leadership."

Rep. Joe Wilson, R-S.C., also called on Blinken to resign over the State Department's handling of the withdrawal.

Blinken, as he did with most other attacks, declined to respond to the specific allegations.

While declaring the Taliban takeover a humiliation, Republicans stopped short of advocating for a new surge of U.S. troops into the country -- an unpopular proposal that Blinken said would've been the only real alternative to withdrawing all personnel.

Rep. Gregory Meeks, D-N.Y., the committee's chairman, said Republican criticisms of the Biden administration were unrealistic and urged his colleagues to keep politics out of their criticism.

"Disentangling ourselves from the war in Afghanistan was never going to be easy," he said. "And for my friends who presume a clean solution for the withdrawal existed ... I've yet to hear the clean withdrawal option because I don't believe one exists."

But he acknowledged that there had been problems. "Could things have been done differently? Absolutely," he said.

Blinken tried to calmly deflect allegations of unpreparedness by noting that the Biden administration had inherited a U.S.-Taliban peace deal from its predecessor, along with a languishing program to grant visas to Afghans who had worked for the U.S. government.

In response to criticism that the State Department was slow to process visas for Afghan allies, or Special Immigrant Visas applicants, Blinken said he expanded the team of people working on those applications from 10 to 50 and surged consular officers to Afghanistan after the fall of Kabul. He also placed blame on the Trump administration for pausing interviews for Special Immigrant Visa applicants dating back to March 2020, a process Blinken resumed shortly after taking office.

Blinken, who had publicly predicted in June that a complete Taliban takeover would not happen in a matter of days, also tried to preempt criticism of the prediction by noting that no one in the U.S. government expected the Afghan government to fall as quickly as it did.

"Even the most pessimistic assessments did not predict that government forces in Kabul would collapse while U.S. forces remained," Blinken said in prepared remarks released ahead of his appearance. He also defended the evacuation effort, saying it succeeded despite near-insurmountable odds.

"The evacuation was an extraordinary effort -- under the most difficult conditions imaginable -- by our diplomats, military and intelligence professionals," he said. "In the end, we completed one of the biggest airlifts in history, with 124,000 people evacuated to safety."

But Republicans, in particular, have been demanding answers as to why American citizens were left behind in the chaotic days and weeks before the military completed its withdrawal on Aug. 30.

In a preview of GOP questions, the Republican National Committee released a statement earlier Monday with the banner headline "Fire Blinken," demanding that he be held to account for what it described as a litany of failings.

"Blinken's disastrous handling of Afghanistan and weak leadership put American lives in danger, including the lives of Americans still trapped in Afghanistan," the GOP committee said.

And some Republicans appeared to be spoiling for a fight with the generally unflappable Blinken. Rep. Bryan Mast of Florida accused Blinken of lying when he denied that intelligence had been manipulated to support Biden's desire to withdraw U.S. troops. "I do not believe a word you have said," he told Blinken.

In a rare show of temper, Blinken replied: "Simply put, what you said congressman, is dead wrong."

Blinken is very close to Biden, and his job as America's top diplomat is almost certainly safe, but criticism of the administration's handling of the Afghanistan withdrawal has not been limited to Republicans.

Numerous Democrats have also questioned the policy and expressed concern about stranded Americans, green card holders and Afghans who could face retaliation from the Taliban because of their work or ties to the U.S. government over the past 20 years.

State Department officials have acknowledged that the congressional hearings could be contentious and possibly ugly, but many remain convinced the U.S. military and other officials did the best they could under extremely trying circumstances -- including the evacuation of the U.S. Embassy in Kabul and the crush of thousands of desperate people at Kabul's airport seeking to leave the country.

Looking to the future, Blinken said a new pledge of $64 million in U.S. assistance to Afghanistan would circumvent the Taliban and go directly to nongovernment organizations and U.N. agencies providing relief to impoverished Afghans.

Blinken's aid pledge follows the freezing of billions of dollars in foreign donations to Afghanistan after the collapse of its Western-backed government -- a development that the U.N. says has caused chronic shortages in food and cash in a country where 18 million people, or half the population, were already dependent on foreign assistance.

The United Nations on Monday drummed up millions of dollars in emergency funds from donor countries for Afghans.

U.N. Secretary-General Antonio Guterres said more than $1 billion in aid pledges had been made at the meeting by the international community, which is still grappling with how to work with an organization like the Taliban.

The first such conference on Afghanistan since the Taliban took over a month ago is testing Western governments and other big traditional donors, which want to protect Afghans from looming humanitarian disaster but also want to keep pressure on the new militant rulers to respect rights and moderate their rule.

"The people of Afghanistan need a lifeline. After decades of war, suffering and insecurity, they face perhaps their most perilous hour," Guterres told the conference, adding that 1 in 3 Afghans do not know where they will get their next meal.

A severe drought is jeopardizing the upcoming harvest, he added, and hunger has been rising.

The U.N.'s World Food Program says Afghans are growing increasingly short of cash to buy food, the majority of which -- like wheat flour -- is imported.

"There is security now; we are happy about that," said Zakaria, a villager in Wardak province's Chak district and a former Taliban fighter who was serving a 16-year sentence in Pul-e-Charkhi Prison in Kabul when the Taliban seized power and freed inmates. "But there is no work; the people are not able to make any money," he added.

The price of flour doubled at the local market, Zakaria said. Villagers stopped cooking chicken and other meat -- now a luxury -- in favor of less expensive meals of beans and rice. Many started eating less, uncertain how they will pay for their next meal.

In the House hearing, Rep. Scott Perry, R-Pa., expressed concern about the aid getting into the hands of the Taliban. "How are you accounting for that?" he asked Blinken.

"As we do around the world in places of conflict, ... working through U.N., working through NGOs with long-tested methods," Blinken said. "This aid will not flow through the government."

Blinken touted efforts by the Biden administration to rally allies and partners behind a statement calling on the Taliban to "ensure freedom of travel; make good on its counterterrorism commitments; uphold the basic rights of the Afghan people, including women, girls, and minorities; name a broadly representative permanent government; and forswear reprisals."

"The legitimacy and support the Taliban seeks from the international community will depend on its conduct," Blinken said.

U.N. officials also suggested aid in the future could be impacted by how the Taliban rules.

"We need oral and written commitments made by the Taliban about operating rights of humanitarian agencies and the treatment and rights of minority groups, women and girls to be upheld," said Linda Thomas-Greenfield, the U.S. ambassador to the U.N. by video message. "Words are not good enough. We must see action. The international community is unified in this message."

Information for this article was contributed by Matthew Lee, Jamey Keaten, Munir Ahmed and Rahim Faiez of The Associated Press; by John Hudson and Missy Ryan of The Washington Post and by Marc Santora, Nick Cumming-Bruce and Christina Goldbaum of The New York Times. 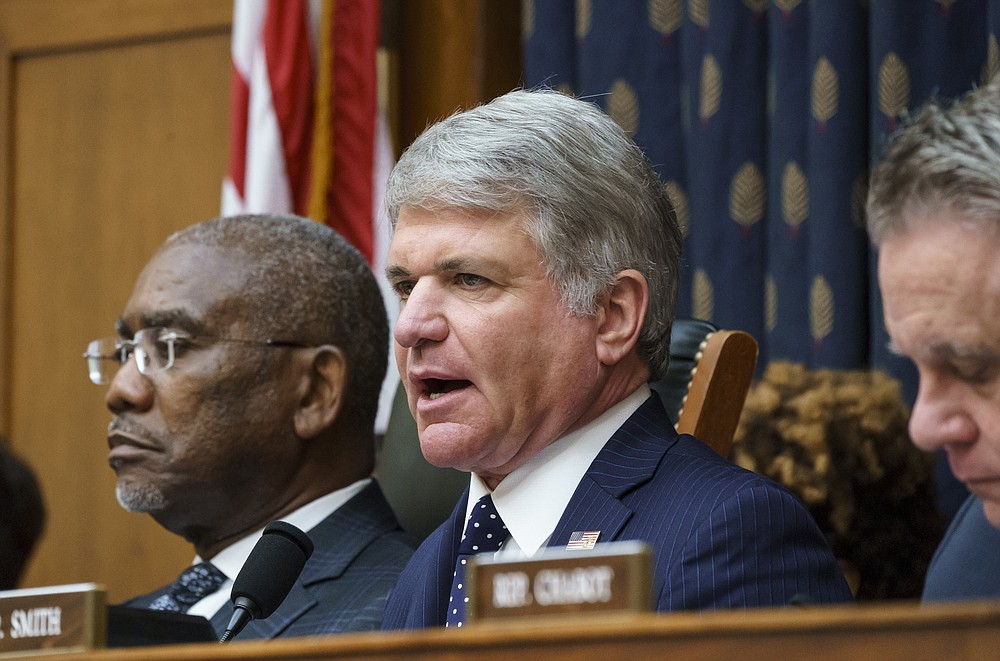 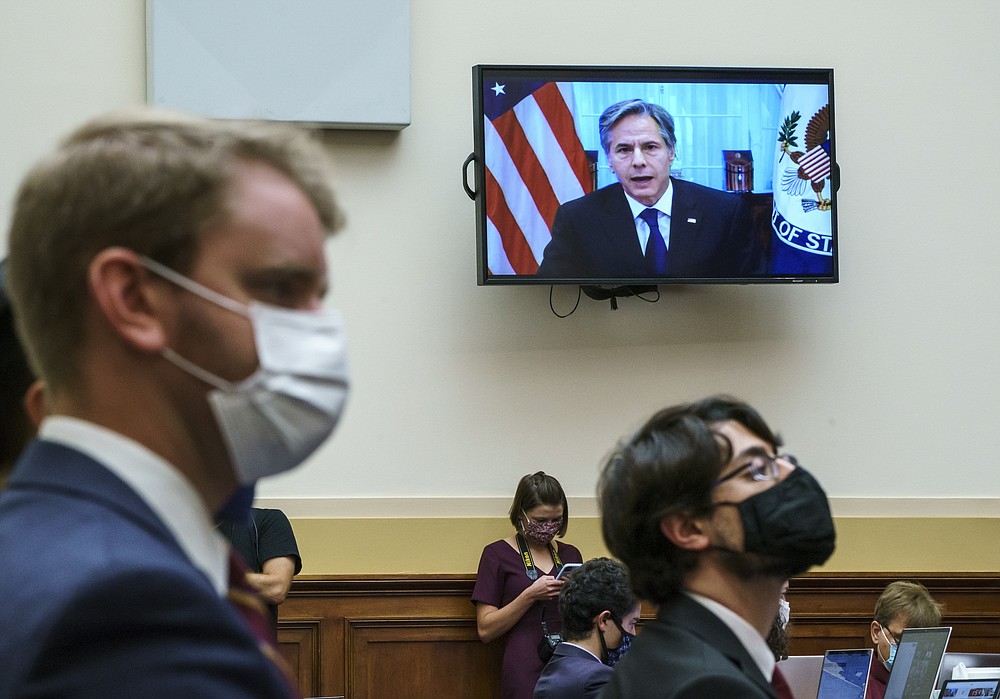 Secretary of State Antony Blinken appears remotely on a TV monitor to answer questions from the House Foreign Affairs Committee about the U.S. withdrawal from Afghanistan, at the Capitol in Washington, Monday, Sept. 13, 2021. (AP Photo/J. Scott Applewhite)