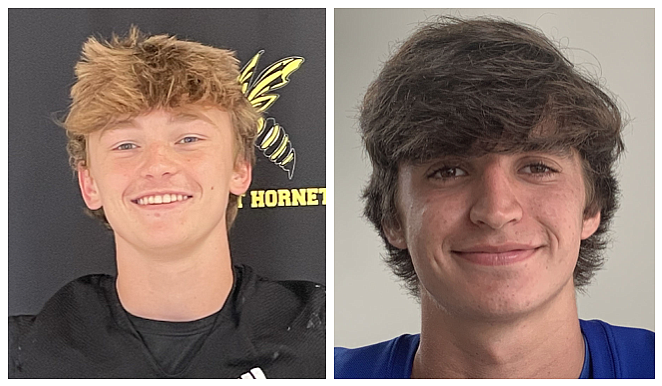 Panama kicked to him twice in the second quarter and its kickoff team couldn’t catch him.

Cole Ketchum, that is.

Ketchum returned kickoffs 77 and 75 yards for touchdowns to help Hackett to a 46-18 victory over Panama, Okla., in a non-conference game. But that wasn’t all the damage the Hackett sophomore inflicted on Panama, whose mascot is the Razorbacks. Ketchum also returned an interception 75 yards for a touchdown.

“Cole had an incredible game,” Hackett coach Michael Meador said. “He made three non-offensive touchdowns. I have never ever seen that. He has a bright future.”

Ketchum’s kick returns for touchdowns both came in the second quarter and he admitted to being surprised after he returned the first one 77 yards for a score.

“I was actually very surprised,” said Ketchum, who added four solo tackles and an assist while playing safety for the Hornets. “But they kicked it right to me. After that they started to onside kick.”

The win improved Hackett to 2-0 heading into this week’s game with Mountainburg.

Plumlee completed 24 of 38 passes for 316 yards to lead Harrison to a 35-31 win over Siloam Springs. Plumlee was particularly effective in the final two quarters to frustrate the Panthers, who held leads of 25-20 and 31-28 in the second half. The senior quarterback completed 12 of 15 for 177 yards and two touchdowns in the second half.

The win avenged Harrison’s 34-14 loss at Siloam Springs last year when the Goblins went 11-2 and advanced to the semifinals of the Class 5A state playoffs.

“Logan is a very smart player,” Harrison coach Joel Wells said. “He showed a lot of poise down the stretch to help our team win the football game. “

Harrison has a bye week before hosting Farmington on Sept. 24 to open 5A-West Conference play.