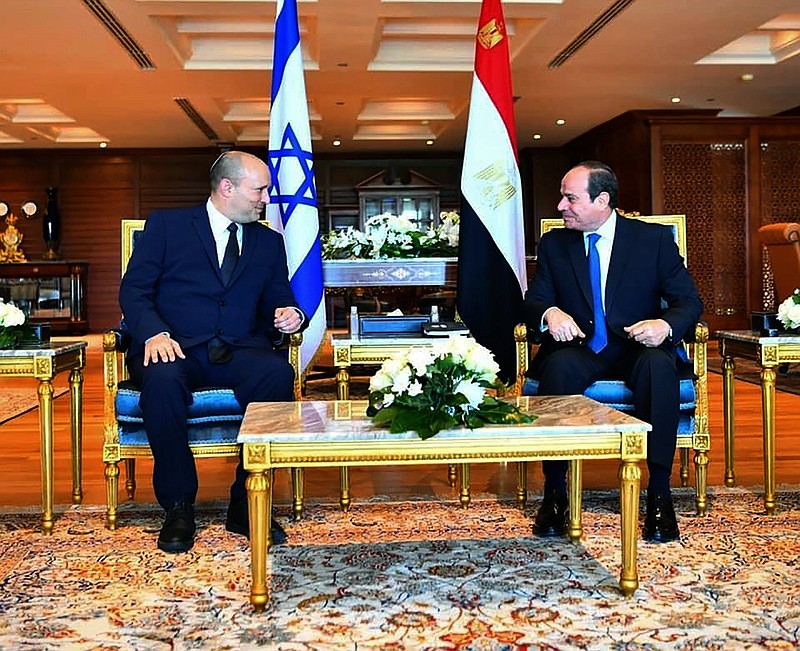 It was the first official visit by an Israeli premier since 2010, when then-President Hosni Mubarak hosted a summit with Benjamin Netanyahu, Palestinian President Mahmoud Abbas and U.S. Secretary of State Hillary Clinton. Less than a year later, a popular uprising toppled Mubarak.

Bennett and the Egyptian president discussed bilateral relations, reviving the Israel-Palestinian peace process and other regional and international developments, according a statement issued by el-Sissi's office.

The statement said el-Sissi stressed his support for "all efforts aimed at achieving a comprehensive peace based on a two-state solution."

The Israeli premier, in a statement following the meeting, thanked el-Sissi for Egypt's role in preserving security and stability in the Gaza Strip and its help with Israeli missing and captives from the conflict. He said the longstanding relationship between Egypt and Israel was a foundation for Israel's recent accords with other Arab nations.

Over nearly a decade, Israeli officials have held covert meetings with their Arab counterparts, some of which were only announced after the fact. In 1979, Egypt was the first Arab country to reach a peace agreement with Israel.

The meeting was a boost for Bennett, who took office in June and is still trying to establish his foreign-policy credentials. His predecessor, Netanyahu, billed himself as a global statesman but never was able to hold a public meeting with the Egyptian president.

Saeed Okasha, a political analyst with Al Ahram Center for Political and Strategic Studies, said that a more public meeting between el-Sissi and Netanyahu was not conceivable given the latter's "anti-Palestinian" policies.

"However, there are no grudges between Egypt and Bennett. Egypt is willing to listen to a new Israeli voice, especially in light of regional tensions," he said.

Egypt and Israel have often found themselves on the same side of a wider regional conflict with rivals Iran and sometimes Turkey.

Israel, with Egypt's help, has maintained a tight blockade over Gaza since the Palestinian militant group Hamas took control of territory in 2007 in an effort to prevent it from importing weapons. Israel and Hamas have clashed four times, most recently in May, and Egypt often serves as a mediator between the two enemies. In the last conflict, it successfully brokered a cease-fire that brought the fighting largely to a stop.

Egypt has been trying to broker a long-term cease-fire between Israel and Hamas, but those efforts appear to have run into trouble in recent weeks. Hamas has demanded a lifting of the blockade, which has devastated Gaza's economy. Israel wants Hamas to free two captive Israeli civilians and to return the remains of two dead soldiers killed in a 2014 war.

In recent weeks, Hamas has staged a number of violent demonstrations along the Israeli border and launched dozens of incendiary balloons across the frontier, setting off a series of wildfires in southern Israel.

Earlier this month, el-Sissi held talks with King Abdullah II of Jordan and Abbas in Cairo, where they stressed the need to revive the elusive two-state solution to the Palestinian-Israeli conflict. The three leaders said the Palestinians have a right to an independent state, with east Jerusalem as its capital, a plan that Israel staunchly opposes.

Information for this article was contributed by Ilan Ben Zion and Joe Federman of The Associated Press.