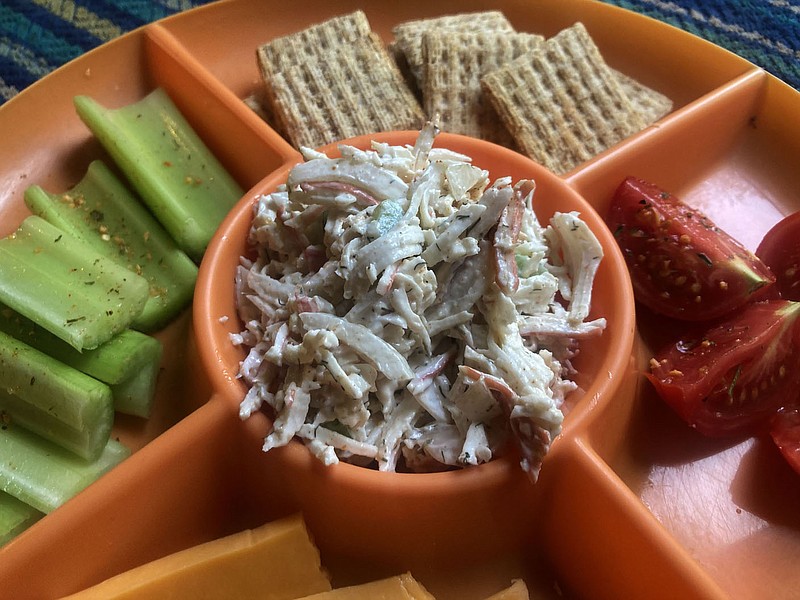 Seafood salad makes a great appetizer at a fish fry or any gathering. It's tasty and easy to make with only six ingredients. (NWA Democrat-Gazette/Flip Putthoff)

Let's say you're having the gang over for a fish fry before summer ends and thoughts turn toward hunting seasons.

You'll want to put some appetizers out on the table for your guests while that oil is getting nice and hot, and you're breading those walleye or crappie filets. Here at the shack-ri-la, some crackers, veggies and delicious home-made seafood salad are a home-run hit.

Dip a cracker in that yummy seafood salad or spread it on a celery stick and you've got a tasty snack. Back in the day, we'd buy our seafood salad at the grocery store and it's mighty tasty. Trouble is, it costs a pretty penny for a container not much larger than a tuna can. That paltry amount can vanish in three or four cracker dips.

For the same amount of cash, about five bucks, you can whip up four times that amount of seafood salad right in your own kitchen in about 10 minutes. It's easy and only takes six ingredients, eight if you add a couple of options. Your gang is going to love it. Here's what you'll need:

In a large bowl, break up the crab flakes until they're, well, flaky, then add all the other ingredients. Stir the whole thing with a fork until everything is mixed well.

Now you've got enough seafood salad to keep your gang snacking away until that fish is fried to golden-brown perfection. Leftover seafood salad, if there is any, keeps well in the refrigerator.

Nothing we like better at the shack-ri-la than tweaking a perfectly good recipe. Here's a couple ideas that we think make this seafood salad even tastier. With the mayo, use a little less than one-half cup but add a squeeze of tartar sauce and a dab or two of ranch dressing to make one-half cup.

Or, add a little Miracle Whip to the mayo instead of the tartar sauce and dressing. Whatever sounds good, give it a shot. We've tried a bit of mustard, but it turns the seafood salad yellow and it doesn't look as appealing.

Here at the shack, we've done away with the optional salt and pepper, and we don't always have dill weed in the spice rack. Lately, we've upped the amount of Old Bay to about three-fourths of a teaspoon just because we like Old Bay.

Could be you'll love seafood salad so much you'll try it as a sandwich and not just an appetizer. Spread it on a slice of bread or flour tortilla the same way you'd fix a tuna salad or chicken salad sandwich.