But Afghan universities will be segregated by Compiled Democrat-Gazette Staff From Wire Reports | September 13, 2021 at 6:56 a.m. 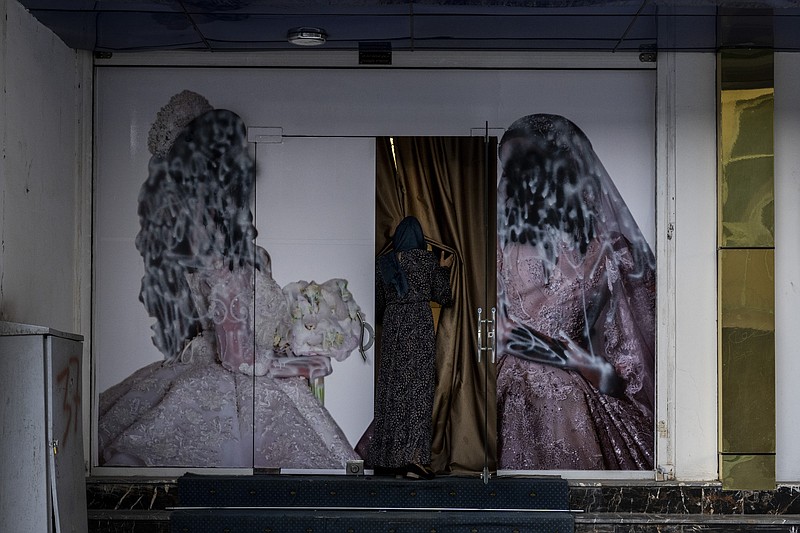 An Afghan woman enters a beauty salon in Kabul, Afghanistan, Saturday, Sept. 11, 2021. Since the Taliban gained control of Kabul, several images depicting women outside beauty salons have been removed or covered up. (AP Photo/Bernat Armangue)

KABUL, Afghanistan -- Women in Afghanistan will be allowed to study in universities and postgraduate programs but only in gender-segregated classrooms and in Islamic dress, the Taliban's new higher education minister announced Sunday as the militant group began to articulate its vision for the country after forming an all-male interim Cabinet.

The announcement came as a Taliban official said Qatar's foreign minister had arrived in the Afghan capital, Kabul -- the highest-level visitor since the Taliban announced their interim Cabinet. There was no immediate confirmation of the visit by Qatari officials.

The higher education minister, Abdul Baqi Haqqani, laid out the new policies at a news conference Sunday, several days after Afghanistan's new rulers formed the all-male government. On Saturday, the Taliban raised their flag over the presidential palace, signaling the start of the work of the new government.

The world has been watching closely to see to what extent the Taliban might act differently from their first time in power, in the late 1990s. During that era, girls and women were denied education and were excluded from public life.

The Taliban have suggested they have changed, including in their attitudes toward women. However, women have been banned from sports, and the Taliban have used violence in recent days against female protesters demanding equal rights.

Haqqani said the Taliban did not want to turn the clock back 20 years. "We will start building on what exists today," he said.

However, female university students will face restrictions, including a dress code. Haqqani said hijabs will be mandatory but did not specify if this meant compulsory headscarves or also compulsory face coverings.

Gender segregation will be enforced, he said.

"We will not allow female and male students to study in one classroom," Haqqani said. "Co-education is in opposition to sharia law."

In most circumstances, he said, women should be taught only by female teachers, but in the event of a shortage of lecturers, male instructors could teach women from behind a curtain or via video call.

"We will provide classrooms with a video screen," he said.

Haqqani said the subjects being taught would also be reviewed. While he did not elaborate, he said he wanted graduates of Afghanistan's universities to be competitive with university graduates in the region and in the rest of the world.

Farzana Sarwari, 21, who is studying at both a private university and at Kabul University, likened segregation to a pandemic. "It will spread to other parts of the society as well," she said.

Mohammad Nasir Habibi, a lecturer of psychology at Kabul University, said it was unrealistic that the university would be able to provide women with adequate educations under the new Taliban rules. Almost 90% of the lecturers at his university are men, he said, and it would be difficult to find lecturers who would be allowed to teach women.

The entire environment at the university has become "terrorized," Habibi said. "Already, many of my students and colleagues say that they do not want come to the university."

Sarwari said that when private universities reopened last week, she returned to find a classroom with a divider to separate men from women. She said only seven of the class's 42 students -- four women and three men -- showed up.

Sarwari said she, too, will stay away.

"I don't feel safe to go to university," she said. "There is no hope for our educational journey anymore."

The Taliban, who subscribe to a strict interpretation of Islam, banned music and art during their previous time in power. This time around, television has remained, and news channels still show female presenters, but the Taliban messaging has been erratic.

The Taliban dismissed women from government ministries shortly after seizing Kabul on Aug. 15, saying the work was not appropriate for female employees. While the Taliban have not ruled out the eventual participation of women in government, the spokesman said that "it's not necessary that women be in the Cabinet."

The Taliban initially promised inclusiveness and a general amnesty for their former opponents, but many Afghans remain deeply fearful of the new rulers. Taliban police officials have beaten Afghan journalists, violently dispersed women's protests and formed an all-male government despite saying initially that they would invite broader representation.

Women in the past week have led protests in several major cities to demand they be allowed to keep their government jobs, only to have their demonstrations broken up forcibly by Taliban fighters patrolling the streets. Journalists covering an unapproved women's march in Kabul were detained and whipped.

Meanwhile, pro-Taliban women held a countermarch, and a group wearing niqabs -- a conservative veil showing only their eyes -- sat in a Kabul University lecture hall on Saturday to hear speakers decry the liberal women who protested earlier in the week.

The new higher education policy signals a change from the accepted practice before the Taliban takeover. Universities were co-ed, with men and women studying side by side, and female students did not have to abide by a dress code. However, the vast majority of female university students opted to wear headscarves in line with tradition.

In elementary and high schools, boys and girls were taught separately, even before the Taliban came to power. In high schools, girls had to wear tunics reaching to their knees and white headscarves; jeans, makeup and jewelry were not permitted.

Much of the international community has yet to recognize the new government, making Al-Thani the most senior foreign official to visit Afghanistan since the Taliban's takeover.

"This visit is very important for us," Taliban spokesman Bilal Karimi said. "We hope the rest of the world follows suit."

The Taliban have maintained a political office in the Qatar capital, Doha, since 2013. Last week, Qatar Airways became the first international airline to begin operating international flights out of Kabul airport, transporting more than 250 foreign nationals, including U.S. citizens, out of the capital.

Qatar, along with Turkey, has provided technical assistance to restart the airport, which had been damaged by U.S. troops who left Afghanistan on Aug. 30 after evacuating tens of thousands of Afghans fleeing the Taliban.

Elsewhere, two Afghan employees of the Japan International Cooperation Agency and their families traveled overland out of Afghanistan and have arrived in neighboring Pakistan, Japanese newspaper The Yomiuri Shimbun has learned.

About 500 local employees of the Japanese Embassy and the Japan International Cooperation Agency have been left behind in Afghanistan, and it is believed that the two families are the first to be able to leave the country.

According to sources, the two families entered Pakistan on their own around Thursday. They were to leave Islamabad on Saturday on a commercial flight to Japan via Qatar. Pakistan appears to have assisted in the evacuation. According to an official, Interior Minister Sheikh Ahmad told Japanese officials on Sept. 1 that the government plans to allow the Afghan staff members to enter Pakistan.

Adding to questions about the country's future, the Taliban government faces enormous economic challenges, with near-daily warnings of an impending economic meltdown and a humanitarian crisis. The United Nations warns that the crisis could drive 97% of Afghans below the poverty level by the end of the year.

Thousands of desperate Afghans wait outside banks for hours each day to withdraw the $200 weekly allotment. In recent days, the Taliban appear to have been trying to establish a system for allowing customers to withdraw funds, but it rapidly deteriorates into chaos as crowds surge toward the bank gates.

For Zaidullah Mashwani, Sunday was the third day he had gone to the bank hoping to get his $200. Each night, the Taliban make a list of eligible customers for the following day, and by morning, Mashwani said, a whole new list is presented.

"This is our money. The people have the right to have it," he said. "No one has money. The Taliban government needs to do something so we can get our money."

The health care system in Afghanistan is also teetering on the edge of collapse, endangering the lives of millions and compounding a deepening humanitarian crisis, public health experts warn.

The country's health care has been propped up by aid from international donors. But after the Taliban seized power, the World Bank and other organizations froze $600 million in health care aid. The Biden administration, too, is struggling with how to dispense donor money to a country now being run by several senior Taliban leaders whom the U.S. has designated as terrorists.

If World Bank funding is not restored quickly, then an exodus of health care workers may result. Many have remained on the job despite significant personal risks; already, some have not been paid for months. Along with the loss of supplies, the cutoff would effectively end health care services in 31 of the nation's 34 provinces, humanitarian groups say.

Afghanistan is already on the brink of universal poverty, according to a United Nations report Thursday, and only its richest citizens will be able to afford health care. Assuming that health care coverage is cut by half because of the funding loss, deaths among women and children will increase by at least 33% over the next year, according to one analysis.

"We are losing personnel. We are losing lives and the morale and momentum we had," said Dr. Wahid Majrooh, who was health minister under the previous government and who has stayed on. "The crisis is very, very extensive."

Information for this article was contributed by Kathy Gannon of The Associated Press; by Ezzatullah Mehrdad, Gerry Shih and Miriam Berger of The Washington Post; and by Apoorva Mandavilli of The New York Times. 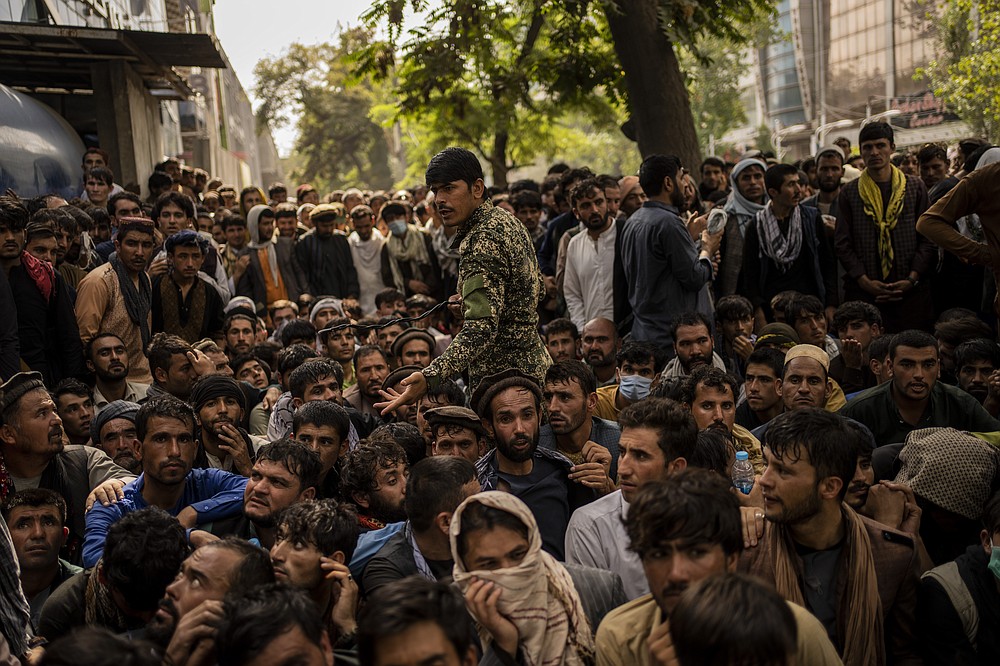 Afghans wait in front of a bank branch as they try to withdraw money in Kabul, Afghanistan, Sunday, Sept. 12, 2021. (AP Photo/Bernat Armangue) 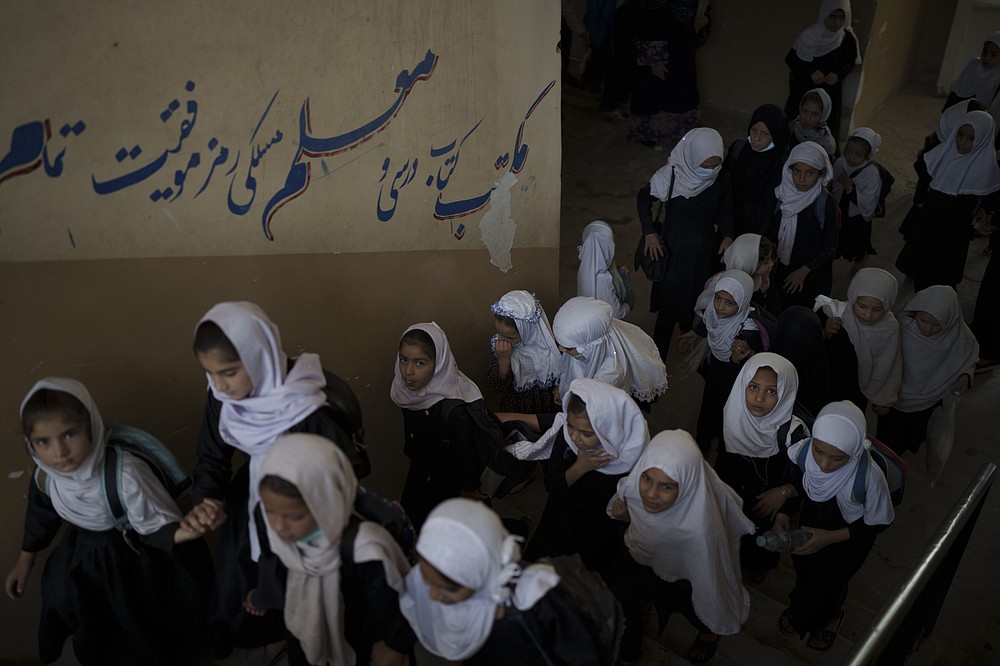 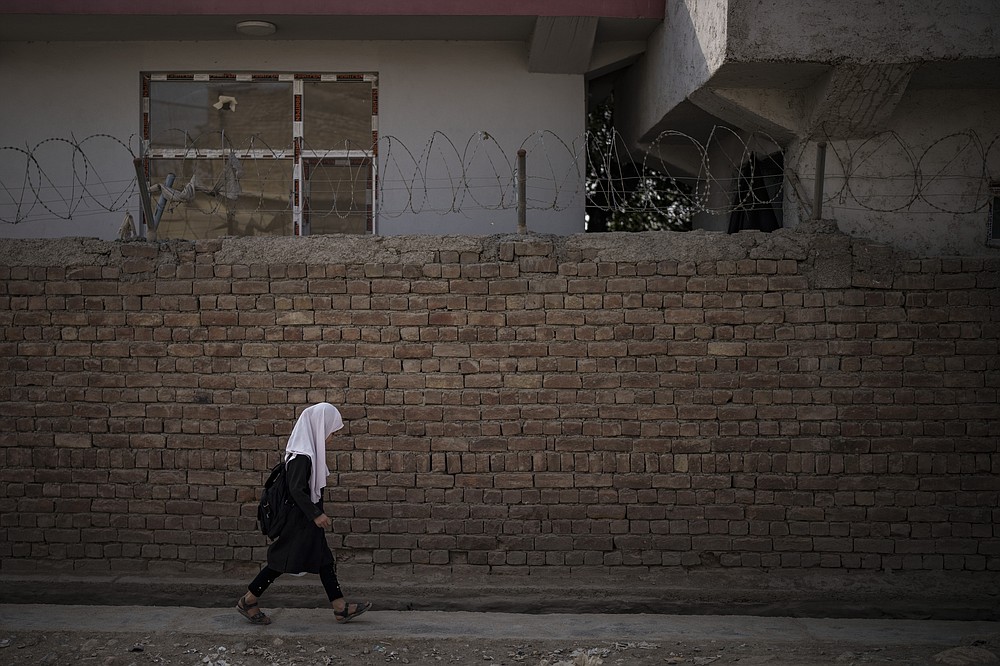 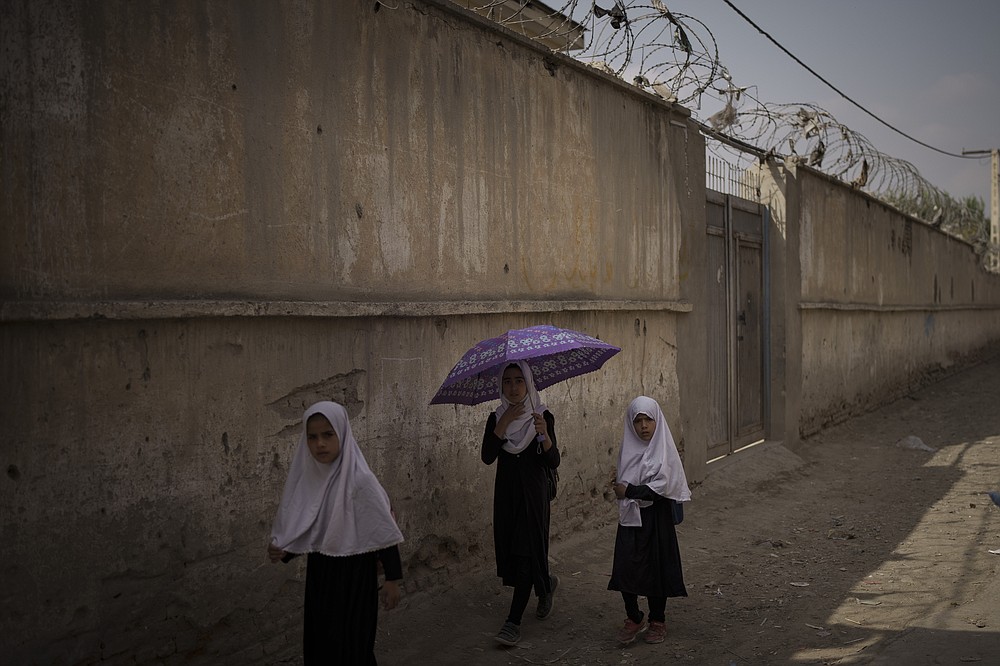 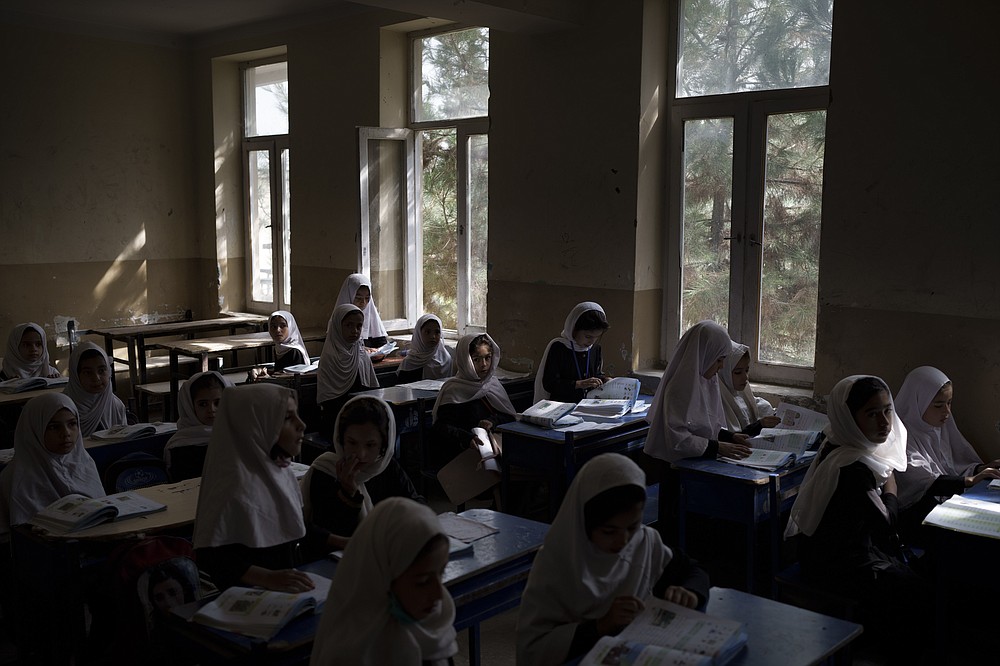 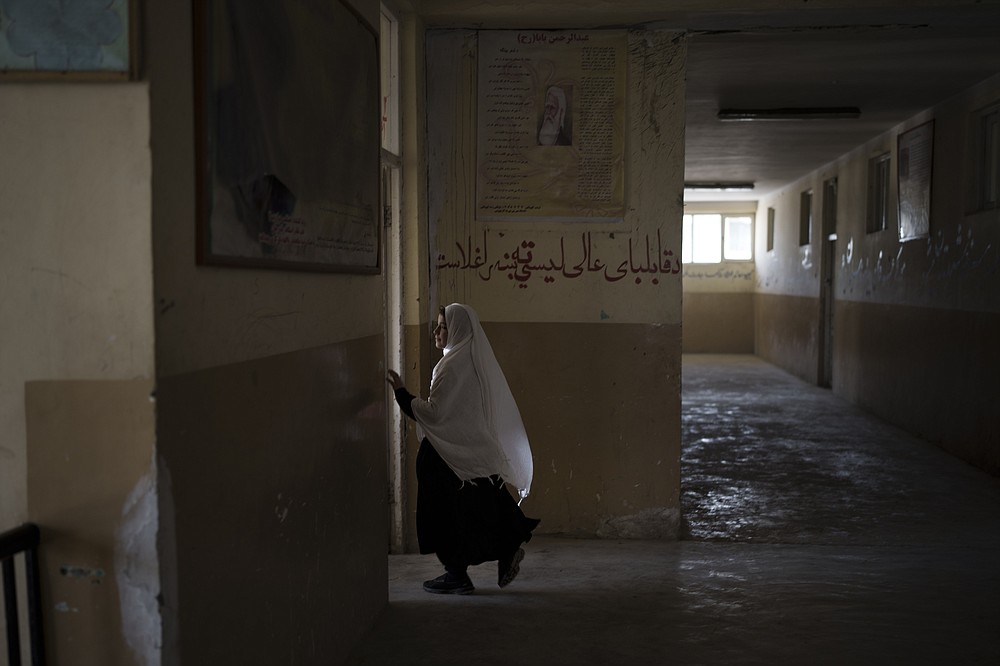 A girl walks into her classroom at a school in Kabul, Afghanistan, Sunday, Sept. 12, 2021. (AP Photo/Felipe Dana) 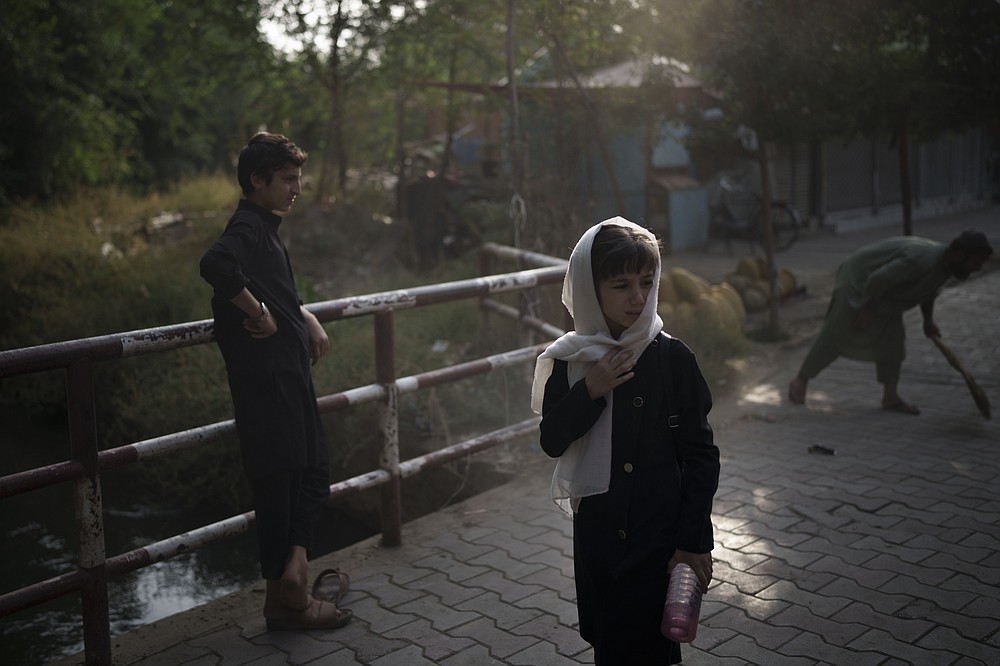 A girl waits for her friends as they walk to school in Kabul, Afghanistan, Sunday, Sept. 12, 2021. (AP Photo/Felipe Dana) 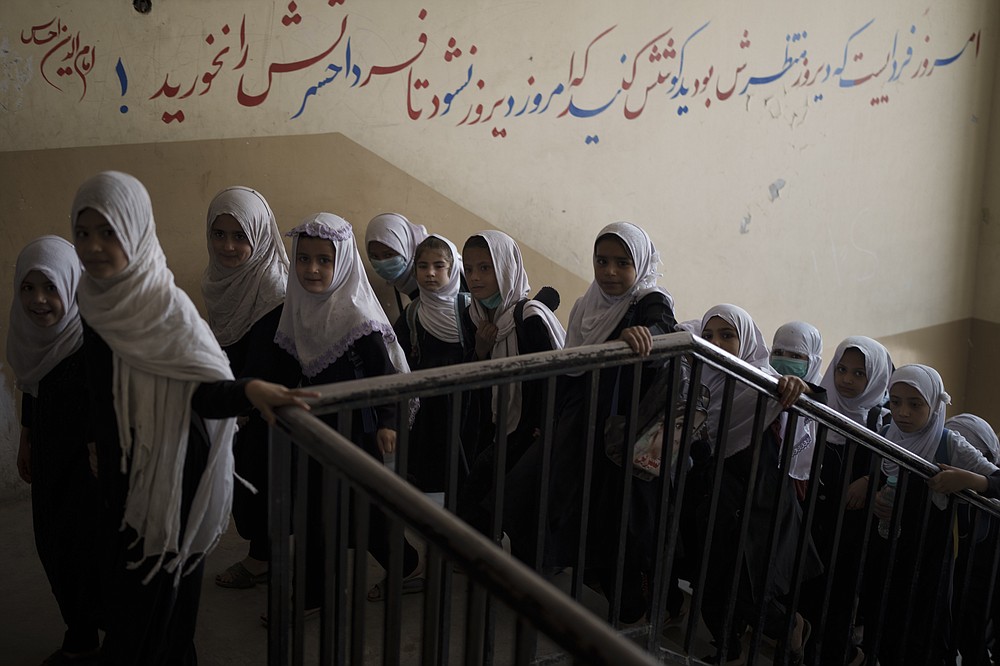 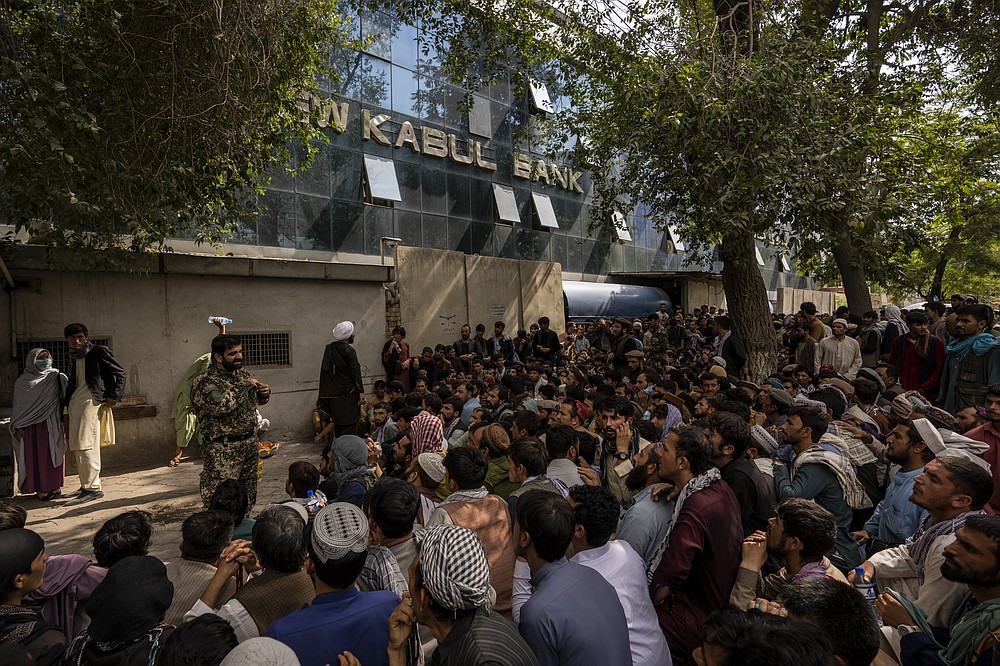 Afghans wait in front of a bank as they try to withdraw money in Kabul, Afghanistan, Sunday, Sept. 12, 2021. (AP Photo/Bernat Armangue)