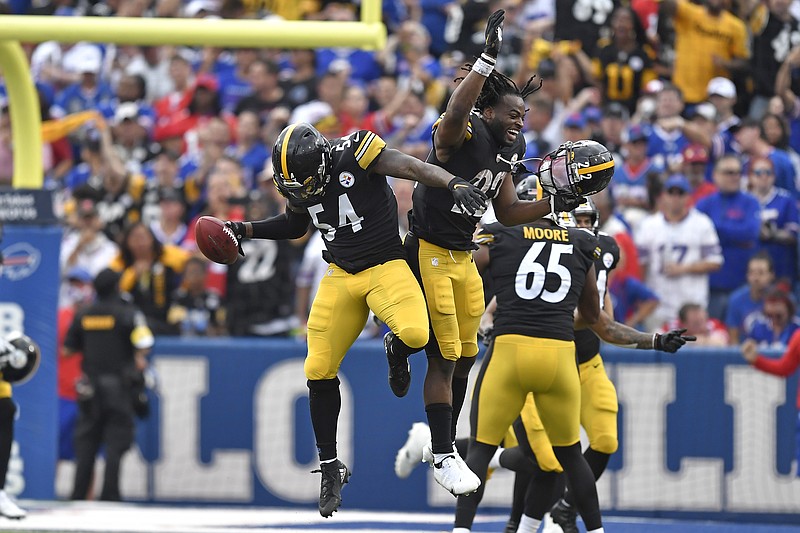 Pittsburgh Steelers linebacker Ulysees Gilbert (54) celebrates with running back Najee Harris (22) after returning a blocked punt for a touchdown during the second half of an NFL football game against the Buffalo Bills in Orchard Park, N.Y., Sunday, Sept. 12, 2021. (AP Photo/Adrian Kraus)

ORCHARD PARK, N.Y. -- Knowing it was going to take the Steelers' new-look offense time to find its footing, Ben Roethlisberger was counting on Pittsburgh's defense to keep the score close.

T.J. Watt and company delivered, with Pittsburgh getting the added bonus from its special teams in rallying from a 10-0 deficit to pull out a 23-16 season-opening win over the Buffalo Bills on Sunday.

"We anticipate that a little bit, right? The bumps in the road the offense is going to have, the newness," Roethlisberger said of an offense featuring a new coordinator, a retooled line and rookie running back Najee Harris. "We expect our defense to have to carry us. I told them that afterward, we appreciated their efforts, appreciated what they do, not losing faith in us."

Watt had two sacks and a forced fumble in his first game after signing a four-year, $112 million contract extension that made him the NFL's top-paid defensive player. And the defense kept the Bills' dynamic Josh Allen-led passing attack in check by stopping Buffalo on fourth down on each of its first two possessions of the second half.

"I don't want to say a dominant performance because obviously there's still a lot left on the table," Watt said. "But I'm very happy with where we are, especially Week 1."

After managing three first downs and 53 yards through two quarters, Roethlisberger got to work in the second half by leading the Steelers to a score on each of their first four possessions.

In cutting Buffalo's lead to 10-6 on a pair of Chris Boswell field goals, the Steelers went ahead on Roethlisberger's 5-yard touchdown pass to Diontae Johnson in the left corner of the end zone. The pass initially went off Johnson's fingertips, but the receiver was able to secure the ball before tumbling out of bounds 3:41 into the fourth quarter.

The Steelers then extended their lead to 20-10 some 90 seconds later with Miles Killebrew bursting up the middle to block Matt Haack's punt, and Ulysees Gilbert scooping up the loose ball at the Buffalo 9 and running it in untouched.

"I'm proud of the guys because they didn't blink," Roethlisberger said. "They they stood up in the face of not playing well early."

What was supposed to be Buffalo's coming out party following a breakthrough season in which the Bills won their first AFC East title since 1995 and made their first AFC championship game appearance in 27 years turned into a dud for a team pegged by many this offseason as a Super Bowl contender.

"Obviously, it's not what we hope for, what we strive for, how we want to start the season," said Allen, who finished 30 of 51 for 270 yards, was sacked three times and lost a fumble.

"Whether it be first-game nerves or jitters, or feeling stuff with my feet, but I've got to play better," Allen added. "We're not going to panic. It's 16 games left."

The momentum turned with Buffalo's second failed fourth-down attempt. Facing fourth and 1 at the Steelers 41, Allen turned around and threw an overhand pass to Matt Breida, who was immediately tackled for a 7-yard loss by cornerback Cameron Sutton.

Roethlisberger capped a five-play drive with the touchdown to Johnson. Gilbert scored when the Bills were forced to punt following a three-and-out in which James Pierre punched the ball out of the arms of Emmanuel Sanders to prevent a 20-yard catch on second down, and Watt followed by sacking Allen for a 6-yard loss.

Watt's teammates were not surprised by the impact he made despite limited practice time.

"You just see how hungry he was to come out here and continue to showcase the things that he's been putting on," Sutton said.

"Were you surprised? Me either," Roethlisberger said, answering his own question when asked about Watt's production. "I don't think anybody else was. It just shows that the preseason is overrated right?"

In opening his 18th -- and perhaps final -- season, Roethlisberger posted his 36th career fourth-quarter comeback to tie Drew Brees for third on the NFL list. He finished 18 of 32 for 188 yards and a touchdown. 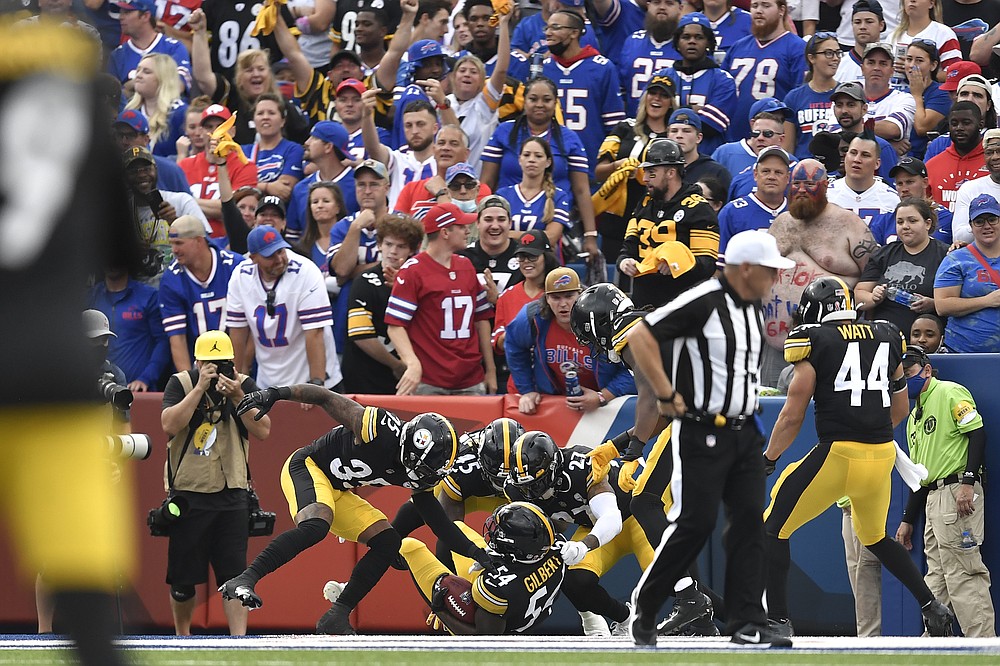 Pittsburgh Steelers linebacker Ulysees Gilbert (54) celebrates with teammates as he lies in the end zone after returning a blocked punt for a touchdown during the second half of an NFL football game against the Buffalo Bills in Orchard Park, N.Y., Sunday, Sept. 12, 2021. (AP Photo/Adrian Kraus) 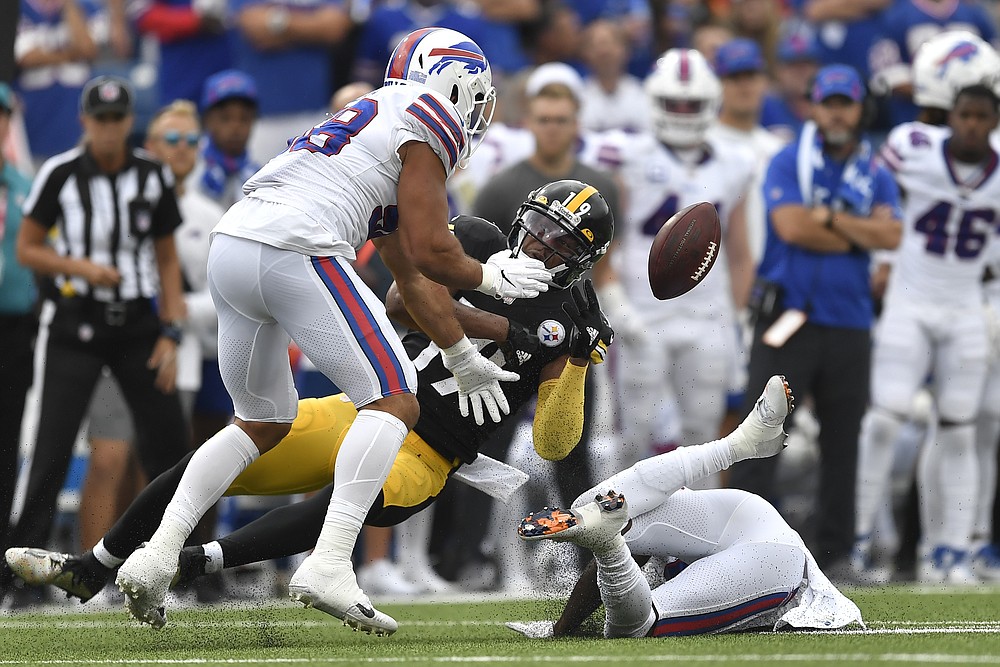 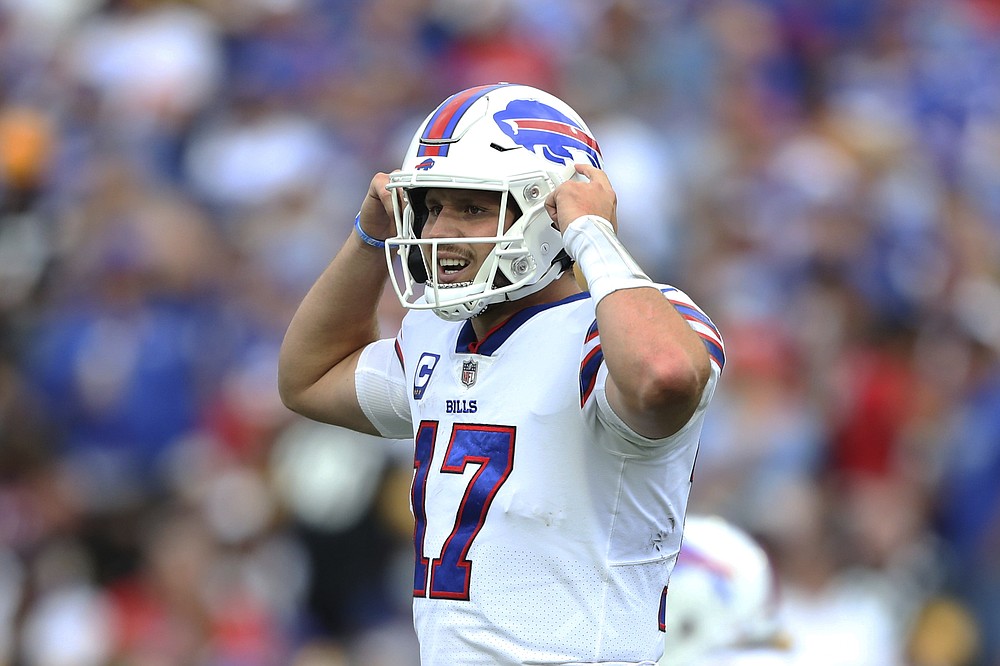 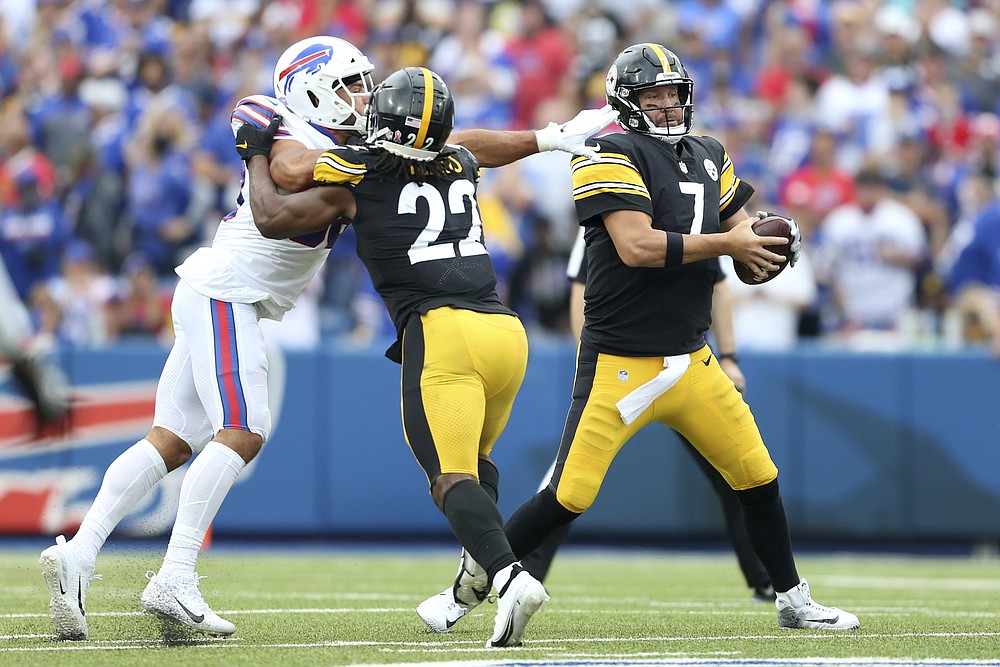 Pittsburgh Steelers quarterback Ben Roethlisberger (7) moves out of the reach of Buffalo Bills outside linebacker Matt Milano, left, with blocking by Najee Harris (22) during the second half of an NFL football game in Orchard Park, N.Y., Sunday, Sept. 12, 2021. (AP Photo/Joshua Bessex) 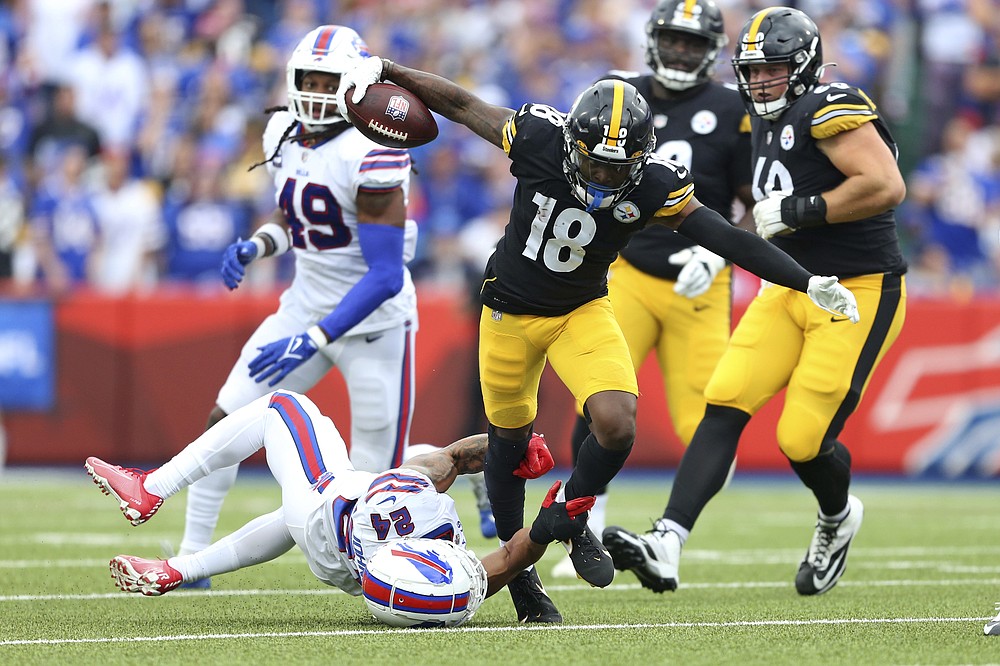 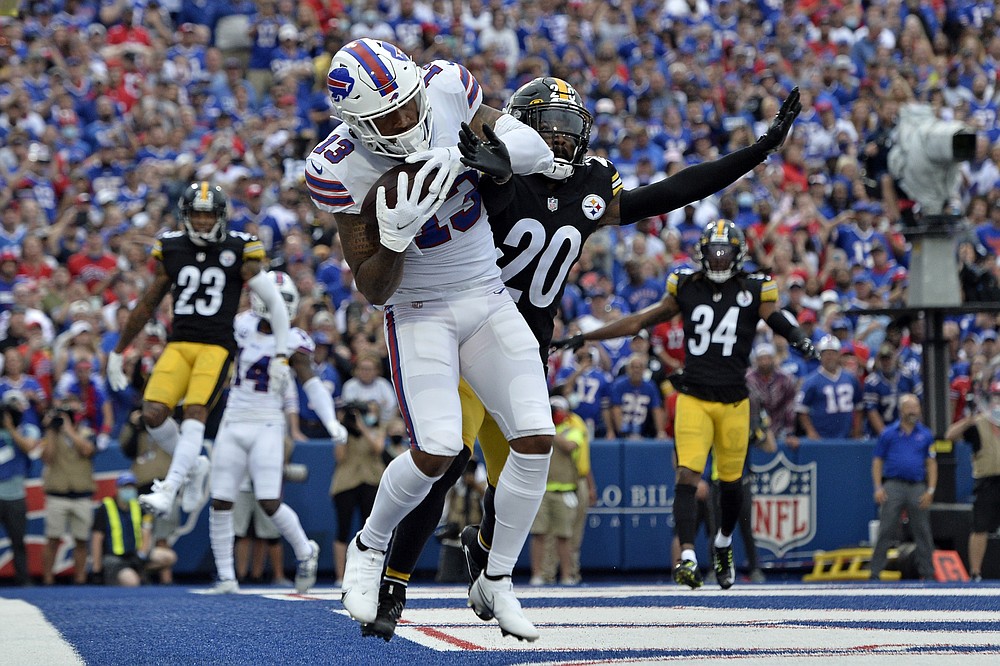