Remember when, Arkansas? There’s a story behind the car in this old photo 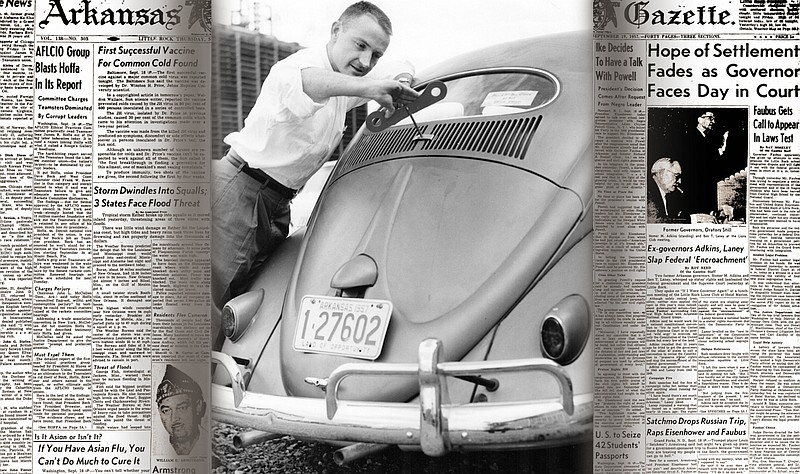 Anyone recognize what's going on in this vintage photo from the Democrat-Gazette archives?

This photo appeared Sept. 19, 1957, in the Arkansas Gazette over the caption "You just turn the key and ..." It documents a prank.

In the popular mind in 1957, cars manufactured outside of the U.S. were "foreign cars" and generally lumped under two categories: zippy "sports cars" driven by movie stars, and "cheap economy cars" driven by subversives.

I exaggerate for humorous effect, but that was a common attitude. A cartoon on the Gazette editorial page lampooned it, with two old men criticizing car shoppers: "I tell you it's un-American to want a smaller car than your neighbor."

Humorists derided all these cars as oil-dripping midgets.

Still, Ford announced it was studying the idea of making one ... before releasing a 1958 Lincoln Continental with 131 inches between the front and rear axles -- Ford's longest sedan wheelbase ever.

The VW Beetle had a 94.5-inch wheelbase, and its shape suggested a wind-up toy to Little Rock radiologist Dr. J.W. Buice.

So, Buice, a radiology instructor at University Medical Center (today's UAMS Medical Center), attached a big key to the rear of the Beetle owned by his boss, Dr. David M. Gould. Gould (1914-1961) was head of the radiology department. Gazette photographer Larry Obsitnik photographed the prank.

CORRECTION: An earlier version of this story misspelled a 20th-century Volkswagen model, the Karmann Ghia.