Hogs give Horns a taste of SEC 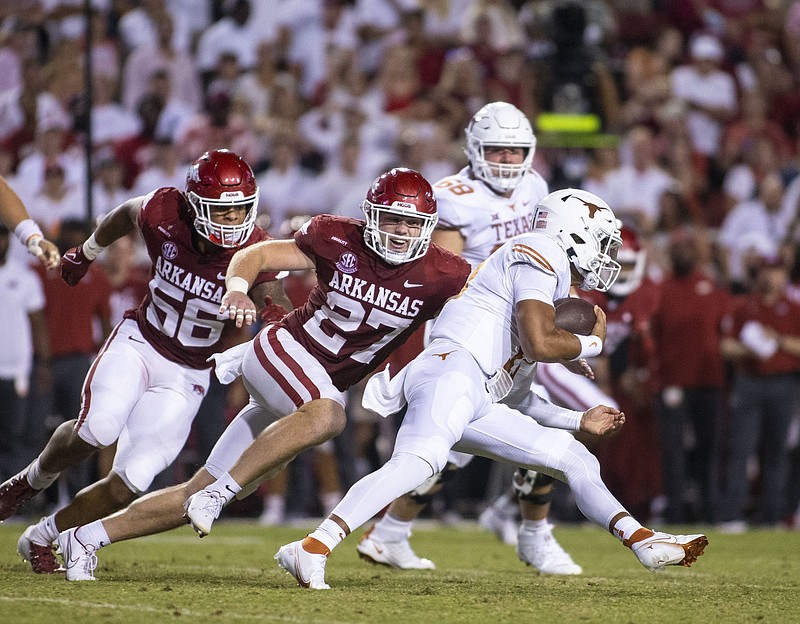 FAYETTEVILLE -- Nine months after Steve Sarkasian helped Alabama beat the University of Arkansas 52-3 at Reynolds Razorback Stadium as the No. 1 Crimson Tide's offensive coordinator, he returned to the Hogs' home as Texas' head coach on Saturday.

The outcome was far different.

Arkansas welcomed Sarkisian back by pounding the No. 15 Longhorns 40-21.

The final score might have been worse for Texas, but Arkansas Coach Sam Pittman chose for backup quarterback Malik Hornsby to take a knee on the final two plays after his 29-yard run gave the Razorbacks a first down at the Texas 10.

"Coach Sark wasn't going to use a timeout," Pittman said, declining a chance to gloat. "So I figured when we got another first down it was time to kneel it out.

"I didn't do it for any other reason than the game was over."

The former Southwest Conference rivals played their sixth non-conference game since Arkansas left for the SEC in 1992, with Arkansas holding a 4-2 edge in those matchups.

But soon the Razorbacks and Longhorns will be conference rivals again with the announcement in August that Texas and Oklahoma will leave the Big 12 for the SEC no later than 2025.

The Longhorns and Sooners could also join the SEC earlier depending on negotiations with the Big 12 about financial considerations for leaving.

Arkansas, picked to finish sixth in the SEC West in a preseason media poll, offered Texas an idea of what to expect when the Longhorns join the conference.

The Razorbacks (2-0) also sent a message to the SEC they might have been underrated, though their preseason ranking had more to do with the overall strength of the West.

Arkansas jumped into the national rankings on Sunday at No. 20 in The Associated Press poll and No. 24 in the USA Today coaches poll. Texas dropped out of the polls.

"If you want to enter this conference, you're going to get a little taste of it [Saturday night]," said Arkansas senior linebacker Hayden Henry, who had 15 tackles. "We're not the biggest, baddest team in the SEC physically, but we play really hard.

"So yeah, I guess welcome to the SEC. I don't know exactly when they're joining, but pretty soon this will be a yearly occurrence."

The Razorbacks controlled the line of scrimmage on both offense and defense -- about as SEC as you can get -- by out-gaining Texas 471 to 256 yards in total offense.

The difference in the teams up front was especially distinct in the rushing yards, where Arkansas had 333 and Texas 138.

"We're just a physical team," Razorbacks junior center Ricky Stromberg said. "I think that's the message straight up. We're a physical football team and we're not scared of nothing."

Pittman and his coaching staff have helped transform Arkansas back into a legitimate SEC program after the dark days of going 4-20 overall and 0-18 in the conference in the 2018 and 2019 seasons under Coach Chad Morris, who was fired with two games left in 2019.

Playing a 10-game, all-SEC schedule last season, the Razorbacks were 3-7 and had three losses by three or fewer points.

"I was happy for all of our coaches and our players, too, to be able to experience that," Stromberg said of a marquee victory over Texas. "You look at two years ago, we were 2-10 in a drought, and then we come back and we had a better year last year.

"Now people are rushing the field after the second game. It's just an awesome feeling. I'm so pumped for everybody."

Arkansas fans left the stands and poured onto the field after the Razorbacks shined in the national spotlight as their game against Texas was televised in prime time on ESPN.

"I don't think it put us on the map," Henry said. "But I mean, there's other teams who are going to look at our score and be like, 'Arkansas is good. Arkansas can play some football.'

"So it's huge for Coach Pittman and our team to kind of send that message."

Pittman was a long-time offensive line coach, including 2013-15 with the Razorbacks, and he returned to Arkansas last year after four seasons at Georgia.

"I feel really blessed because I've got such a good staff," Pittman said. "Our players, they do anything we ask them to do. We love it here in Arkansas."

Arkansas' remaining opponents include No. 1 Alabama, No. 2 Georgia, No. 7 Texas A&M and No. 17 Ole Miss as well as Auburn, LSU, Mississippi State and Missouri.

"You know, we're going to lose a game eventually ... and people aren't going to like me so much," Pittman said. "But [Saturday night] they do."

The players love Pittman as the results show.

"He's just a real genuine guy. He's just straight-up honest with you," Stromberg said. "There's no car salesman's pitch. There's nothing like that.

Print Headline: Hogs give Horns a taste of SEC