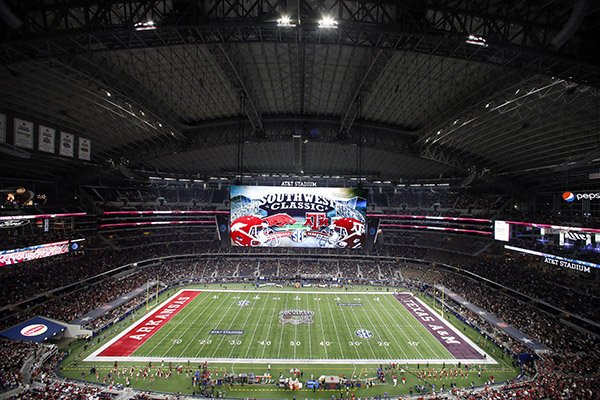 FAYETTEVILLE — CBS has chosen to televise the game between Arkansas and Texas A&M as its showcase SEC matchup next week.

The game between the No. 20 Razorbacks and No. 7 Aggies — also known as the Southwest Classic — is scheduled to kick off at 2:30 p.m. on Sept. 25. The game will be played at AT&T Stadium in Arlington, Texas.

It is the first time CBS has chosen to show the Southwest Classic since 2014, when the Aggies rallied from a 14-point fourth-quarter deficit to win 35-28 in overtime. It was Texas A&M's third consecutive win over Arkansas in a streak that extended to nine straight last year.

The Southwest Classic was played at Texas A&M's Kyle Field in College Station last year due to covid-19 concerns. It is scheduled to be played in Arlington four more times, then is expected to move back to the teams' campuses in 2025.

Arkansas and Texas A&M are 2-0 following wins against Power 5 teams over the weekend. The Razorbacks defeated Texas 40-21 in Fayetteville and the Aggies rallied to beat Colorado 10-7 in Denver.

The Southwest Classic is one of two top-25 matchups on Sept. 25, along with a game between No. 12 Notre Dame and No. 18 Wisconsin at Soldier Field in Chicago.

Either of those locations could become an attractive site for the popular ESPN pregame show "College GameDay," which typically originates from a college campus, but has aired several times from neutral sites.

"College GameDay" has been on location in Arlington six times, but never for the Southwest Classic.