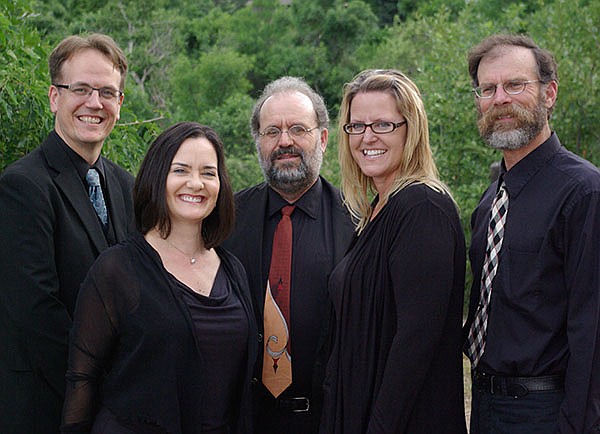 The five-piece Mont Alto Motion Picture Orchestra tours the country and regularly plays at the San Francisco Silent Film Festival, the Telluride Film Festival, the Turner Classic Movies festival and many others. The musicians will be in Fayetteville Sept. 21 to accompany a screening of “All Quiet on the Western Front.” (Courtesy Photo)

The United Nations has declared Sept. 21 an International Day of Peace, "devoted to strengthening the ideals of peace, through observing 24 hours of non-violence and cease-fire."

In Fayetteville, observation of the day will include a screening of "All Quiet on the Western Front," an epic 1930 anti-war film set during World War I. Accompanying the screening will be the Mont Alto Motion Picture Orchestra from Boulder, Colo., whose members have scored more than 125 films.

"I first saw the 1930 sound version of 'All Quiet on the Western Front' on television sometime when I was growing up in the 1950s and early 1960s," remembers Frank Scheide, a professor in the communication department at the University of Arkansas and well-known film buff. "Its disturbing treatment of war was unlike any film I had ever seen.

"When I attended a university screening of this same version of 'All Quiet on the Western Front' as an undergraduate in the late 1960s, my generation was fighting in Vietnam," Scheide goes on. "The horrific experiences of the soldiers in 'All Quiet on the Western Front,' and their questions about why they were fighting during World War I paralleled discussions relating to Vietnam at that time. My Vietnam era viewing made me question how much we had learned from history and our association with war.

"As a film historian, I am particularly grateful to the Department of Communication Film Appreciation Society for sponsoring silent film screenings featuring the Mont Alto Motion Picture Orchestra on campus. This group's live performances have been an integral part of our Native American silent film series since 2005."

"Usually a venue will want to present a particular film, and we'll be asked to create a new score for it from our music library," says Mont Alto founder Rodney Sauer. "Sometimes the venue will take our recommendations, in which case we'll usually suggest a favorite from our catalog, or occasionally, I'll choose a new one I've been wanting to create a score for." In the case of "All Quiet on the Western Front," when Sauer told Scheide he had arranged a score for the rare silent version, "I thought a screening of this anti-war classic with live music would be an excellent way to observe this year's International Day of Peace," Scheide says.

"Modern films are needed to put current situations in focus using forms of expression accessible to today's audiences," Scheide goes on. "However, focusing only on contemporary interpretation marginalizes and limits one's understanding of a subject. The universal horror of war transcends time and should be considered beyond the parameters of the current moment. Those who do not know the past limit how they interpret their present and future."

Scheide believes "today's younger people are often amazed at how quickly they can relate to a well-crafted silent film when the immediacy of live music brings that old movie to life."

"Movies produced for general audiences have always been made to be accessible. Live music is live music, no matter when it was written," he says. "Hopefully, this unique type of presentation will open doors for considering contemporary issues from a different and constructive perspective. At the very least, viewers will have the opportunity to experience an unusual artistic performance they may never have imagined, much less observed."

"We have quite an audience of people who don't normally seek out old movies, but the combination of the orchestra, the film, the concert hall, and the whole emotional experience really hits a chord," adds Sauer. "It's a kind of entertainment that was almost ubiquitous for about 15 years and disappeared almost overnight. But attending these concerts really shows the power that these movies, and this musical repertoire, still have."

‘All Quiet on the Western Front’

FYI — Sponsored by Department of Communication Film Appreciation Society, the Omni Center for Peace, Justic & Ecology and the Center for Multicultural & Diversity Education.