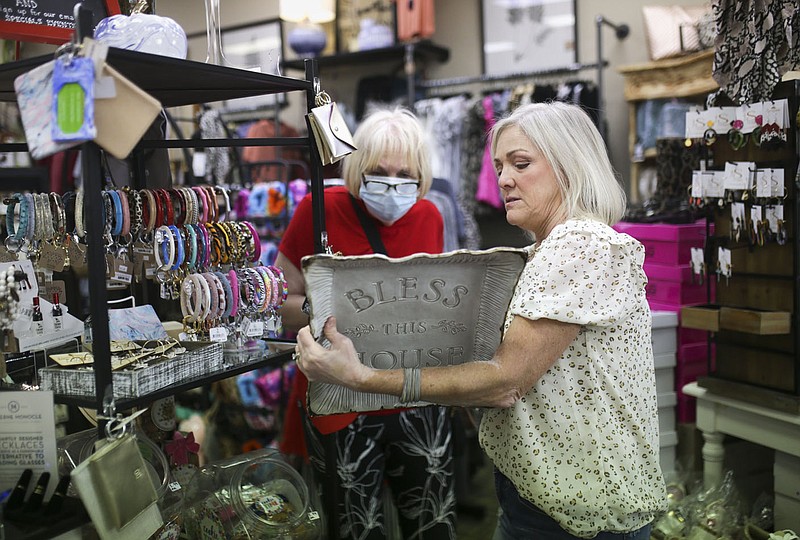 Dotted Pig owner Sherry Puttkammer (right) shows a product to Meza Harris of Rogers Friday at the Dotted Pig in Rogers. The city of Rogers' sales tax topped $2 million and for the first time was the highest among the four large cities in Northwest Arkansas. Check out nwaonline.com/210912Daily/ for today's photo gallery. (NWA Democrat-Gazette/Charlie Kaijo)

FAYETTEVILLE -- Sales tax revenue in Rogers reached a local milestone in August as the city topped $2 million and had the highest monthly total among the four largest cities for the first time.

"This is the first time we've topped Fayetteville -- ever," Casey Wilhelm, finance director for Rogers, said of the most recent sales tax revenue report.

Wilhelm said the jump seemed to be driven by people wanting to get out and about after more than a year of living with the restrictions and limitations put in place because of the covid-19 pandemic.

"We always do well in the summer," Wilhelm said. "People want to be getting out doing things, shopping and dining out. Fayetteville may slow a little bit when the students are gone for the summer."

All four of the largest cities in Northwest Arkansas and both Benton and Washington counties reported substantial growth in revenue from their 1% sales tax. Tax revenue received in August comes from sales in June.

Paul Becker, chief financial officer for Fayetteville, said he expected the rate of increase to slow but said growth of nearly 5% is still a sign of a healthy economy. Becker also said Fayetteville had several rebates in the month of June. Businesses that meet certain guidelines can apply to the state for a rebate of sales taxes they have paid.

"We're in a volatile period," Becker said of the fluctuation in revenue from city to city and from month to month. "We've got to be prepared for that volatility. But there is a lot of pent-up demand. We've been in this pandemic for a year-and-a-half now and people want to get out. Rogers benefits from people who want to get out with their dining and entertainment. A lot of the numbers we've been looking at last year and this year has been internet sales."

Becker said he's happy with the figures reported across the region. He added Fayetteville has reason to expect strong sales tax reports moving forward, pointing to the Razorback football schedule.

"We've got Texas coming in this week," Becker said. "Texas travels well. It looks like it's going to be a good game, and I expect us to be very, very busy over the weekend. We're certainly looking forward to it."

Sherry Puttkammer, owner of The Dotted Pig gift shop in Rogers, agrees the past 18 months of dealing with the covid-19 pandemic have been "volatile."

Puttkammer, who has been in business in downtown Rogers for six years, had to close her shop when the pandemic health emergency was first declared. When she was able to open, she said, she and her staff had to find new ways of doing business.

"We had to close our doors to the public like everybody else," Puttkammer said. "Then, we had to start doing things in different ways. We had to look at how can we keep on going? We started doing FaceTime appointments. We'd meet people at the door. For a while we were delivering. I was delivering all the way to Springdale. We had people calling and saying 'I've got covid but I need to have a gift delivered.'"

During the worst of the pandemic, her business was more than cut in half, Puttkammer said. Business has been recovering as the mask requirements and social distancing restrictions have been relaxed, she said, although she says she still has some "regular customers" who haven't made it back to the shop yet.

Officials in both Benton and Washington counties said they are pleased with the continued growth in sales tax revenue, but added the counties will be dealing with another issue that will reduce sales tax revenue when the 2020 Census figures are finalized.

Brenda Peacock, Benton County comptroller, said the initial figures indicate Benton County's share of its 1% sales tax will drop from 19.9% to 16.9%. The countywide 1% sales taxes are distributed among the county and the cities on a per capita basis.

Treasurer Bobby Hill said Washington County's share of the sales tax will likely drop from about 18.4% to around 16.4%. 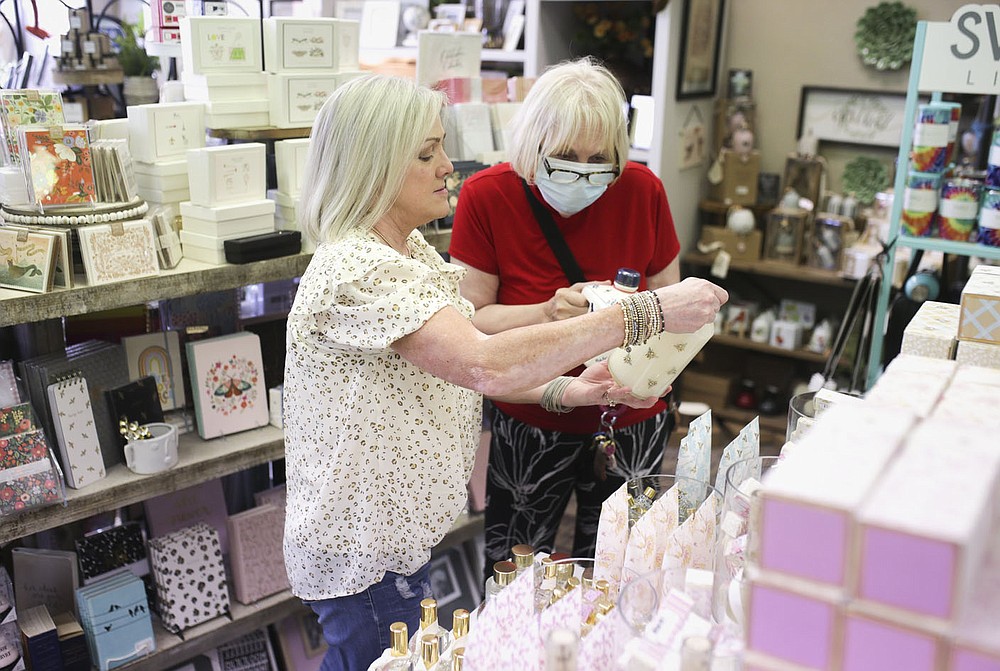 Dotted Pig owner Sherry Puttkammer (left) shows a product to Meza Harris of Rogers Friday at the Dotted Pig in Rogers. The city of Rogers' sales tax topped $2 million and for the first time was the highest among the four large cities in Northwest Arkansas. Check out nwaonline.com/210912Daily/ for today's photo gallery. (NWA Democrat-Gazette/Charlie Kaijo) 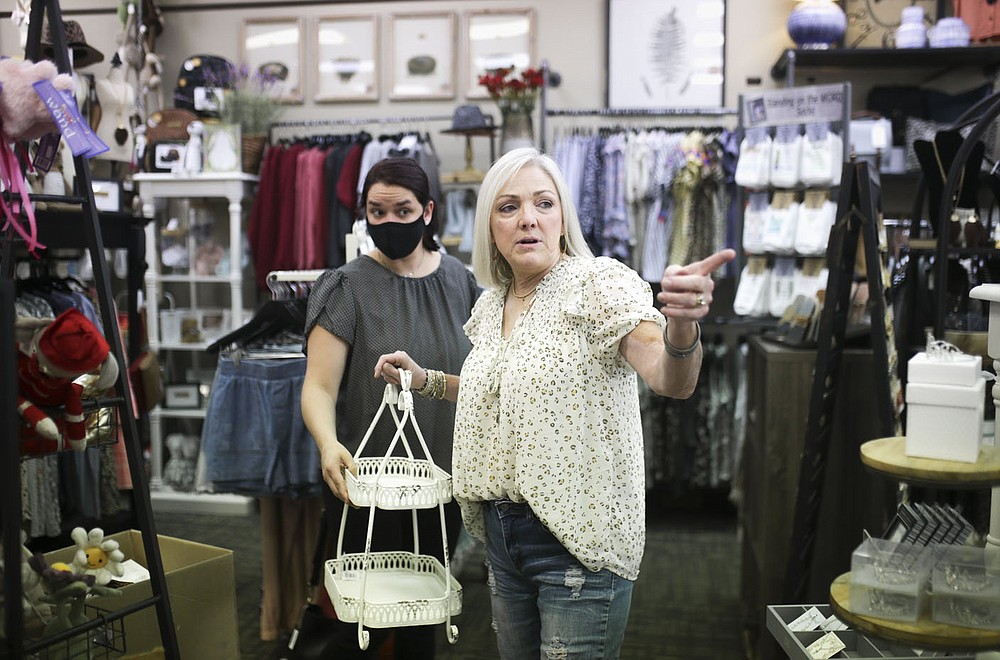 Dotted Pig owner Sherry Puttkammer (right) and sales associate Kristin Hawn put away merchandise Friday at the store in Rogers. The city of Rogers' sales tax topped $2 million and for the first time was the highest among the four large cities in Northwest Arkansas. Check out nwaonline.com/210912Daily/ for today's photo gallery. (NWA Democrat-Gazette/Charlie Kaijo) 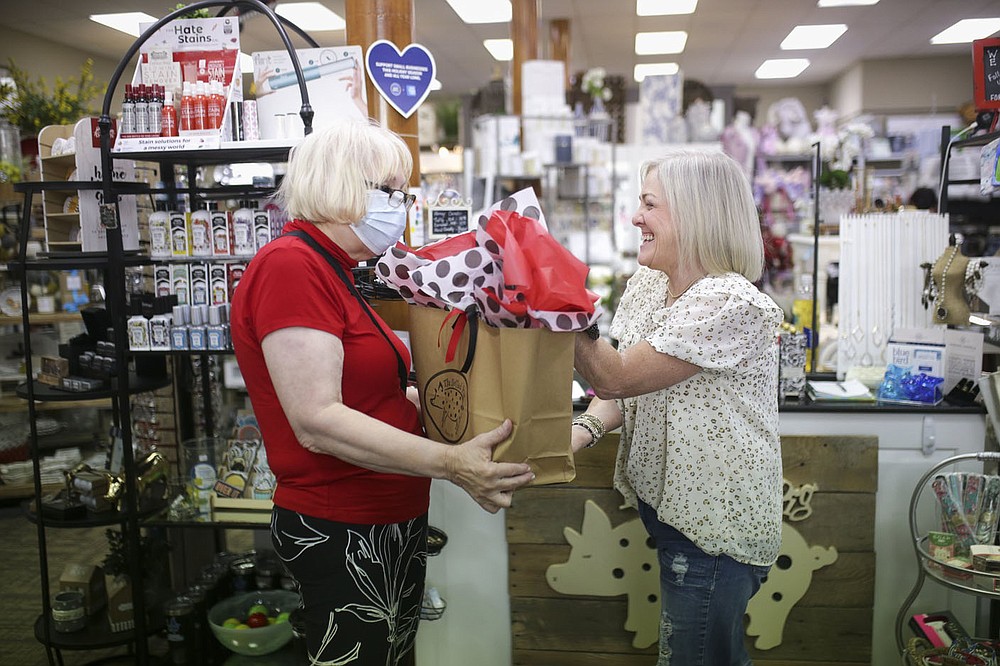 Dotted Pig owner Sherry Puttkammer (right) hands goods to Meza Harris of Rogers Friday at the Dotted Pig in Rogers. The city of Rogers' sales tax topped $2 million and for the first time was the highest among the four large cities in Northwest Arkansas. Check out nwaonline.com/210912Daily/ for today's photo gallery. (NWA Democrat-Gazette/Charlie Kaijo)
More News

Sales tax reported by cities and counties in August represents sales made by merchants in June. The merchants submit the taxes they collect to the state Department of Finance and Revenue after the end of each month. Once all of the tax money has been sent to the state, the department calculates the amount due to each taxing entity and sends that money to the local governments.

Source: Department of Finance and Administration