NFL opens with covid still in the air 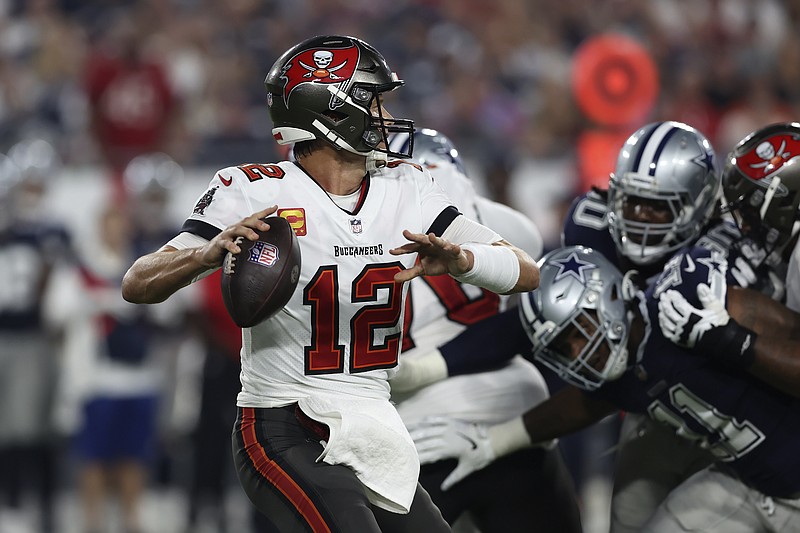 Tampa Bay Buccaneers quarterback Tom Brady (12) looks to pass against the Dallas Cowboys during the first half of an NFL football game Thursday, Sept. 9, 2021, in Tampa, Fla. (AP Photo/Mark LoMoglio)

Tom Brady didn't need to throw another pass to be considered the greatest ever, even as he took the field at the age of 44 Thursday night to win on yet another last-second drive in the opener for the defending Super Bowl champion Tampa Bay Buccaneers.

That Brady is still slinging passes -- and winning championships -- is as remarkable as it is marvelous. His mere presence in Tampa Bay made the Bucs legitimate contenders last year, and the rest of the team happily jumped on his back on a Super Bowl run that solidified his legacy and put an end to the question of whether quarterback or his coach was responsible for all the titles in New England.

If there's anything the now-traditional Thursday opener showed us, it's that the NFL is still very much a quarterback-driven league. Brady did what was needed to overcome a spirited Dallas team, though Cowboy fans had to feel pretty good themselves after Dak Prescott threw the ball 58 times -- completing 42 of them -- to give Dallas the lead before the inevitable happened with the ball back in Brady's hands.

As the new NFL season unfolds, there are intriguing quarterback stories around the league, including in Los Angeles where the Rams sent the quarterback who was supposed to lead them for the next decade to Detroit in exchange for a passer who toiled for the Lions for a dozen years without winning even one playoff game.

There's also a crop of rookie QBs who won't have to wait long to make their mark. Trevor Lawrence is starting in Jacksonville, where Urban Meyer is charged with revitalizing the Jaguars, while Zach Wilson takes his turn as the latest hopeful to lead the New York Jets back to the promised land.

Mac Jones took Cam Newton's job in New England, while Bears fans think so much of Justin Fields that his jersey is the fourth best seller in the league despite not having played an official down. In San Francisco, there's growing confidence that once Trey Lance takes the field he won't be coming off of it.

That means the Indianapolis Colts will have to worry week-to-week about whether Carson Wentz goes on the covid-19 list. It means the Minnesota Vikings don't know whether Kirk Cousins can make it through the season unscathed after missing several practices because of exposure to a positive person.

It means fans in Allegiant Stadium in Las Vegas -- who need to show proof of vaccination to attend Raiders games -- might look down and see Lamar Jackson under center for Baltimore Monday night and wonder why he didn't have to show his vaccine card, too.

They're the outliers in a league that as of last week was 93% vaccinated. They're the ones who will be tested daily for the virus and be put in five-day quarantines if they have close contact with someone who is positive.

They're the ones who talk vaguely about personal decisions while ignoring what their decisions are doing not only to their teammates but to anyone around them.

By now, the NFL surely hoped that covid-19 would not be the defining issue of the season. By now, we all hoped to be past the pandemic that never seems to end.

Don't forget that the new season will also be a game longer, throwing another wrinkle in the constant battle to keep enough players -- particularly quarterbacks -- healthy enough to field a competitive team.

But the bottom line is the NFL will get the season in and get it in on time. That was proven last year when the league managed to do what looked impossible, even without the luxury of having vaccines available.

That means there will be a Super Bowl next February in Los Angeles. It means we'll have football through the holidays, and millions of Americans will be able to take advantage of the expansion of legalized sports betting to wager a few dollars on their favorite teams.

Right now the best bets may be on the teams where everyone -- especially the starting quarterback -- is fully vaccinated. 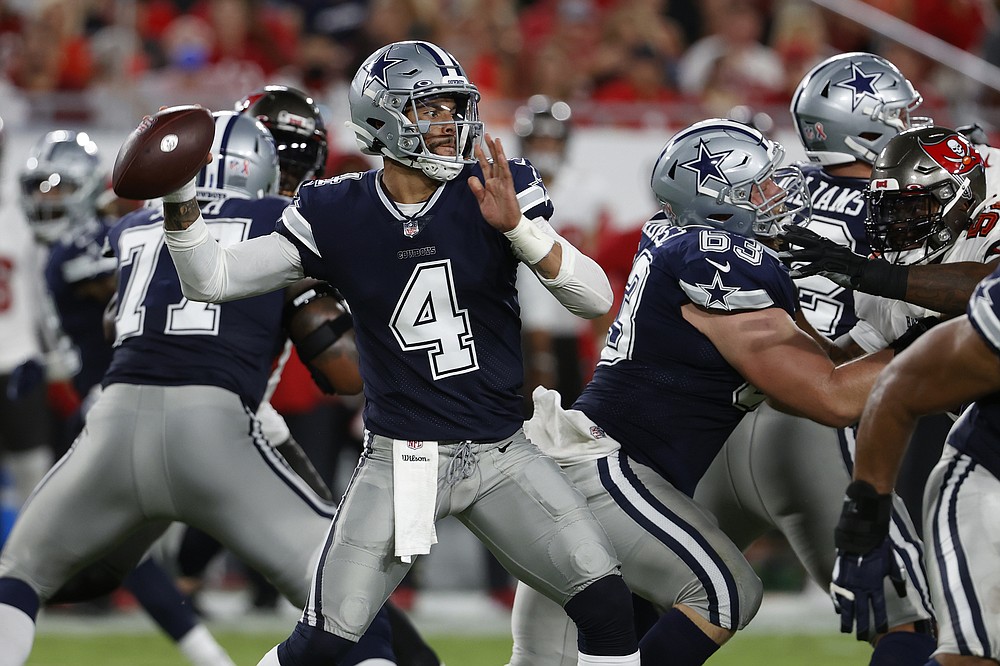 Dallas Cowboys quarterback Dak Prescott (4) throws a pass against the Tampa Bay Buccaneers during the first half of an NFL football game Thursday, Sept. 9, 2021, in Tampa, Fla. (AP Photo/Scott Audette) 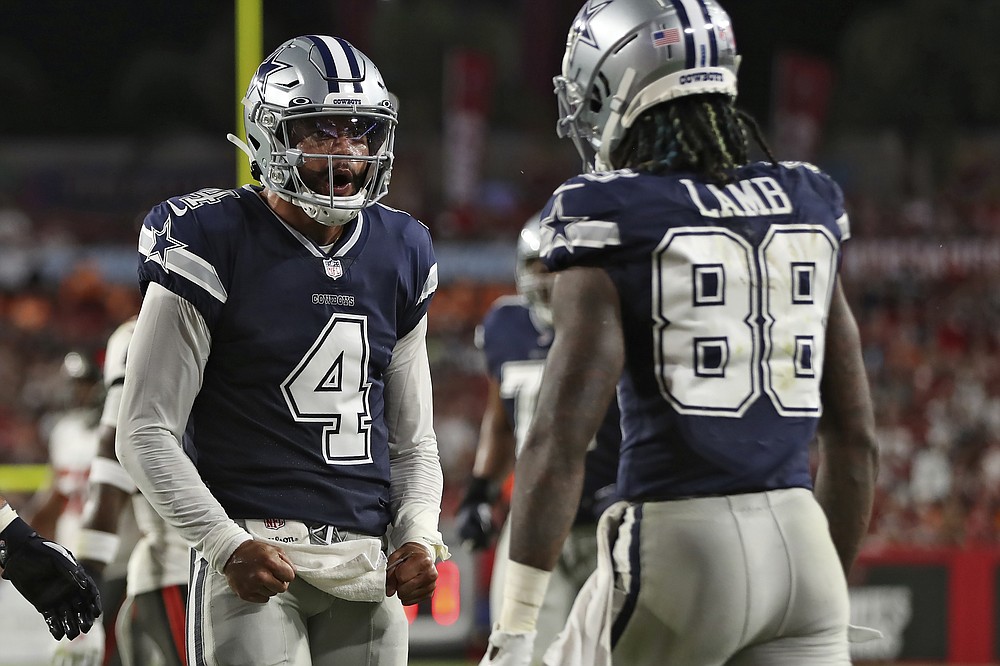 Dallas Cowboys quarterback Dak Prescott (4) celebrates with wide receiver CeeDee Lamb (88) after a touchdown against the Tampa Bay Buccaneers during the first half of an NFL football game Thursday, Sept. 9, 2021, in Tampa, Fla. (AP Photo/Mark LoMoglio) 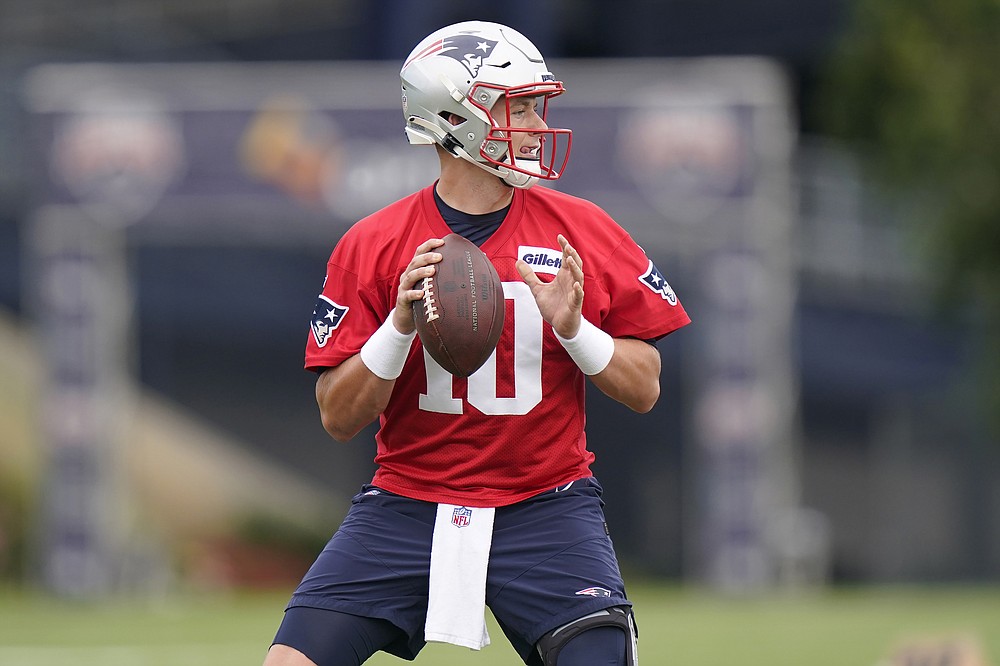 New England Patriots quarterback Mac Jones prepares to pass the ball during an NFL football practice, Tuesday, Aug. 31, 2021, in Foxborough, Mass. The Patriots released quarterback Cam Newton on Tuesday, Aug. 31, clearing the way for rookie Mac Jones to open the season as New England's quarterback, according to a person with knowledge of the move. The person spoke to the Associated Press on condition of anonymity because the decision has not been announced. (AP Photo/Steven Senne)

Print Headline: NFL opens with covid still in the air