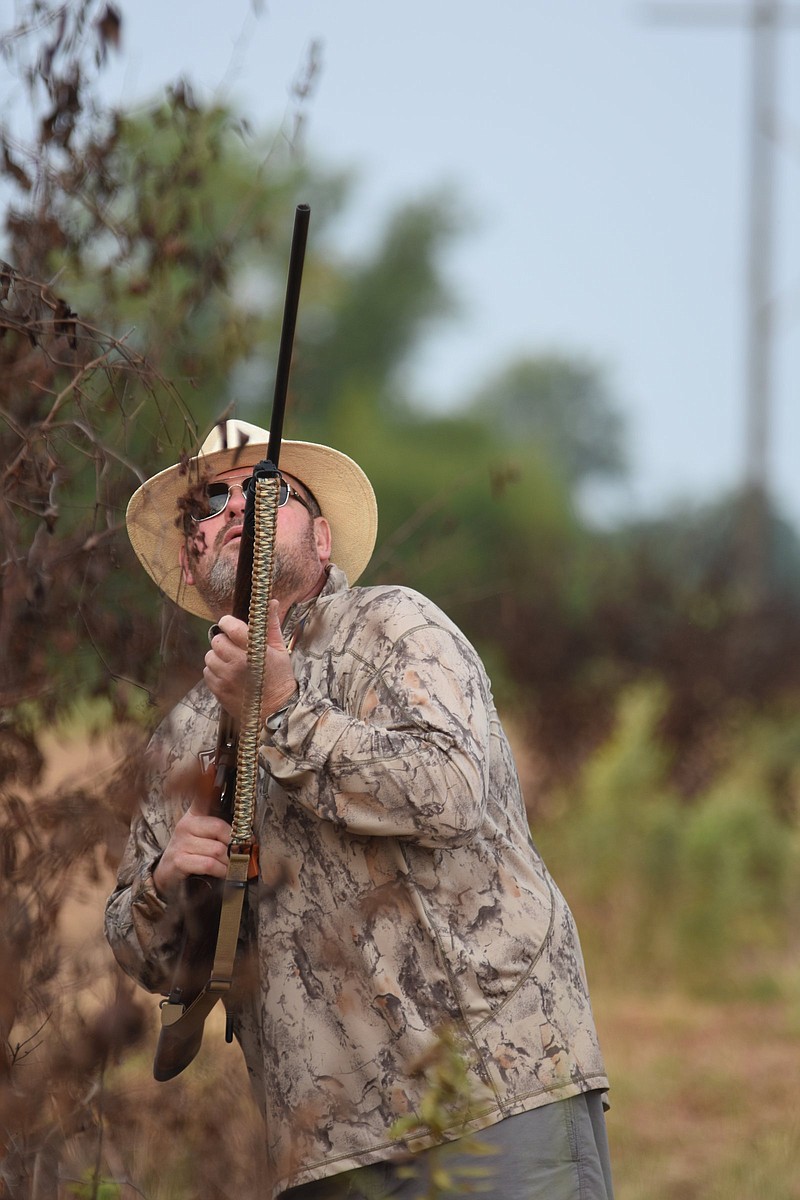 Instead, night gently morphed to light, revealing a thick, low fog over a small field in central Arkansas.

The shift seemed to occur in mere minutes. In the darkness, four hunters unleaded their seats, guns, shells, drinks and assorted gear. Cooper, Joe Volpe's esteemed yellow Labrador retriever, was too impatient for all the formalities and leaped out of Volpe's open truck window.

Just like that, it was morning, ushered in by squadrons of very large mosquitoes. I like them better than the small variety that inhabits my little corner of Hot Spring County. The big ones aren't as flighty. They land and linger, giving a victim plenty of time to smash them before applying a healthy barrier of mosquito repellent. We parked our trucks at opposite ends of the field and then arrayed our various toys. I put up a Mojo spinning wing dove decoy in one part of the field, and Volpe set out an array of Mojo Flock A Flickers.

At the other end of the field were Brett Morgan and Jeff Henry, and Henry's Lab Fin Baker. Henry erected a special retriever set out of sun for Baker, who put on an exquisite retrieving exhibition. He broke only on command and responded to Henry's hand signals to home in on downed doves that blended perfectly with the terrain.

I used two loads, including about one-third of a box of ancient handloads of 3/4-ounce No. 71/2 shot and Green Dot powder. I also used Winchester Super X 1-ounce loads. I brought a box of Remington Express Long Range that I didn't open.

When using sub-gauges for doves, you must understand what your gun can and cannot do. What it can't do, especially with a skeet barrel, is to down doves at distances that are easy for tighter choked 12- and 20-gauges. It took me about five shots to reach that conclusion. Limiting my shots to birds that were 20-30 yards out, I got a quick limit with a only 43 rounds fired. That's a tad under the standard 1:3 average.

Henry performed similarly with his 28-gauge.

It was easy to tell when Morgan fired. A 28-gauge makes a resonant boom that's quite a bit softer than that of a 20-gauge. A .410 makes a distinctive pop.

And then, of course, was Volpe's anti-aircraft cannon. Unbound by sub-gauge range limitations, he served warning that doves were pretty much vulnerable across nearly half of the field.

The action started slow, as it often does. Doves arrived at dawn in singles, doubles and triples. After long breaks, they arrived in fours, fives and sixes. As the morning progressed, we saw multiple flights of 20 and 30.

Shooting into big flights is chaotic. Those birds were astonishingly close, but you still have to lock onto one bird. You lead it, shoot it, and follow through. That shot bursts the flock, whose members quickly accelerate while diving, climbing and making juking, corkscrew maneuvers. Amid that chaos, you pick out a second bird, lead it, shoot it and follow through. It all happens in a heartbeat. For us with autoloaders, a third shot is available for a straggler, but that shot is seldom fired. I was thrilled to get two doubles. One was from a big flock, and the other was from a trio, with the second bird flying straight away on full afterburner.

The most satisfying kills are the head shots on high birds. They seem to stop in midair and pinwheel slowly to the ground like a giant maple seed.

All four of us had limits by 8 a.m. We spent the next half-hour picking up our spent hulls, water bottles and other discards. I kept all the hulls for reloading.

Unlike other fields, which get shot out by the second day, Morgan said his field will produce for most of the season because he hunts it lightly. As with his duck hunting spots, Morgan hunts his dove field for only a few hours.

"We'll let it rest the rest of the day and tomorrow morning," Morgan said. "We'll come back in and hunt it tomorrow evening. That lets the birds get comfortable, and they'll keep coming in here. They're like ducks that way. You'll educate them real quick if you hunt it too hard."

Henry was thrilled for everything that opening day of dove season represents.

"It's the first big day of hunting," Henry said. "It's Labor Day weekend. High school football season opened last night, and college football season starts today. It's the start of all the things we love about fall."

In the cool of the evening, dove breasts wrapped in bacon and stuffed with cream cheese and jalapenos crackled on the grill. It was the first of many wild game feasts to follow.