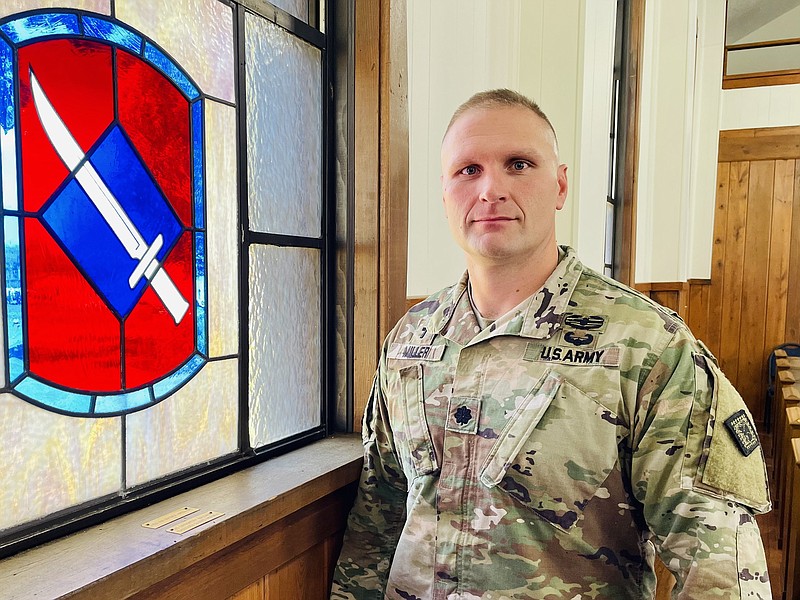 Lt. Col. Jeremy Miller, a senior Army chaplain, stands in the chapel at Camp Robinson in North Little Rock. The insignia of the 39th Infantry Brigade, which features a Bowie knife, appears on one of the windows. (Arkansas Democrat-Gazette/Frank E. Lockwood)

When terrorists knocked down the World Trade Center, thousands of young Americans rose up, ready for battle.

Jeremy Miller, a sophomore at Ouachita Baptist University on Sept. 11, 2001, was among those eager to serve.

"That's where my life began," he says.

"I was watching the TV screens and my mind-set was, I wanted to hit back. I wanted to defend our country. I wanted revenge," Miller says. "Sept. 12, I walked into the recruiter's office."

On Sept. 13, with the remains of the Twin Towers still burning, the 19-year-old Greenbrier native submitted the paperwork that would lead to a life of military service.

After his 2004 graduation from OBU, Miller would eventually serve in Afghanistan, but not in the role he had originally envisioned.

Instead of law school, Miller trained as an artillery officer before receiving a higher calling.

Today, he is a lieutenant colonel with the Arkansas Army National Guard and he serves as its Senior Army Chaplain.

The Sept. 11 attacks killed 2,753 people in New York, 184 people at the Pentagon and the 40 passengers and crew aboard Flight 93, which crashed outside Shanksville, Pa.

With war erupting in the wake of the Sept. 11 attacks, Miller was preparing to fight. During his senior year at OBU, he volunteered to attend Army Mountain Warfare School in Jericho, Vt.

Moments after completing his final land navigation course, an official there told him, "Congratulations. You pass," before adding, "You have a phone call."

In the moments that followed, he learned that his father had had a massive heart attack.

"He was teetering [between] life and death multiple times," though he ultimately survived, Miller says.

As he hung up the phone, the young soldier told those around him that he needed to return home.

"I remember the chaplain came in at that point and he said, 'Your bags are already packed. Your ride is waiting outside. Your certificate of graduation is being printed off right now. Your flights have already been taken care of. You just have to go get on the plane. We've taken care of everything," he recalls.

"He prayed with me and stuck me on a plane," Miller says. "That was my first true dealing with a chaplain caring for soldiers."

The experience drove home to Miller the importance of the chaplaincy.

Nonetheless, he remained on his initial career track.

"It was just a small, simple job at the Professional Education Center," he says. "And while I was there, I got a phone call saying, 'Hey, if you want to go to seminary, we are in desperate need of chaplains.'"

Only three of the 18 chaplaincy positions were filled at that point; the skeleton crew that remained was responsible for ministering to just shy of 7,000 troops.

"That really began to change the trajectory of my life," he says.

For 3 ½ years, he took courses at the Conway campus of the Baptist Missionary Association Theological Seminary, eventually earning his master's of divinity degree there.

"I would work every day as an operations officer, and at night I would go to school," he says. "In April of 2007, I officially pinned on as a chaplain."

After five years of stateside service, Miller was finally dispatched to Afghanistan.

It's an assignment he willingly accepted.

Miller went with the 39th Infantry Brigade Combat Team. Its insignia, which features a Bowie knife, adorns his uniform and appears on a stained glass window at the Camp Robinson chapel.

The chaplain was given a shiny new Bowie knife, suitable for framing, and a three-fold mission.

"My job was always the same: Comfort the wounded, nurture the living, and honor the dead. And we did all of those things," he says.

When deaths occurred, it was his responsibility to be present as the casket was loaded onto the plane, offering prayers before the final flight home.

While Bagram Airfield was his base of operations, Miller was often away.

"I was the only chaplain for the entire task force" of nearly 1,000 service members, he says.

"Of the one year we were on the ground, I was probably in the air 125 days flying somewhere," he says. "I was constantly moving."

At Bagram, Miller led Bible studies for 25 or 30 service members, typically in the chapel annex.

During one particularly busy period, he suggested holding the meeting near their work stations instead.

The shift in locations seemed providential; that day the base came under attack. One of the rockets exploded right in front of the chapel, spraying the building with shrapnel.

Without the change in location, "we would have absolutely had wounded or killed in action on the spot," Miller says.

After his deployment, Miller met his youngest daughter, born seven months before his return from Afghanistan.

Back at Camp Robinson, he works to find and prepare other chaplains for ministry.

Earlier this year, he was named Joint Forces Headquarters Chaplain.

In that capacity, Miller says he handles "recruiting, mentorship and training of all of our chaplains across the state."

"Service members -- whether they're Army, Navy, Air Force, Marine Corps, Space Force or the Coast Guard -- are asked to do some of the hardest things out here, and a lot of that can be taxing on you physically, mentally and spiritually. Those chaplains are there to help you recover," he says.