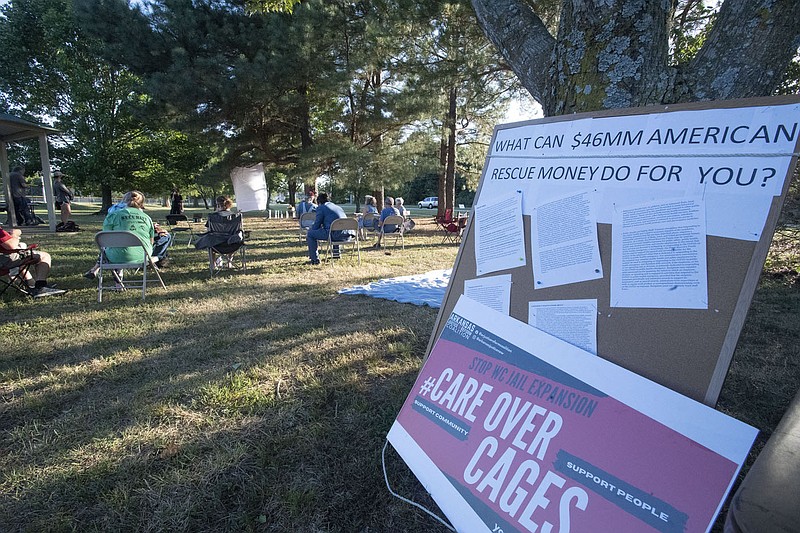 Community members visit during a cookout September 8, 2021 at the Gary Hampton Softball Complex in Fayetteville. This event was organized and hosted by Arkansas Justice Reform Coalition. The purpose of this event was to meet with the community to hear their concerns and opinions as to what the community&#xed;s priorities are, specifically with regard to the American Rescue Plan Act money received and to be received by Washington County. Visit nwaonline.com/210000909Daily/ (NWA Democrat-Gazette/J.T. Wampler)

FAYETTEVILLE -- A crowd of between 40 and 50 people came together Wednesday evening to call for an open community dialogue on how Washington County should use the $46 million it is set to receive as part of the American Rescue Plan.

Organized by the Arkansas Justice Reform Coalition, the event was billed as "a community cookout conversation." Tables were set up for voter registration and to offer assistance with applying for rental assistance funds that are also available through the county.

Sarah Moore of Fayetteville, one of the organizers of the event, said the group plans to have similar gatherings across Washington County. Moore said the group has not finalized the schedule but is planning events in Springdale, Lincoln, Prairie Grove and the West Fork/Greenland area.

Moore said she hopes the county's elected officials will listen to and consider the concerns of county residents.

"You can't serve your community without listening to them," Moore said.

Moore said the group also has a petition asking Washington County officials to "pause" any spending of the American Rescue Plan money until a robust public discussion of the possible needs and uses for the funds is completed.

Washington County has received $23 million this year under the plan and expects to receive another $23 million next year.

Benton County will receive a total of $54 million -- $27 million per year over the next two years.

Allie Brown of Fayetteville, said grew concerned late last year when Washington County received about $4.5 million in federal funds under the CARES Act. The Quorum Court recently shifted about $3.4 million of the CARES Act money into the county's reserve fund rather than allocate it for covid-19-related needs. Brown said she has watched the Quorum Court's budget process and is afraid the county will spend the American Rescue Plan funds on a proposed jail expansion without considering the needs of the community.

"I started being interested when they didn't see fit to use the CARES Act money for community nonprofits to help with food and rental assistance," Brown said. "I understand our county is growing in many different ways. But nobody has persuaded us that the best use of this money is a jail expansion. If they believe that, they need to make that argument. The county's own criminal justice system assessment has a lot of recommendations for ways to decrease the number of people going into the jail. We need to see an honest effort to implement those recommendations before they spend the money on the jail."

Stafford said she thinks Washington County needs to set up a process for deciding how to spend the American Rescue Plan money. She pointed to Benton County, where the Quorum Court formed a committee to hear ideas on how to use that county's funding that began meeting in August. Benton County has also set up a page on the county's website where organizations can apply for funding.

"We're not doing any of those things," Stafford said. "I think it's a sad indictment of us in Washington County when Benton County is showing us up." 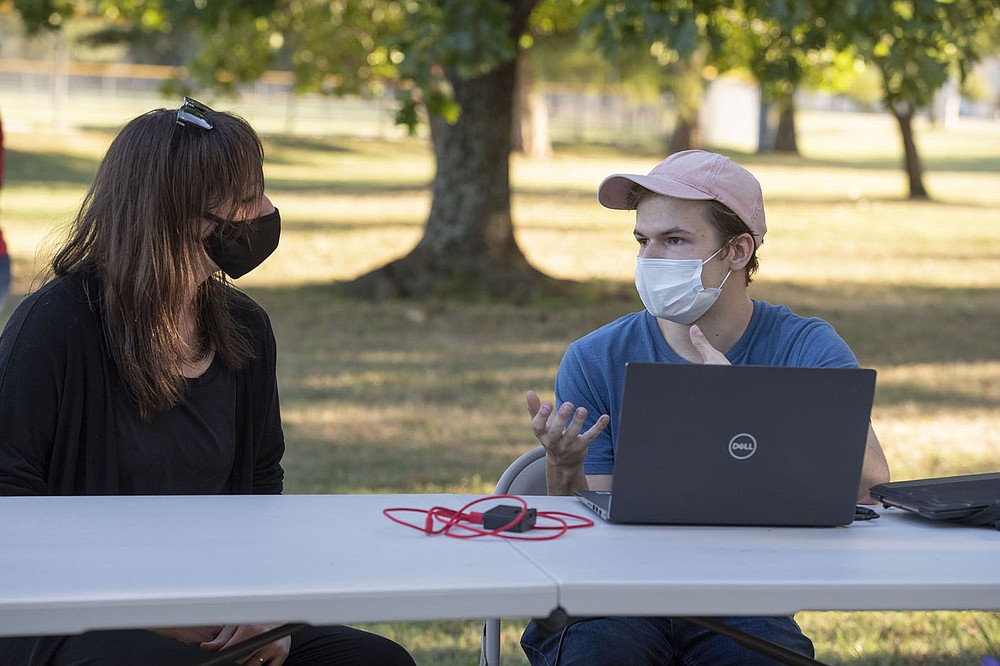 Lucky McMahon (left) and Billy Cook, both of Fayetteville, visit during a cookout September 8, 2021 at the Gary Hampton Softball Complex in Fayetteville. They were on hand to help community members with information about rental assistance. The event was organized and hosted by Arkansas Justice Reform Coalition. The purpose of this event was to meet with the community to hear their concerns and opinions as to what the community&#xed;s priorities are, specifically with regard to the American Rescue Plan Act money received and to be received by Washington County. Visit nwaonline.com/210000909Daily/ (NWA Democrat-Gazette/J.T. Wampler)
More News

The Rescue Plan will provide needed relief to governments to enable them to continue to support the public health response and lay the foundation for a strong and equitable economic recovery. In addition to helping these governments address the revenue losses they have experienced as a result of the crisis, it will help them cover the costs incurred due responding to the public health emergency and provide support for a recovery — including through assistance to households, small businesses and nonprofits, aid to impacted industries, and support for essential workers. It will also provide resources for governments to invest in infrastructure, including water, sewer and broadband services.

Source: U.S. Department of the Treasury