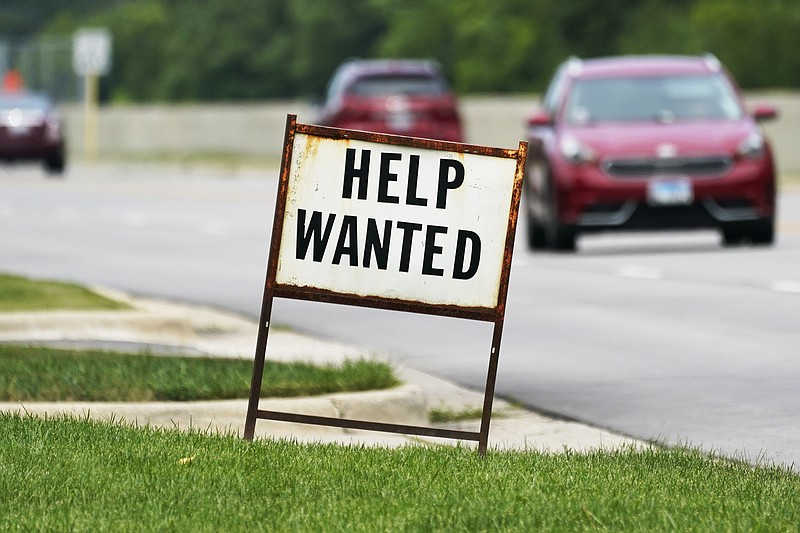 A help wanted sign is displayed at a gas station in Mount Prospect, Ill., Tuesday, July 27, 2021. The number of Americans applying for unemployment benefits fell last week by 14,000 to 385,000, Thursday, Aug. 5, more evidence that the economy and the job market are rebounding briskly from the coronavirus recession.(AP Photo/Nam Y. Huh)

FARMINGTON -- A partnership between the Fayetteville Chamber of Commerce and the Tahlequah, Okla., Regional Development Authority, along with a host of other entities, is establishing a regional medical manufacturing initiative with plans to create high-paying jobs and to support area economies.

The coalition involves entities in both states, including eight cities, three counties and the Cherokee Nation and was touted Tuesday morning in Farmington with elected officials, Chamber of Commerce representatives and Gov. Asa Hutchinson in attendance.

The new venture dubbed Heartland Advanced Medical Manufacturing Regional Cluster aims to identify, attract and keep health care manufacturers in the Northwest Arkansas and northeast Oklahoma area. The plan focuses on manufacturing devices, components and gear for the health care industry that will create jobs and careers for workers and high school graduates.

Hutchinson said the initiative and the cooperation of all its varied players is good for Northwest Arkansas, the state and the region and will help meet the future needs of Arkansas and the nation in the area of medical technology. He said a goal is to make the Northwest Arkansas region one of the top 20 health care destinations in the world.

"That's a bold statement whenever you think about that," Hutchinson said.

He said the initiative will give both Arkansas and Oklahoma a chance to participate in the drive over the next decade to bring major medical manufacturing back to the U.S. Hutchinson recalled an incident early in the coronavirus pandemic when personal protective equipment bound for Arkansas from China was seized in Spain and never made it to the state, highlighting the need for U.S. suppliers for key medical equipment.

Hutchinson said the venture should benefit from a bipartisan federal infrastructure bill that's expected to pass: along with increased Economic Development Administration grants including the Build Back Better Regional Challenge program and American Rescue Plan funds; the state's focus on creating a talented and skilled workforce; and expanded high-speed broadband investment in rural communities along U.S. 62.

Steve Clark, president and chief executive officer of the Fayetteville Chamber of Commerce, said the venture plan was two years in the making and capitalizes on the state's initiatives to educate and train a modern and tech-savvy workforce. He said the jobs the initiative hopes to attract for young people and other Arkansas workers, typically pay in the area of $25 to $35 an hour.

He said plans are to fund the program in part through the Building Back Better program grants with a target of $75 million, of which $20 million would go to a data center.

A feature of the program will be a website that will centralize most aspects of attracting a major company to the region, including available land and a streamlined and uniform permitting process that can all be initiated through the site.