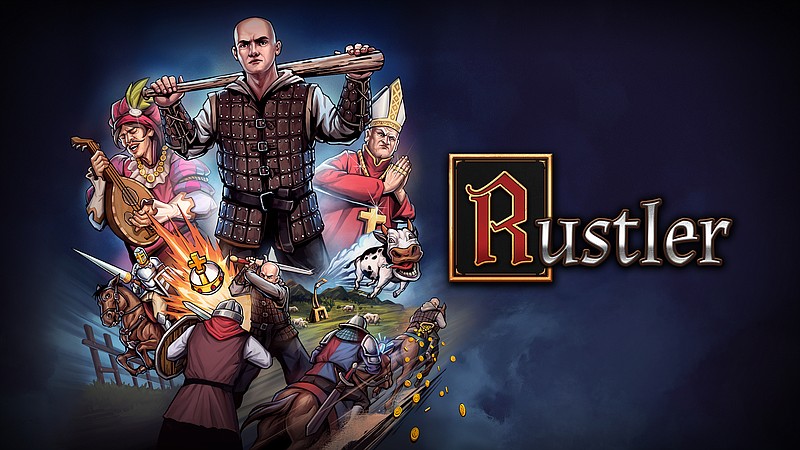 "Rustler" is an open-world sandbox game that takes its cues from early "Grand Theft Auto" games. It's filled with intentional historical inaccuracies and lots of satire and irreverence — some that works, and some that doesn't.

Sometimes it's important to dial back the humor just a little bit. There's a line between "don't take me seriously" and "trying too hard," and it gets crossed a few times in "Rustler."

In "Rustler," you're a guy named Guy, and along with your buddy (named Buddy), you take part in various rampages and crimes across the kingdom, winning fame, fortune and maybe the hand of a princess.

Like its "Grand Theft Auto" spiritual predecessors, "Rustler" is a fairly simple game, with Jutsu Games devoted to keeping players' interest with crude, low-brow humor, like passing gas and burps. In fact, there are buttons devoted to doing just those two actions. Once in a while is fine, but too much leaves a bad taste. Liberally peppering the lot with uninspired "Monty Python" references does little to improve the game's flavor.

The game also had some jokes that landed smartly, however, and only the most humorless of scolds could finish "Rustler" without a few chuckles.

Acts of grand theft horse (and other mayhem Guy and Buddy will commit) give players a "wanted" level just like in "Grand Theft" titles, with police on horses (complete with flashing red and blue lights) giving chase. To shake the coppers, players can tear down their wanted posters or get their mounts sprayed a different color in the Pimp My Horse station.

While "Rustler" is an open-world game, it's also not a long game. The main mission takes about six hours to complete, and 10 to 15 hours is enough to do all the side quests and 100% of the game. During the main story, you'll sometimes come to an impasse, and so you must spend some time doing side quests before the next main-story segment unlocks (also a very "Grand Theft"-like feature).

The side quests are a smorgasbord of wackiness and degeneracy, such as helping a corrupt priest or debt collector, or aiding a moonshine business run by knights. Ultimately, though, most missions are pretty similar -- go to location X, commit theft, murder or property damage, then go to location Y. That's not to say there isn't variety. Fire, for example, is a multipurpose tool in "Rustler," used for igniting witches, guards and villagers' houses. Hint: You do not play a hero in this game.

If there's anything unforgivable in this game, it's the checkpoint system, which when you die makes you spawn, unhorsed, far from your mission. You have to go back through dozens of dialogue bubbles (filled with jokes that might have been funny the first time but are definitely not on the second or third go-round). It's almost worth playing the game on easy mode, cheesing combat with a crossbow, just to avoid that.

Speaking of combat, Guy can use a variety of weapons, including spears, swords and axes, with the ability to block and dodge attacks that many players will be immediately familiar with. The sword and shield make a solid combo, offering offense and defense, but keeping enemies at length with the spear is also effective. Timed blocks will make enemies vulnerable to attack, and charged-up heavy attacks can be dodged.

Guy will also find horseshoes that can give him upgrades, improving skills to assist in combat, such as boosting maximum horsepower, reducing stamina costs from fighting and running, or leaving Guy with one horsepower instead of making him die in what would have been a fatal attack (humorously called Plot Armor).

Overall, the game hits more than it misses, and while fairly short, it's also moderately priced. I love seeing young developer teams shoot their shots. The developers have also helpfully included demos on some platforms so players can check it out before purchase. It's not a game for everyone, but it might be for you.