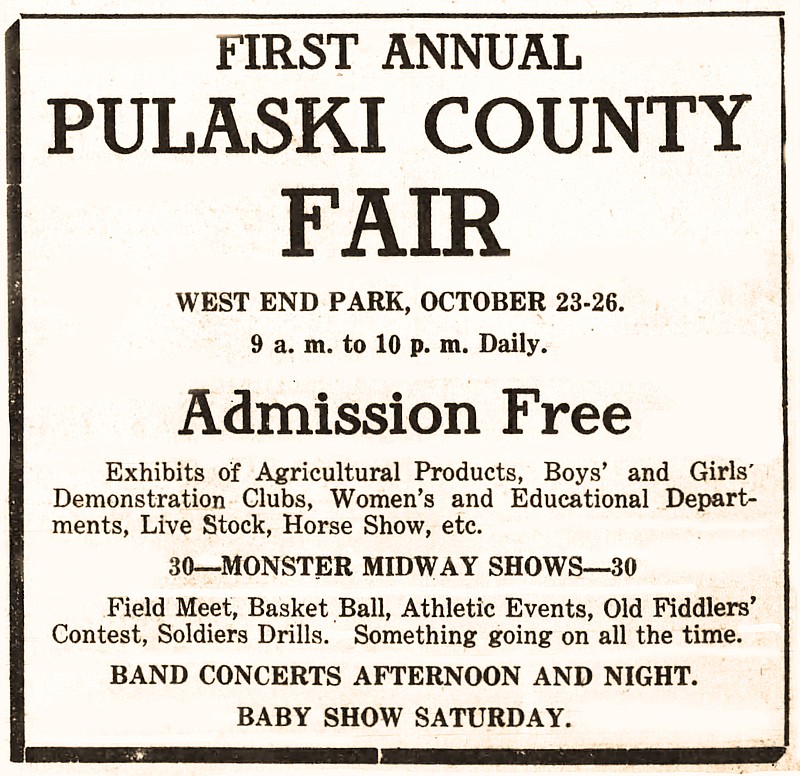 Confidential to The Pulaski County Fair:

I know that history buffs around here will catch and respect that subtle but solid nod to the other first annual Pulaski County Fair, the one that was not held on the north shore riverfront — in 1912 — because it was at West End Park.

West End Park is today, mostly, underneath Little Rock Central High School. The area is nowhere near the north shore riverbank — unless you looked at both of them from way high up in the air. So, the new Pulaski County Fair probably really is the first ever so-named fair to be held right where it will be held.

None of the other annual Pulaski County Fairs were anyplace other than Little Rock's Forest Park, so far as I can tell from the newspaper archives. Forest Park is a pleasantly vaguely defined older neighborhood known for sweet bungalows with (perhaps) one grounded outlet apiece, potential-packed fixer-er-uppers, and grand houses that are either fabulously renovated or candidates for demolition. But it used to be a 160-acre amusement park in the part of Little Rock known today as the Heights.

These county fairs had it all — baby contests, horse racing, midways, livestock, pie — pretty much the modern complement of county fair appurtenances.

Gallery: Back to the Pulaski County Fair

The second annual Pulaski County Fair was in 1913 and included a fly- and bait-casting contest and a 12-foot model of the battleship Arkansas. The third annual, in 1914, staged a cantata, "Arkatta," with 60 voices singing the history of Arkansas "from the beginning, even before the Red Man's advent."

The fourth fair, in 1915, included a masque titled "Sanctuary" that was performed on a stage among some pine trees. "Sanctuary" was an appeal for the conservation of bird life and involved hundreds of children in bird costumes.

The 1915 fair did not draw multitudes. So that year, 44 men on the fair-planning team voted to look into bringing the Arkansas State Fair back to Little Rock.

The city had originated the Arkansas State Fair in 1868. But within a generation, interest flagged and the fair organization sold off its land. First Fort Smith and then Pine Bluff re-branded their county fairs as state fairs until, in 1906, an energetic association formed at Hot Springs to grab the fair. Little Rock's Pulaski County Fair Association was going to have to wrest it away from Hot Springs.

Hot Springs somehow got wind of Little Rock's hankering for its fair, possibly because it was in all the newspapers. With renewed vigor, Hot Springs held on for one more year before letting it go to Jonesboro. Jonesboro's state fair fizzled.

So, anyway, the 1916 Pulaski County Fair also was held at Forest Park, and it was quite the failure.

After rain and rain and more rain, the association voted to prolong the agony one more day so rain-fearing people might have a chance to attend. Too bad, that day would have been a Sunday. Up rose the preachers of Little Rock, fiercely asserting the right of god-fearing people not to have fun on Sundays, and the fair shut down on Saturday. Old News wrote about this in 2016. You can find that column at arkansasonline.com/96old.

There was no Pulaski County Fair in 1917, but there was the "first annual," three-day exhibit of the Pulaski County boys' corn and pig clubs and the girls' poultry and canning clubs. The boys pig club had 50 members, each of whom had been entrusted the year before with one Duroc sow. Each boy agreed to "start an endless chain" by giving some neighbor boy a piglet from his first litter. There were awards and cash prizes, but no midway, only a display of canned goods by the moms.

In 1919, a Pulaski County Negro Fair at Philander Smith College was well attended, according to the Arkansas Gazette. Will Flowers, a farmer at Wrightsville, won first place for general farming. His 210 acres in the Fourche bottoms included a sorghum plant from which he sold 846 gallons of sorghum. His canning plant furnished canned tomatoes, corn, string beans, sweet potatoes and apples for his farm store.

In 1920, the Negro County Fair was at Liberty Hall, with 250 exhibits. Adults, children, clubs and communities competed. Will Flowers won an award for a display of 52 items raised on his farm. And young Booker Flowers took a first prize for corn.

Friend Reader, I hope you want to know more about the "Arkatta" performed at the county fair in 1914, because it sounds wonderfully awful. It was written by John C. Small in collaboration with Masonic poet laureate Fay Hempstead and Miss Sarah Yancy Cline, who wrote lyrics.

The cantata included what the Gazette described as an Indian legend "of a powerful idol of the Arkansas red men named King Coyocophile." He reigned over the beasts and birds ages before man came. His animal subjects prayed to him, and when he answered his voice was like peals of thunder.

The curtain rises upon a spring tableau — a tangle of trees and vines with noise representing bird songs, especially the song of the bobwhite. From a hollow tree emerges "a strange sort of fawn, half man-like, half beast." It is Coyocophile, who demands to know why he was awakened from this long sleep.

He wasn't supposed to be disturbed unless someone found a new species.

His subjects introduce him to an Indian youth and maiden they found wandering around. Pleased by these youngsters' good posture, Coyocophile invites them to a feast.

The youth says he is Quaman of the Quapaws, and his mate is Osa of the Osage tribe.

From off-stage is heard "Peace Song of the Quapaws" and then other Indian men and women troop onstage and are invited to feast.

Coyocophile assigns territory to both tribes and bids them always live at peace. The Gazette elaborates: "It is said to be historically true that the Indians of Arkansas were never concerned in uprisings and outrages."

Next we see 11 "historical tableaux" featuring conquistadors, covered wagons, old plantation days, Confederates off to war, blah blah, right up to "the Modern Era," with skyscrapers and airships. The honk of an automobile is heard, and modern Little Rock youths and maidens crowd the stage.

They meet a very old Indian. Guess who he was. Yes, he was Tom, descendant of Quaman, last of the Quapaws. Tom tells how Quapaws saved and served the palefaces. I am not making this up, you can read it yourself in the Oct. 11, 1914, Gazette.

Then Coyocophile wakes up. He sees that modern humans are even more beautiful than Quaman was. He wants to be pretty, too. Thunder sounds and "lo! in a twinkling all is changed." Coyocophile stands erect, a man, and all his subjects — the frog, the alligator, the bear, the deer, the horse — also become beautiful humans.

Invited to choose a queen, he selects the former turtle dove for her sweet, sweet voice used to lull him to sleep. The curtain descends upon a bridal chorus.